Copyright 2021 - All Right Reserved
Home Opinion Jakande: His legacies as the modern builder of Lagos
Opinion 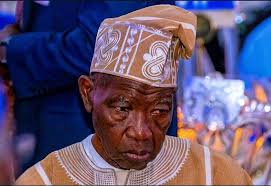 I have restrained myself from getting involved in this kind of controversy. Which was why I made strenuous effort from being drawn into the brickbat between Bayo Onanuga/Dele Alake on the one hand and Arise News on the other despite pressure on me to say something.

“Oga, this is shameful, won’t you say something to guide us?” I resisted the pressure.

The drive for political power in this clime has no respect for anything. Not for honour, nor anything with the tinge of sublimity! You will be hailed for calling black white and white, black even on the platform of journalists who are not just observers but chroniclers of developments and events.

How can anybody say LASU was a glorified school? Oh, really?

Metro line was stopped by Buhari junta, not by NPN! What NPN attempted to do was to stop the establishment of Lagos Radio and Television. The Shagari Administration sought to vest Federal Radio Corporation of Nigeria the power to establish and operate state radio stations.  The Nigerian Television Authority was to set up at least one television station in each state of the Federation. They said states setting up radios and TV would amount to proliferation of broadcast stations. They did not know the person they were dealing with—someone who for years  was the President of IPI, the founder of the Nigeria Guild of Editors, the founder of Newspapers Proprietors Association, (NPAN); founder of NIJ, managing director/editor of the Nigerian Tribune, one who led the media in battles with the military as well as irresponsible civilian administrations. Jakande fought it and was victorious.

His administration was, therefore, the first state government to own a TV Station in Nigeria.

The functional primary schools he built to abolish the three session system he inherited was recommended by UNESCO for developing countries. When  Gbolahan Mudasiru came, he started to upgrade them. And he did a lot.

The teachers were the highest paid in the nation with right to car and housing loans like the state civil servants.

Housing: He embarked on a crash programme to build 50,000 housing units in four years. For 17 years before his ascension, LEDB, the state housing corporation succeeded in building only 4,502 housing units. His focus was on low and medium classes of our people. He succeeded in delivering 21,000. An allottee was required to pay only N4,000 as deposit. Whoever was unable afford that could pay just N1,000 and he would be eligible for a loan to balance up from LBIC. He thus established 18 housing estates in the state. A two-bedroom flat was sold for N6,000 and three-bedroom unit  N8,000.

I have read it in several places that by 1999, Lagos could only generate N600million.

Let’s hear it from the horse’s mouth who came to the saddle 20 years earlier, the one and only LKJ (Jakande): “We generated enough to meet our obligations without dependence on the Federal Account.” And so, Lagos State under Jakande was the first State Government in the land to announce a billion Naira budget and it gave loans to some state governments, notably Borno!

Jakande was the one who established Lagos State Ministry of Environment under the headship of Alabi Masha. He then set up Lagos State Waste Disposal Board with Alhaji Mumini as chairman. Anyone of my generation who knew Mumini would remember the kind of person he was, his unremitted application to assigned tasks.

Equipped with a fleet of 157 vehicles, 21 mechanical shovels and 2,000 movable dust bins in every part of the metropolis, the board collected 400,000 tonnes of refuse yearly. Of course the population of Lagos has increased by leaps, it should necessarily be expected of his successors to roll up their sleeves and Fashola fitted the bill. Fashola did remarkably well. We should remember that because of his shine it was a tug of war to have him get the nod of the city fathers for a second term! Ambode continued in the line of Fashola to tackle the refuse problem successful. Was it not part of building a cleaner Lagos that Fashola embarked on environmental transformation everywhere, turning Lagos into an exemplary leafy surroundings—plants, flowers, green lawns even in the most unexpected terrain?

I won’t want to bore the platform with the roads Jakande built and paved nor his strategy to turn the finances of Lagos State around. Presently, I will mention just one area. Strategy on roads.

Hold it: His strategy was to establish a Works Management Board. One unique activity of that board was that it had its own asphalt plant which had the capacity to produce 200 tons of asphalt an hour!  So it was possible to build neighborhood roads without much stress. That board also constructed 94 public buildings including Lagos State House of Assembly; rebuilding of Onikan Stadium; Coconut industries in Badagry as well as Conference Hall in that town!

Perhaps worthy of mentioning because of the exaggerated claims we are fed with on this platform is Eti-Osa-Lekki which stretched to Epe! And also perhaps Epe-Ijebu-Ode (12,000 meters)! Ha! Let me quickly mention the opening up of Victoria Island-Lekki!

I have not exhausted all that Jakande did to be the modern builder of Lagos.

As I said earlier, I have refrained from getting involved in this kind of thing. Were we living on the moon? Are we children? It is rude to attempt to pull wool over the faces of journalists on their own platform, many of them very senior journalists who, if not editors in the period under review, were line editors!

What constitutes the index of development, of enlightenment if not education, environment and health, transportation? Jakande built LASU, polytechnic colleges and schools which form the foundation of civilization anywhere. He met 17 hospitals since the colonial days, within four years he increased the facilities to 22. He set up 10 mini waterworks which is a tool of sanitation. He established ferry service from Festac to Marina and wool is being pulled over our faces as if we are children and uninformed—on this platform!!!

▪︎Mr. Bonuola, founding Editor and later Managing Director of The Guardian contributed this to in-housedebate on The Guardian Staff WhatsApp Platform.

From “Muslim-Muslim” to “Is He Really a Muslim?”