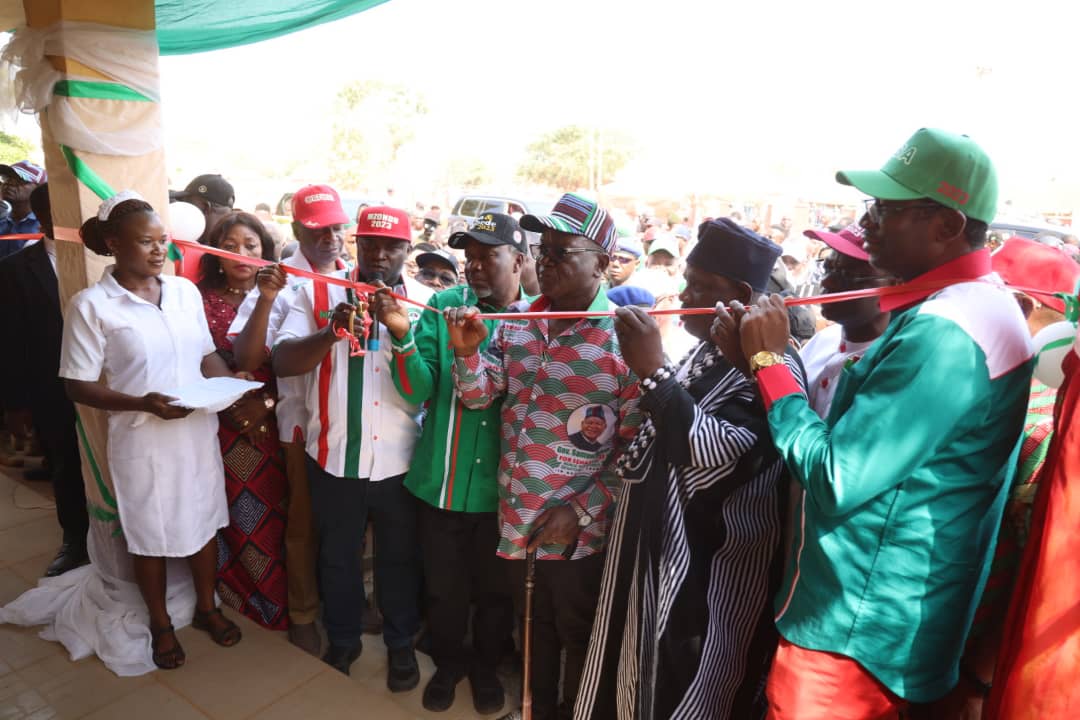 Governor Ortom at the commissioning of the General Hospital, Gbajimba directed the Ministry of Health to activate the machinery for the recruitment of more nurses to take care of the shortfall in healthcare personnel.

Senator Jev who commissioned the 30.5 kilometer Gbajimba-Tse-Ortom to Tse-Upev-Tse-Akaahena on the Nasarawa State border road project, lauded Governor Ortom for giving priority to rural development, stating that it was a demonstration of keeping campaign promises.

Senator Suswam represented by the Member representing Makurdi/Guma Federal Constituency, Hon. Bem Mzondu, who commissioned the rehabilitated General Hospital , Gbajimba, praised Ortom’s infrastructural development, particularly his achievements in the healthcare sector, saying it has given a new lease of life for the people.

In his remarks, Governor Ortom said the newly commissioned road has opened up easy access to the communities as well as facilitated response by security agencies in event of distress calls.

The Governor disclosed that the comprehensive renovation of the Gbajimba General Hospital and Doctors Quarters and other hospitals across the state cost the sum of N1.2billion naira and was his administration’s modest commitment to ensuring quality healthcare delivery in the state.

On the complaint by the Commissioner of Health and Human Services, Dr. Joseph Ngbea on the shortfall of personnel in the healthcare sector in the State, Governor Ortom directed the Ministry of Health and Human Services to immediately activate the machinery for recruitment of more personnel, particularly nurses to ensure efficient service delivery.

Commissioner for Rural Development and Cooperatives, Engr Victor Ukaha said the 30.5 km road project was executed at the sum over 2 billion Naira by Triacta Nigeria Limited.

He said the construction of the road had made life more comfortable for the people of the community and appreciated Governor Ortom for providing funds for the execution of the project.

Commissioner for Health and Human Services, Dr. Ngbea extolled the Governor’s commitment to the transformation of the healthcare sector in the state, pointing out the several projects the Ortom administration has executed in the sector.

He appealed to the Governor to also approve an ambulance for the hospital as well as recruitment of more healthcare personnel to augment the shortfall that was being experienced.

Chairman of Guma Local Government, Dr. Mike Ubah and the Ter Guma, His Royal Highness, Chief Dennis Shemberga in separate remarks thanked Governor Ortom for the provision of infrastructure in the area, which they said had added value to socio-economic development.

The commissioning of the projects in Guma local government was part of the programmes lined up for the Statewide campaign of the Peoples Democratic Party, PDP.