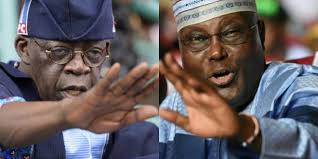 It is about 48 hours to go for all to see if the spokesman of the All Progressives Congress (APC) Presidential Campaign Council (PCC), Mr. Festus Keyamo, will make good his vow, on Monday, to take the presidential candidate of the Peoples Democratic Party (PDP), former Vice President Atiku Abubakar, to court over corruption-related matters, if the Economic and Financial Crimes Commission (EFCC), Independent Corruption and Other Offences Commission, and the Code of Conduct Tribunal do not do so.

In a petition he sent to three agencies, Keyamo gave them a 72-hour deadline to prosecute Atiku or he would initiate a court action to compel them to act.

However, in a response on the same day, the PDP’s national spokesman, Mr. Debo Ologunagba, said the call for Atiku’s arrest is intended to divert public attention from the alleged atrocious record of Tinubu and the vexatious misrule of the APC.

His words: “In contrast however, the APC Presidential Candidate has litany of confirmed legal impediments on very grave issues including those that border on international crime, namely; trafficking in narcotic and taking proceeds of narcotic.

“The effect of the conviction and forfeiture of the sum of $460,000 by Asiwaju Tinubu confirms that he is ineligible and not qualified to contest for the Office of the President of Nigeria as required by the Constitution of the Federal Republic of Nigeria, 1999 (as amended).

“For clarity, Section 137 (1) (d) of the Constitution of Federal Republic of Nigeria, 1999 (as amended) provides that 🙁 1) “A person shall not be qualified for election to the office of President if… (d) He is under a sentence of death imposed by any competent court of law or tribunal in Nigeria or a sentence of imprisonment or fine for any offence involving dishonesty or fraud (by whatever name called) or for any other offence, imposed on him by ANY COURT or tribunal or substituted by a competent authority for any other sentence imposed on him by such a court or tribunal.

“Having been convicted, sentenced and fined for narcotic trafficking in a criminal suit filed pursuant to the United States Criminal Code, Asiwaju Tinubu cannot by virtue of Section 137 (1)(d) of the Constitution of the Federal Republic of Nigeria 1999 (as amended) seek office as President of Nigeria.

“The APC Presidential Candidate has not come out to deny the conviction and forfeiture or show evidence of any attempt by him to challenge or appeal the judgment, apparently believing that it will slide with time. Asiwaju Tinubu ought to know that time does not run against the State in a criminal matter!

“He should therefore withdraw from the Presidential race having been found ineligible and not qualified to run or to contest for the Office of the President of Nigeria under the provisions of the Nigerian Constitution,” Ologunagba added.

SEVENTY-TWO (72) HOUR ULTIMATUM TO ARREST/INVITE, INTERROGATE AND PROSECUTE  ONE ALHAJI ATIKU ABUBAKAR FOR:

3.      OFFENCE OF  CRIMINAL BREACH OF TRUST AND CRIMINAL MISAPPROPRIATION

I write this petition in three capacities:

(1).    Firstly, I am a legal practitioner and a member of the Inner Bar (a Senior Advocate of Nigeria) who has sworn on oath to always uphold and defend the Constitution of the Federal Republic of Nigeria and all laws of the land.

(2).    Secondly, I bring this petition as an ordinary concerned Nigerian citizen, though I am a Minister of the Federal Republic of Nigeria (a Federal Cabinet member) and the Director of Public Affairs and Chief Spokesperson of the APC Presidential Campaign Council. I have spent the last 30 years of my life using the instrumentality of the law to fight injustice, fight for the enthronement of democracy, the Rule of Law and to rid our Nation of corruption. My cabinet status therefore, cannot deny me of my right to continue to use the instrumentality of the law to bring those who have violated our laws to book. I am not about to relent in this role I chose for myself many years ago.

FACTS OF THE MATTER

For about a week now, Nigerians have been in shock over the public revelations of a whistleblower, Mr. Michael Achimugu, who has provided the nation with evidence of letters of appointment by Alhaji Atiku Abubakar, emails, documents, audio clips, sworn affidavit and his direct oral evidence as to how Alhaji Atiku Abubakar, who happens to be the Presidential Candidate of the Peoples Democratic Party (PDP), during his tenure as Vice-President of Nigeria between 1999 and 2007, colluded with his then boss, President Olusegun Obasanjo, to fleece the country and steal public funds using what he termed as “Special Purpose Vehicles” (SPVs). Those SPVs were companies Atiku admittedly registered upon assumption of office as Vice-President (with the approval of President Olusegun Obasanjo) using “trusted allies” as shareholders and Directors. The purpose was to divert government contracts to these companies as “consultants” and then pay monies into these companies and use those monies to fund the PDP and their private businesses and family activities.

I hereby make available Certified True Copies of the affidavit sworn to and released to the public by the whistleblower, Mr. Michael Achimugu, giving graphic details of all that transpired, including attached documents.

POSSIBLE INFRACTIONS OF THE LAW

From the oral account of the whistleblower, the voice notes and all other supporting documents, these are the possible infractions of the law Atiku Abubakar has committed and I urge his prosecution along these areas:

5.      “A public officer shall not put himself in a position where his personal interest conflicts with his duties and responsibilities.

10.    (1) A public officer shall not ask for or accept property or benefits of any kind for himself or any other person on account of anything done or omitted to be done by him in the discharge of his duties.

13.    A public officer shall not do or direct to be done, in abuse of his office, any act prejudicial to the rights of any other person, knowing that such act is unlawful or contrary to any government policy.

17.    A public office who does any act prohibited by this Act through a nominee, trustee or other agent shall be deemed ipso facto to have committed a breach of this Act.”

Section 18(2) of The Money Laundering (Prevention and Prohibition) Act, 2022:

(2)     “Any person or body corporate, in or outside Nigeria, who directly or indirectly—

(a) conceals or disguises the origin of,
(b) converts or transfers,
(c) removes from the jurisdiction, or

(d) acquires, uses, retains or takes possession or control of any fund or property, intentionally, knowingly or reasonably ought to have known that such fund or property is, or forms part of the proceeds of an unlawful act, commits an offence of money laundering under this Act.

“Whoever, being in any manner entrusted with property or with any dominion over property, dishonestly misappropriates or converts to his own use that property or dishonestly uses or disposes of that property in violation of any direction of law prescribing the mode in which such trust is to be discharged or of any legal contract express or implied, which he has made touching the discharge of such trust, or wilfully suffers any other person so to do, commits criminal breach of trust.”

“When two or more persons, agree to do or cause to be done

(b)     an act which is not illegal by illegal means, such an agreement is called a criminal conspiracy.”

I understand that the law-enforcement agencies may be reluctant to act simply because of the perception of persecution of a Presidential candidate that this may evoke.

However, facts are sacred. The facts so far presented to the world clearly indicate that Atiku Abubakar has a case to answer. In other climes when such serious allegations arose in the middle of campaigns, the law-enforcement agencies acted decisively. Recall, in 2016, in the middle of campaigns for the exalted office of the Presidency of the United States, the FBI opened investigation into allegation of misuse of private emails against Hillary Clinton when she was Secretary of State. In fact, the case was referred to the Justice Department for likely prosecution few weeks to actual voting.

TAKE NOTICE that because this matter is of great national importance, I expect you to act with alacrity and a sense of duty within Seventy-Two (72) hours of the receipt of this petition.

TAKE FURTHER NOTICE that if you fail, refuse and/or neglect to act, I shall be proceeding to court to compel you to act.

The ball is in your court and Nigerians are waiting and watching.