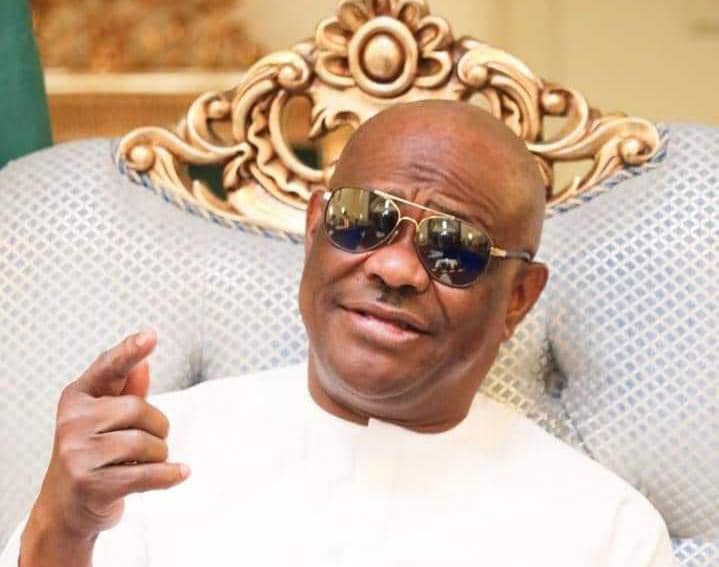 The push-back has started: Governor Nyesom Wike of Rivers state has sworn that he has never touch funds meant for Local Government Areas since he came on board in 2015 and has challenged President Buhari to name the governors who diverted local government allocations in the country.

On Thursday, President Buhari stirred the hornet’s nest when he told of a personal knowledge of how governors and council chairmen impoverish the grassroots of the country by misappropriating and embezzling local government funds. It came a day after the Federal Government, through the Minister for State for Budget and National Planning, Mr. Clement Agba, accused state governments of being responsible for widespread poverty in the country.

Agba accused some states of building flyover bridges in state capitals and airports in the face of abject poverty in their rural areas.

Commissioning a project in Port Harcourt on Friday, Gov. Wike said” I challenge Mr. President, you must come out and tell Nigerians those committing this offence.

“So Mr President, tell us who are those people? You know them, tell us.

“I’m not one of those governors. Mr President tells Nigerians that the Integrity Governors are not part of them.

“Do us a favour to announce all those states that are taking local government funds”.

Wike, known for commissioning fly-over bridges in Port Harcourt was, however, silent on Agba’s accusations.

Said Buhari on Thursday at a parley with members of the Senior Executive Course (SEC) No. 44 (2022) of the National Institute for Policy and Strategic Studies, Kuru, near Jos, Plateau State: “This is my personal experience, if the money from the Federation Account to the State is about N100 million, N50 million will be sent to the Chairman but he will sign that he received N100 million. The Governor will pocket the balance and share it with whoever he wants to share it with.

“And then the Chairman of the local government must see how much he must pay in salaries and to hell with development. When he pays the salaries of the big man, the balance he will put in his pocket.

“This is what’s happening. This is Nigeria. It’s a terrible thing; you cannot say the person who was doing this is not educated.”

Agba had blamed the governors for priotising the construction of heavy pieces of infrastructure such as bridges and airports in cities rather than improving the lives of the rural poor.

According to him, 72% of Nigeria’s poor live in neglected rural communities.

He told journalists shortly after this week’s Federal Executive Council meeting chaired by the President Muhammadu Buhari: “Right now 70 per cent of our people live in rural areas. They produce 90 per cent of what we eat. And unfortunately 60 per cent of what they produce is lost due to post harvest loss and it does not get to the market.

“I think from the Federal Government’s side we are doing our best. But we need to say that rather than governors continuing to compete to take loans to build airports that are not necessary, where they have other airports so close to them, or governors now competing to build flyovers all over the place, we appeal that they should concentrate on building rural roads so that the farmer can at least get their products to the market.”

Citing the findings of a recent survey he conducted across the 109 senatorial districts nationwide, the Minister said Sokoto state ranked the highest on the poverty scale, followed by the oil-rich state of Bayelsa.

“The result clearly shows that 72 per cent of poverty is in the rural areas. It also showed clearly that Sokoto State is leading in poverty with 91 per cent.

“But the surprising thing is Bayelsa being the second in terms of poverty rating in the country. So, you see the issue is not about availability of money. But it has to do with the application of money,” he said.

Agba lamented that despite the federal government’s intervention to alleviate poverty, the results did not reflect the amount of investment made in the area.

He said, “In the course of working on the national development plan, we looked at previous plans and asked why they didn’t do as much as expected. We also looked at the issues of the National Social Investment Programme.

“At the federal level, the government is putting out so much money but not seeing so much reflection in terms of money that has been put into alleviating poverty, which is one of the reasons the government also put in place the national poverty reduction with growth strategy.

“But if the federal government puts the entire income that it earns into all of this without some form of complementarity from the state governments in playing their part, it will seem as if we are throwing money in the pond.”

On food inflation, Agba said though states were in charge of agricultural land, they did not invest in them for the desired effect on their rural citizens.

He noted that farm products were affordable at the point of harvest but became expensive due to poor rural-urban roads, causing supply chain disruptions.

“UNIDO report shows us in terms of employment, the MSMEs employ 70 per cent of our people. So, you can imagine how much progress we will make when there are roads and power in these rural areas.

“In terms of agriculture, you find out that the federal government doesn’t have land that they would plant. The government has pushed for the Anchor Borrowers programme and that is going on very well but the state control lands states. They are the ones to provide land for agriculture. They are not investing in that. They would rather build skyscrapers in a city where people will see and clap but the skyscrapers do not put food on the table.