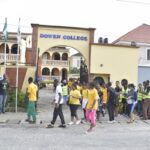 One year after the death of Sylvester Oromoni Jnr allegedly owing to injuries sustained from bullying and assault by some senior students at Dowen College, Lagos, the Nigeria Union of Journalists, Men Against Rape Foundation (MARF) and Make A Difference Initiative  (MAD) have lamented that family is yet to get closure.

Speaking at ‘a Night of Songs and Poetry’ organised by both organisations, the chairman of Nigeria Union of Journalists, Abuja Council, Comrade Emmanuel Ogbeche said he was troubled that the case has still not been concluded after one year.

“This delay is unprecedented. Lagos state is famed for expeditious action in cases like this. But in this instant case of Sylvester Oromoni Jnr they have not used same speed”, Ogbeche noted.

He said the Lagos State Government owed the Oromoni family closure in order for them to commence the healing process.

In his welcome remark, Executive Director of Men Against Rape Foundation, Lemmy Ughegbe likened the delay in the Sylvester case by the Lagos state coroner to “an open sore left untreated.”

“It is disheartening that one year after a sore was inflicted in the soul of the Oromoni family, the wound has remained open and untreated. This is unacceptable. The family deserves that the open sore be treated, so they can begin the healing process”, Ughegbe stated.

“When you leave a sore open and untreated it can generate to a cancerous sore. The death of Sylvester Jnr is an open sore that is become a cancer for the family because the Lagos State Government seems to have put this case in abeyance with nothing heard about the coroner inquest for months”, he lamented.

“This protracted inquest is unusual and protracted as we note that even the Coroner Inquest of the Ikoyi building collapse of 2021 where 52 persons died did and the Ojota Yoruba rally where one Miss Jumoke Oyeleke died never took this long and they have since been concluded their Inquest”, he noted

Ughegbe said “exactly one year today, the Oromoni family was confronted with the tragedy of losing their son in traumatising circumstances. It is not right that one year after, they do not have closure and therefore the healing process cannot commence.”

“Today November 30, 2022, we are using poetry and songs to tell the sad and depressing story of how 12 year old student of Dowen College, Sylvester Oromoni Jnr died while groaning in excruciating pain allegedly as a result of assault by bullies in his school”, he stated.

He noted that “it is exactly one year today that he died and the Lagos State Government and the coroner seem to have gone to sleep.”

He demanded an expedited action by the state and their findings made known urgently, adding that “nothing excuses the case lingering for so long. The family needs to heal.”

“The Oromonis have lived for a full year now with trauma. I appeal to Lagos state Government to expedite action with the coroner inquest so that the family can have closure and begin the process of healing”, he appealed.

In her own comment, founder of Jewels Hive Initiative, Barrister Oluwatoyin Falaye prayed for the Lord to continue to strengthen the family even as she appealed for a decision to be reached on the case.

“I lift the Oromonis in prayers. No parent should experience the loss of their children. It is is even more traumatising when the loss is dogged in controversy of bullying and assault”, she noted.

She urged quick action to resolve the case, according to her, “it is not rocket science and the investigation cannot be unending.”