▪︎ says no crack in rank of justices 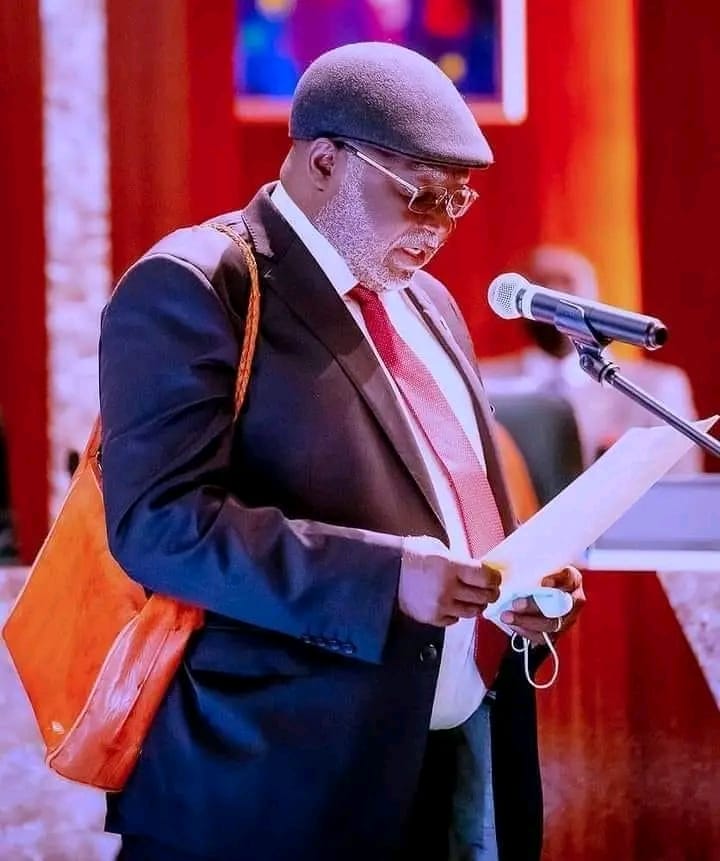 The Supreme Court on Tuesday in Abuja dismissed an insinuation that the Chief Justice of Nigeria, CJN, Olukayode Ariwoola, was subjected to Interrogation by the Department of the State Service DSS over alleged pro-Wike political remarks.

The apex court also debunked claims that five Justices of the Court have demanded resignation from office by CJN over the same issue.

In a statement by the Director of Information and  Press of the Court, Dr Festus Akande, the court warned those peddling the rumours to desist in their own interest.

The reaction of the Supreme Court is in response to a publication by an online medium which reported that Justice Ariwoola has been grilled by DSS over his alleged political remarks in Port Harcourt at a public function.

The statement read in part “We have read with dismay and shock a publication with the above caption by an online media outfit, “People’s Gazette,” alleging that the Chief Justice of Nigeria, Hon. Justice Olukayode Ariwoola, was grilled by the DSS for the remarks he made in ‘Port Harcourt at a state banquet’ and that ‘five Justices of Supreme Court are calling for his resignation.’

“Just like our earlier press statement debunking this barefaced falsehood and mischievous antics aimed at scoring very cheap and unpopular political gains in this era of aggressive and mudslinging politicking.

“We wish to state in very clear and unmistaken terms, that this is yet another round of the avalanche of lies that have been disingenuously packaged by individuals with unenviable pedigree to malign the character and personality of not just the CJN but several other Judicial Officers that they considered to be too unpliable and principled to be approached for any form of underhand dealings, especially as election cases (petitions) will soon be streaming to the tribunals (courts) for adjudication.

“It has become very obvious that those with sinister motives have perfected plans to unleash all manner of coordinated attacks on Judicial Officers, starting from the CJN with a view to arm-twisting and blackmailing and ridiculing them to silence, ultimately for their ulterior motives.

“For sure, it will only take an undiscerning mind to believe this string of falsehood, misinformation and blackmail. Nigerians are much wiser to fall for this armchair criticism and disingenuous sponsorships of paid crowds who masquerade as ‘civil society organizations’ to help them further their inordinate ambition of gagging and fettering the Nigerian Judiciary so that they could cowardly do their biddings.

“The publication, which was laced with tissues of lies, non-existent sources of information and unsubstantiated claims, clearly showed the unwholesome intentions of the authors.

“For the records, no single Justice of the Supreme has asked the CJN to resign, and no Justice of Supreme Court has or is writing any letter of protest whatsoever.

“This stream of falsehood, as usual, is flowing from the same discredited source that is hell-bent on destroying the Judiciary for some selfish interest.

“The Supreme Court Justices are united and firmly behind the CJN; and are, as usual, all working assiduously to dispense justice without fear or favour.

“Neither the CJN nor the Honourable Justices of the Supreme Court or other Courts for that matter, are politicians, so, none of them should be dragged into politics in any form whatsoever.

“Our advice to this set of rabble-rousers whose stock in trade is character assassination via dissemination of false information to create tension and disaffection, is to have a rethink and engage in meaningful productive activities that will move the nation forward. A word is enough for the wise.”

Recall that at event in Port Harcourt, Rivers State, that generated a controversy, because it was considered political for the Chief Justice to have made. He said then: “…I understand will continue to commission projects till his last day in office. There are projects wide open all over the place. And that’s why we should not be scared to have these men of Integrity Group, and I’m happy that my home governor is one because, you know, he will, he will try to imitate his friend and in-law because if—for my governor, you know, so His Excellency Governor Wike will always threaten that he will call back his sister if my governor fails to play ball.

“And that’s why if you see him following His Excellency [laughter from audience], my governor is afraid, you now, of his wife being recalled [audience laughter]. So, please, eh, I saw governor Wike almost mad with people. We have kept people waiting for too long. I shall not keep you waiting further. You are invited for dinner, and it’s almost getting late for dinner. Please enjoy your dinner, sumptuous one, and God bless you. We see tomorrow.”