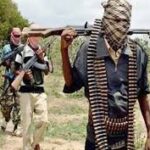 Troops of Operation Hadarin Daji have apprehended five bandits’ collaborators at Daudawa village in Faskari Local Government Area of Katsina State with the sum of N19.5 million in their possession.

The Director, Defence Media Operations, Maj.-Gen. Musa Danmadami, said this at the bi-weekly update on military operations across the country, on Thursday in Abuja.

Danmadami said the arrest was made on Nov. 17 during a stop and search operation, adding that the troops also recovered a vehicle and five mobile phones from the suspects.

He said the troops also neutralised three bandits at Yambuki village in Zurmi Local Government Area of Zamfara on Nov. 20 while others fled with gunshot wounds.

He added that troops also arrested a suspected gun runner with 269 rounds of 7.62mm special in his possession while on his way from Zaria to Damari village in Birnin Magaji Local Government Area of Zamfara.

The defence spokesman said the air component on Nov. 18 carried out strikes on the enclave of notorious terrorist leader and gun runner, Malam Illa at Manawa village in Shinkafi Local Government Area of Zamfara.

“Following the air strike on the location, it was confirmed that seven terrorists were neutralized while Mallam Illa and some terrorists narrowly escaped with critical injuries,” he said.

According to him, the arrested criminals were revealed to be foot soldiers of a notorious bandit leader, Iorkoso Tyopaha, operating within Kaamen village.

“Equally on Nov. 23, military troops in conjunction with the Nigerian Police personnel arrested a suspected criminal at Apo Mechanic Village in Abuja Municipal Area Council in possession of one AK 47 rifle and a pistol concealed in a bag inside his vehicle.

He said that the raid led to the arrest of 21 suspected criminals while over 200 motorcycles were recovered and destroyed during the operation.

Danmadami said the troops had within the weeks in focus rescued nine civilians, neutralised three criminals and apprehended 54 criminals.