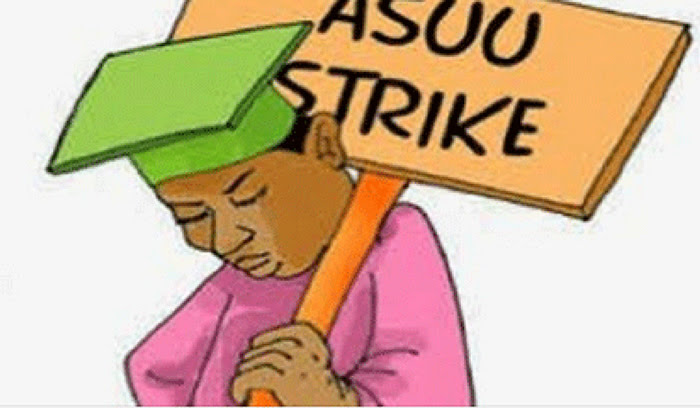 There are indications that the Academic Staff Union of Universities (ASUU) may return to the trenches, continuing their strike in the new year if at the end of this year, they are not paid for the eight months they were on strike between February and mid October.

Everyday.ng gathered that though the university lecturers were paid fully for the month of November by the Federal Government, they are planning to navigate round the National Industrial Court of Nigeria (NICN) ruling that ordered them back last October.

In October 2022, they were paid pro-rata (half-pay) for the days they worked, an action justified by the Minister of Labour and Employment, Dr. Chris Ngige.

In recent times, members of the union have been protesting been paid half their October salary, while eight months have been withheld, a move an insider said is a prelude to a full-blown strike.

The ASUU branch Chairman, Dr Kassim Umaru, during the protest said that decision reached immediately after its congress called on well meaning Nigerians to urge the Federal Government to honour the union’s demands.

Umaru said that university lecturers were not casual staffers and could not be paid half salary, adding that the National Executive Council (NEC) of ASUU would decide on an action if the government failed to address the issues.

He called on the Speaker of the House of Representatives, Mr Femi Gbajabiamila, to honour agreement reached with the union, adding that the union was forced to the classroom through a court injunction.

“We are here this afternoon to show our displeasure to the Federal Government that it is not all over by forcing us through court injunction and intimidating us by holding our salaries.

“We are not going to give up until the Federal Government do the needful by paying our withdrew salaries and also honouring the agreement signed in 2020.

“The government has signed several agreements with our union, not once, not twice, not three times, but refused to honour the agreement.

“We are telling the public, traditional rulers, religious leaders, well meaning Nigerians, students and parents that all is not well in the Nigerian universities,” he said.

The chairman said that the people should pressure the government to do the needful by honouring the agreement and paying their salaries.

He stressed that lecturers were not casual workers and should be paid.

”We are frustrated and we can no longer take it, enough is enough and we are not going to give up.

“We are not going to take it and we are registering our displeasure that Nigerians should know that anything that happens, ASUU should not be called for anything.

“The speaker has intervened and we have given him the honour, but the Federal Government should do what it has said.

“If the Federal Government is adamant, the NEC of the union will go back to drawing board, access all the issues and we will take the necessary action,” he threatened.

In the University of Ilorin, the chapter, on Monday protested what they called casualisation of intellectual workers in the country.

Prof. Rasheed Adeoye, the former ASUU Chairman of the university, described half salaries reportedly paid by government to members of the union for October as unacceptable and would be resisted by the union.

“As a law abiding union, we have heeded the directive of the court which directed that we resume to our duty posts while the substantive matter is being heard.

“However, after resumption from strike and to our utmost dismay, government decided that half salaries be paid to our members for the month of October, 2022. This development is unacceptable and would be resisted by our union.

“The fact is that academics are not casual workers. The law of the land is also clear on this; indeed, the National Industrial Court made it clear in a landmark judgment in 2020 that tenured staff cannot be paid pro-rata,” he said.

Adeoye pointed out that the Minister of Labour should be aware that academic staff engage in so many activities aside teaching duties.

“In fact, the primary duty of an academic staff is research, and there are other activities such as that that continue to engage their attention irrespective of strike action or whether school is in session or not.

“Let me assure you that our union is resolved to continue to call the attention of government to its responsibilities despite the obnoxious treatment being meted out to us by government.

“To this effect, though we have resumed work in our university, government ignoble stance of withholding our eight months’ salaries, which is based on its ill-advised policy of ‘no work, no pay’ is set to trigger fresh crisis,” he warned.

Prof Olatunji Abdulganiyu, the Secretary of the union, asserted that ASUU would respond appropriately to the unpopular policy.

He threatened that members would abandon the works that have accumulated for those period which government has falsely claimed that our members have not worked.

“Members of the public are hereby sensitised and put on notice again that fresh crisis, which would surpass all previous ones, is looming again in Nigerian Universities.

“Our members cannot and would not continue to do free work that would not be remunerated. We hope that with this notice, all relevant stakeholders, who have the ears of government, would act fast before the fragile peace restored on our campuses nationwide collapses.

“Our union and its members should not be held responsible for the consequences that its actions, in response to the crude wickedness of the Nigerian state, would have on all stakeholders,” he said.

The ASUU leader also said that the demands of the union, included “release of Revitalisation Fund to the public institutions in the country, release of White Paper of Visitation Panels to public universities which our union forced government to convene.

“Others are renegotiation of the 2009 ASUU/FGN Agreement and the termination of the obnoxious, ineffective and corrupt laden IPPIS as payment platform in the Nigeria public system, among others”.