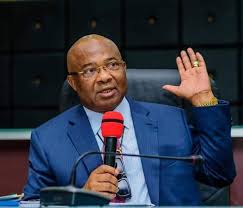 The Nigeria Bar Association (NBA), has indicted a Senior Advocate of Nigeria, Chief Louis Alozie, SAN, Imo State Government and Commissioner of Police in the state, Mohammed Ahmed Barde for their roles in the crisis that led to closure of the National Industrial Court in Owerri.

A report by the fact-finding Committee set up by the Owerri branch of the NBA to look into the remote and immediate causes of the crisis, said they were complict in the crisis that culminated to the closure of the court.

The Owerri division of the National Industrial Court, was on June 6, 2022 closed down indefinitely on the orders of the President of the court, Justice Benedict Kanyip.

The Court President made the declaration pursuant to sections 21(1) & (2) of the NICN Civil Procedure Rules 2017 and other enabling powers.

The closure was necessitated by the need to protect the lives of the Judge/staff and properties of the Court in view of the incessant cases of obstruction of justice, intimidation, and harassment of the judge and staff of the court as well as unlawful arrest and abduction of the staff of the court by agents of the Imo State government.

Four staff of the court, Nze Moses; Akoma Jeremiah; Ikedi Amadi and Chima Emeka Ndukwe were abducted while performing their lawful duty  of executing the judgment on Friday, June 3, 2022, in suit no: NICN/OW/16M/2022, between former deputy Governor of Imo State, Prince Eze Madumere  and Governor of Imo State, Zenith Bank Plc, the Attorney General of Imo state and the Imo state government.

The Industrial Court had on June 1, 2022, granted the judgment creditor and former Deputy Governor of Imo State, Prince Eze Madumere, leave to enforce the garnishee order absolute, made on May 27, 2022, against the garnishee bank (Zenith Bank Plc), by sealing off all the bank premises in Owerri, Imo state.

In its 21-page report dated September 14, 2022,  the Committee stated that the Imo state government was grossly negligent with regards to the case which led to its time running out to file its defence.

“Having failed to obtain any favourable decision in both the substantive suit and garnishee proceedings, the only legal option open to it was to proceed on appeal to challenge those decisions.

“The Defendants/Judgment Debtors rather chose the option of trickery and illegality, to wit: pitting its own High Court, a Court of co-ordinate jurisdiction, against the valid decisions of the National Industrial Court of Nigeria, Owerri Division. This is a gross abuse of the judicial process.

“The Committee further observed with regret that the conduct of the Learned Silk, L. M. Alozie, in this whole saga is reprehensible and condemnable for the following reasons:

M. Alozie, SAN by his own statement admitted that he contacted and spoke with the Judge of the National Industrial Court to discuss a matter he was conducting before the said Judge without informing and taking along the Counsel on the other side of the matter (that is; his Learned Brother Silk; K. C. O. Njemanze, SAN); a conduct in utter breach of the express provisions of the Rules of Professional Conduct.

“The Committee observed also that the Learned Silk seized every opportunity to level allegations against the person of the Divisional Registrar, Mrs. Joy Iwuchukwu, which allegations we found to be maliciously false and unfounded.

“The Committee had no doubt that the Government of Imo State and its Counsel, L. M. Alozie, SAN, adopted the most unprofessional, unconscionable, undemocratic and reprehensible abuse of the judicial process in dealing with the judgment and orders of the National Industrial Court of Nigeria, Owerri Division.

“It is most condemnable that the Government of Imo State which negligently failed to utilise the legal opportunities at its disposal at the time, to defend the action brought against it in Suit No.: NICN/OW/16/2019 or proceed on appeal against same, rather resorted in addition to the illegal judicial tricks and subterfuge afore-said, to a most reprehensible act of extra judicial self-help and impunity to intimidate the court and the person of Hon. Justice I. S. Galadima, the Divisional Registrar (DR) and other officers of the National Industrial Court. The acts specifically referred to include:

Prompting the Imo State Commissioner of Police to withdraw the orderlies and security details of His Lordship; organising touts and hoodlums to protest; carrying placards and burning vehicle tyres in front of the official residence of His Lordship, thereby exposing the Judge and his residence to the danger of physical mob attack.

“It becomes inescapably clear that Imo State Government employed every unlawful means to frustrate the valid judgment and orders of a duly constituted Court of law, especially, the intimidation of a Judicial Officer in the discharge of his lawful duties. Little wonder therefore, that the Government of Imo State has till date neglected to give to the President of the National Industrial Court of Nigeria a Security Council undertaking guaranteeing the safety of the Judge and staff of the NICN; Owerri Division as requested by His Lordship.

“The Committee found as a fact that the Imo State Commissioner of Police, CP Mohammed Ahmed Barde, was complicit in the deliberate frustration of the orders of the NICN as well as the harassment and intimidation of the Judge and staff of the Court when viewed against the prism of the following:

“The withdrawal of His Lordship’s orderlies was a calculated and deliberate exposure of his Lordship to danger, In fact, this enabled the mob action at the Judge’s residence to go unchallenged.

“The arrest and detention of the four members of staff of the said Court is not only illegal but also a further act of intimidation of that Court as an entity.

“The claim that he sent his men to carry out the orders of the State High Court is false in that the said High Court never ordered the unsealing of Zenith Bank which had been sealed in execution of the judgment/orders of the NICN.

“The arrest, assault, dehumanizing treatment and detention of the four members of staff of the NICN, Owerri Division and the impounding of the official vehicle of the NICN is a most condemnable act of brazen impunity and intimidation. It is also illegal as well as an actionable wrong against the assaulted staff afore-mentioned.”

Meanwhile, the Committee has appealed to the Imo State governor, Sen. Hope Uzodinma  to “as a matter of urgency convey to the President of the NICN the unreserved guarantee and assurance of the safety of the Judge of the NICN, the Divisional Registrar and all other staff of that Court in order not to strangulate any further the justice delivery machinery of the NICN nor impede the immediate resumption and smooth running of that Court.

An original or mere copy