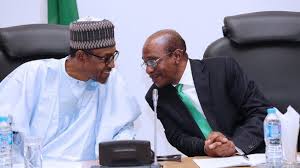 President Muhammadu Buhari on Sunday shut up his Minister of Finance, Budget and National Planning, Mrs. Zainab Ahmed, when he declared that the decision of the Central Bank of Nigeria (CBN) to launch new designs and replace high value Naira notes has his support and he is convinced that the nation will gain a lot by doing so.

According to his spokesman, Mr. Garba Shehu, in a statement on Sunday evening, the President spoke on a Hausa radio interview to be aired next Wednesday morning.

Recall that the Finance Minister had aired her own reservations while defending Budget 2023 at the Senate last Friday.

In answer to a question, she said: “Distinguished senators, we were not consulted at the Ministry of Finance by CBN on the planned Naira redesigning and cannot comment on it as regards merits or otherwise.

“However as a Nigerian privileged to be at the top of Nigeria’s fiscal management, the policy as rolled out at this time, portends serious consequences on value of Naira to other foreign currencies.

“I will, however, appeal to this committee to invite the CBN governor for required explanations as regards merits of the planned policy and rightness or otherwise of its implementation now.”

In the President’s interview to be aired on Tambari TV on Nilesat, President Buhari said reasons given to him by the CBN convinced him that the economy stood to benefit from reduction in inflation, currency counterfeiting and the excess cash in circulation.

He said he did not consider the period of three months for the change to the new notes as being short.

”People with illicit money buried under the soil will have a challenge with this but workers, businesses with legitimate incomes will face no difficulties at all.”

According to Shehu, the President, in the interview, also addressed issues of food security and national security, among others.

Emefiele, while announcing the plan to redesign the N200, N500, and N1,000 notes last Wednesday, claimed he had the approval of President Muhammadu Buhari to do so.

The CBN policy received a thumbs-up from the anti-graft agency, the Economic and Financial Crimes Commission ((EFCC).

But Ahmed position caused confusion as many began to wonder if there was a disagreement within the Federal Government on the new CBN policy.

The CBN, however, restated its position at the weekend, insisting it was backed by the law establishing it.

Mrs. Ahmed, on Friday, was responding to a question by Senator Opeyemi Bamidele, during the 2023 budget defence session at the Senate.

Bamidele noted that just two days after the CBN announced the planned policy, the Naira had tumbled in the foreign exchange market.

“Just two days after announcement of the policy, value of Naira to a US dollar has risen from N740 to N788 to a US dollar due to rush in exchange of stashed Naira notes for foreign currencies, particularly dollar.

“To me, the policy may be a well conceived one, but the timing, going by realities on ground, is very wrong as the Naira may fall to as low as N1,000 to a US dollar before January 31, 2023 fixed for full implementation of the policy.”

Last Wednesday the CBN announced plans to introduce redesigned currency notes in efforts to shore up the depreciating value of the naira.

The move, according to the CBN Governor, Mr. Godwin Emefiele, is to check currency hoarding and currency counterfeiting.

Below are the comments of Emefiele at the special press briefing:

Good afternoon Ladies and Gentlemen, and welcome
to this special press briefing of the Bank. We have called this gathering to inform relevant stakeholders and the general public of persisting concerns we are facing with the management of our current series of bank notes, and currency in circulation, particularly those outside the banking system in Nigeria.

As you all may be aware, currency management is a
key function of the Central Bank of Nigeria, as enshrined in Section 2 (b) of the CBN Act 2007. Indeed, the integrity of a local legal tender, the efficiency of its supply, as well as its efficacy in the conduct of monetary policy are some of the hallmarks of a great Central Bank.

In recent times, however, currency management has faced several daunting challenges that have continued to grow in scale and sophistication with attendant and unintended consequences for the integrity of both the CBN and the country.

These challenges primarily include:
Significant hoarding of bank notes by members of the public, with statistics showing that over 80 percent of currency in circulation are outside the vaults of commercial banks;
Worsening shortage of clean and fit bank notes with attendant negative perception of the CBN
and increased risk to financial stability;
Increasing ease and risk of counterfeiting evidenced by several security reports.

Indeed, recent development in photographic technology and advancements in printing devices have made counterfeiting relatively easier. In recent years, the CBN has recorded significantly higher rates of counterfeiting especially at the higher denominations of N500 and N1,000 banknotes.

Although global best practice is for central banks to redesign, produce and circulate new local legal tender every 5–8 years, the Naira has not been redesigned in the last 20 years.

On the basis of these trends, problems, and facts, and in line with Sections 19, Subsections a and b of the CBN Act 2007, the Management of the CBN sought and obtained the approval of President Muhammadu Buhari to redesign, produce, and circulate new series of banknotes at N100, N200, N500, and N1,000 levels.

Accordingly, all Deposit Money Banks currently holding the existing denominations of the currency may begin returning these notes back to the CBN effective immediately. The newly designed currency will be released to the banks in the order of First-come-First-serve basis.

Customers of banks are enjoined to begin paying into their bank accounts the existing currency to enable them withdraw the new banknotes once circulation begins in mid-December 2022. All banks are therefore expected to keep open, their currency processing centers from Monday to Saturday so as to accommodate all cash that will be returned by their customers.

For the purpose of this transition from existing to new notes, bank charges for cash deposits are hereby suspended with immediate effect. Therefore, DMBs are to note that no bank customer shall bear any charges for cash returned/paid into their accounts.

Members of the public are to please note that the present notes remain legal tender and should not be rejected as a means of exchange for purchase of goods and services.

We would like to use this opportunity to reassure the
general public that the CBN would continue to monitor both the financial system in particular, and the economy in general, and always act in good faith for the achievement or the Bank’s objectives and the betterment of the country.

I thank you for listening.

Buhari mourns with Suk-yeo over loss of 151 lives