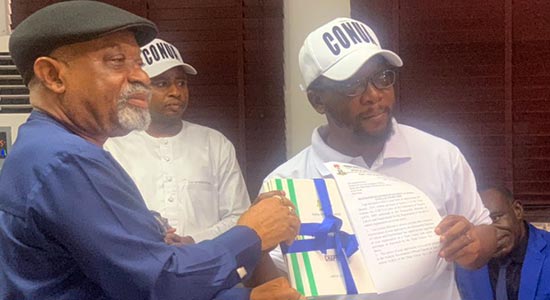 In an attempt to clip the wings of the Academic Staff Union of Universities (ASUU), the Federal Government on Tuesday approved the registration of Congress of Nigerian University Academics (CONUA), a breakaway faction of ASUU

The government also approved the registration of the Nigerian Association of Medical and Dental Academics (NAMDA) as a trade union.

Minister of Labour and Employment, Senator Chris Ngige announced this on Tuesday in Abuja.

He said the two unions would operate along with ASUU.

As at filing this report, presenting the certificate at a media briefing in Abuja.

However, it is uncertain what becomes the fate of ASUU, which reports have said would be deregistered by the government.

The Nigeria Labour Congress (NLC) is among the stakeholders who have warned against deregistering ASUU.

CONUA consists of break-away ASUU members, who appear to have obtained the government’s favour because of the ongoing ASUU strike.

ASUU grew from the defunct Nigerian Association of University Teachers (NAUT) in 1978.

Following the prolonged ASUU strike, CONUA has urged the Federal government to recognize it as an academic union, stressing it had met all requirements for registration and certification.

The government’s decision to recognize the body follows similar steps it took in the past to break the ranks of labour unions and professional bodies, or weaken them.

The Olusegun Obasanjo military regime banned the National Union of Nigerian Students (NUNS) in 1978 after protests across campuses over a hike in fees, after dismissing many lecturers and students.

No less than 20 students died, while scores of others were injured after the regime deployed troops to campuses to quell protests.

NUNS, formed in 1956, emerged from the West African Students Union (WASU), created in 1925. After the ban of NUNS, a new students union body, the National Association of Nigerian Students (NANS), was formed in 1980. NANS has not been free from government’s interference in its affairs, especially its elections, which had produced factional leaders on some occasions.

Similarly, the Nigerian Labour Congress (NLC) had had its share of the government ingenuity to tamper with existing order when it appeared offended.

The NLC was founded in 1978, but its birth was greeted with rejection by the country’s military regime.

Its national leadership was dissolved by the military juntas, first in 1988 under General Ibrahim Badamosi, and in 1994 during the era of General Sani Abacha.

In the early 2000s, former President, Olusegun Obasanjo, was also tough on the NLC because of the union’s opposition to some government policies that were considered obnoxious.

The Federal government ended up tampering with the union’s law in 2005, empowering other smaller unions that were hitherto subsumed under the NLC.

ASUU embarked on strike on February 14 over unmet demands by the Federal government.

The strike has since forced thousands of students in most public universities in the country to their homes.

All efforts by the government and major stakeholders to resolve the crisis have failed.

Peeved by ASUU’s decision not to shift its ground on the strike, the Federal government approached the National Industrial Court to compel the union to return to class.

The court ruled in favour of the government a fortnight ago and compelled the lecturers to return to work.

But ASUU appealed the ruling through its lawyer, Femi Falana, maintaining its position that the strike would continue until the government met its demands.

The demands are part of the 2009 agreement it had with the Federal government, which it said the government must implement.

Recall that ASUU had gone on strike for over 600 days under President Muhammadu Buhari, the longest under any leader in Nigeria.

Half legislators’ pay for ASUU demands & why pay civil servants for...