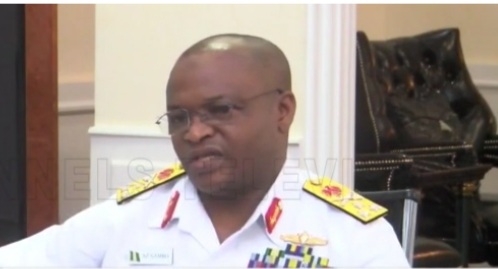 A recent interview granted by the Chief of Naval Staff, Vice Adrian Awwal Gambo; and comments by the Comptroller-General (CG) of the Nigerian Customs Service, Col. Hammed Ali (rtd) appear to have blown open the lid wide open on a massive fraud in the Nigerian oil sector.

On Sunday, the Chief of the Naval Staff, Vice Admiral Awwal Gambo, in an interview with Channels Television, debunked claims of daily crude oil theft quoted publicly by the NNPC.

“Most of these claims are definitely outrageous and unrealistic,” Gambo declared.

Ali on Thursday questioned the NNPC’s claims on the volume of PMS (known in local parlance as petrol) supplied and consumed on daily basis. He wondered why the NNPC permits the lifting of 98 million litres of petrol daily when it knew the actual consumption is only 60 million litres.

Accordingly, Ali insisted that the current subsidy regime projected to gulp over N6 trillion in 2023, is also a fraud.

He was  reacting to allegations of the high incidence of smuggling of petrol outside the country, while at the National Assembly to defend the NCS presentation on the 2023-2025 Medium Term Expenditure Framework (MTEF) and Fiscal Policy Paper (FSP), held by the Finance Committee, which was chaired by Hon. James Faleke.

Regarding the N11 trillion projected fiscal deficit in the 2023 budget proposal as captured in the 2023-2025 MTEF/FSP, an obviously angry Alli said: “I remember that last year we spoke about this, unfortunately, this year, we are talking about subsidy again.

“The over N11 trillion we are going to take as debt, more than half of it is going for subsidy. The issue is not about smuggling of petroleum products; I have always argued this with NNPC.

“That computation to me is not anything to be believed because scientifically, you cannot tell me that I filled my tank today and tomorrow, I will still fill my tank with the same quantity of fuel.

“And if I’m running a petrol station, for instance, today, if I go to the Minna Depot and lift a truck and I’m taking it to Kaduna; if I reach Kaduna in the evening and offload that truck that evening, there’s no way I could have sold off that petrol immediately to warrant another loading.

“So, how did we get to 60 million litres every day? These are my problems.

In his submission, Deputy Chairman of the Finance Committee, Sa’idu Abdullahi, noted that the amount being “expended” on fuel subsidy, which should have been invested in the provision of social infrastructure, are being diverted into private pockets.

Abdullahi said: “If there is anything that has constituted a nuisance on our resources today, it is subsidy. And without mincing words, as a government, we have not done well in doing the right thing. We are talking about N6 trillion going into subsidy payments which almost don’t exist.

“You talked about 38 million litres which amount to about 500 trucks leaving this shore on a daily basis. We have invested in NIGCOMSAT; do we have captured images of these trucks leaving our shores? Society will be kind to us if we are able to proffer a lasting solution to subsidy because it is not sustainable. Monies that should go into social services are being spent on subsidies which end in private pockets.”

Meanwhile, according to an unnamed commentator on social media, “The Chief of Naval staff revealed alot in his interview with Channels TV.

“How can massive ships load crude at designated points without the requisite documentation?

“When they are caught by the Navy,that is when their documentation is forwarded to the Navy for them to be released?

“The question is,what would have happened if they were not caught?

“He gave another example of a ship measuring 336m in length, 60metres in width which was also caught loading on official platforms without the requisite documentation.

“This brazen theft is being carried out by civil servants. The unpatriotic nature of an average Nigerian is mind boggling and a research will need to be carried out on it.

“This brings us to the question of why Tompolo was given such massive pipeline security contract worth four billion naira monthly to secure the nation’s pipeline?

“It is very clear from the interview granted by the Chief of Naval staff that the theft of crude oil is more an official theft than bunkering.

“This is the first time we are hearing first hand the truth about oil theft.

“This information is supposed to generate a massive uproar in every facet of the society but as usual, we are too concerned by ethno-religious bickerings……..and we want a better society.”