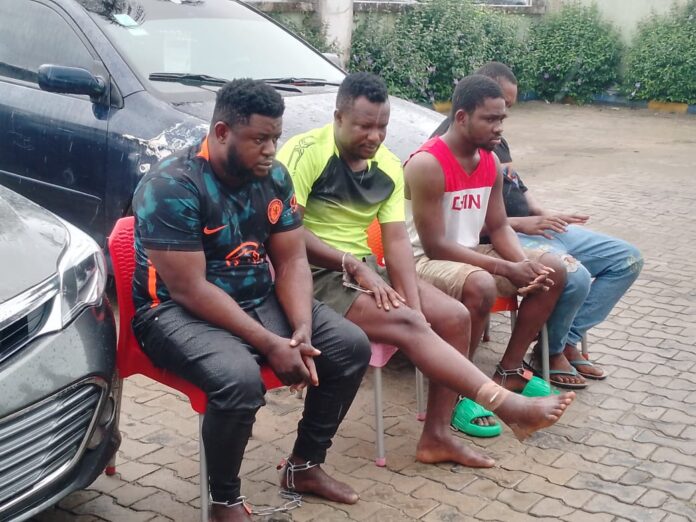 I warmly welcome you to this press briefing and parade of suspects to showcase our modest achievements in fighting crime in Bayelsa State.

In recent times the Command was confronted with reported cases of kidnaping, armed robbery and cultism. I re-jig the security strategy with a special focus on tackling kidnapping and armed robbery. The strategy has paid off with the recent arrest of members of a notorious kidnapping gang by operatives of Operation Restore Peace. This gang has been responsible for over ten (10) high profile kidnaping in the State over a period of seven (7) years.

On 8th December, 2020 one Akeeb Oladele Olushola ‘m’ 48 years a Manager of a new generation Bank was kidnap at his residence at Old Commissioners Quarters Opolo, he was released on the 12th December after paying a ransom of Eighty (N80) Million Naira.

1. Emmanuel Charles Angase ‘m’ 37 years, a native of Azuzuama Community, Southern Ijaw LGA, the leader of the kidnapping gang. He operates a kidnapping camp at Sunikiri creek near Oluasiri in Nembe Local Government Area with his second in command one Gbalipre Gamage now at large. Police operatives recovered a brand new Toyota Avalon he bought for his wife with the proceed of ransom he collected.

The gang leader Emmanuel Charles Angase has confessed that on 30th June 2022 at about 0600 hours, himself, John Ewa and others at large accosted Danjuma Omeje at the entrance of his house at Okaka, kidnap him and fled in a Blue Toyota Corolla Car with REG NO KJA 225 AY. They took the victim to his camp at Sunikiri Oluasiri, and release him on 14th July 2022 after collecting Sixty 60 million ransom. The suspect also confessed to the kidnap of Akeeb Oladele Olusola a banker and Nancy Keme Dickson, who was kidnap on 26th December 2015. He also confessed to the kidnap of Chinonso Eze and other Igbo Business men.

(Below is trending video of one of the alleged confessors)

2. John Ikechukwu Ewa ‘m’ 30 years aka John Lion, a native of Eruan Community in Boki LGA, Cross River State, known for flamboyant lifestyle on Social Media, a former cleaner with a new generation Bank, confessed to have collected Ten (10) Thousand US Dollars from the ransom collected in the kidnap of Danjuma Omeje.

On 3rd June 2022 at about 2000hrs, Operatives of Operation Restore Peace responded to a distress call that there was a cult clash between Greenlanders and Bobos Cult groups at Obele Street, Yenagoa. On arrival at the scene, the Police team met some suspects attacking one Kenus Ibomo on sighting the Police team, the suspects ranaway, they were pursued to their hideout at Arietelin and the following suspects were arrested one Richard Derigha ‘m’ 36 years, Charles Francis ‘m’ 25 years, Collins Ugochukwu ‘m’ 28 years, Timipa Perewari ‘m’ 22 years and Clement Demepo ‘m’ 23 years. They all confessed to the killing of the victim and membership of Bobos Cult Group. A locally made pistol, Black Beret and other cult insignia were recovered from the suspects.

On 17th April 2022 at about 1945 hours, one Gift Lucky Sotonye 24th years and one other now at large, robbed one Ogechi Rosemary ‘f’ and Gift Ogunleye ‘f’ at Azikoro Village. Discreet investigation led to the arrest of the suspect. Three itel phones, a locally made double Barrel gun and locally made single Barrel gun and two (2) Live Cartridges were recovered from the suspects.

On 19th July at about 0800hrs Policemen arrested one Godgift Emmanuel ‘m’ 22 years at Otuasega Community Ogbia LGA for unlawful possession of a locally made pistol. The suspect confessed to membership of Bobos cult group.

On 18th September 2022 at above 1545 hours, Operatives of Nigeria Security and Civil Defence Corps attach to Labrador Security outfit arrested three (3) suspectes Pipeline Vandals namely; Jonah Geoffrey ‘m’ 37 years, a native of Okoroma, Clement Suoyo ‘m’ 30 years, a native of Fantuo and Destiny Clement, a native of Fantuo all in Nembe Local Government Area. The suspects were handed over to the Police for further investigation. Items recovered from the suspects includes three (3) new Walkie-Talkie for easy communication, two (2) rolls of Big Hose, one (1) well head. Investigation is ongoing.

All the suspects will be charge to court at the conclusion of the investigation.

The Bayelsa State Police Command under my watch has firmly resolved to make the State uncomfortable for criminals. Our Officers are determined more than ever to rid the State of criminals’ elements and to ensure our communities are safer for businesses and economic activities to thrive.

▪︎ Video of one of the alleged confessors from social media

Again, FG fails in court to extradite alleged fraudster, Andrew Ibe, to the US