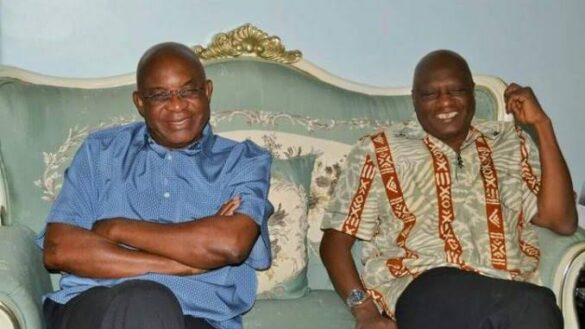 A former President of the Senate, Senator David Mark has described his compatriot, Senator Jonathan Tunde Ogbeha as a worthy soul mate of inestimable value .

Senator Mark in a goodwill message to Senator Ogbeha on his 75th birthday (September 1, 2022) stated “ Senator Ogbeha is my brother like no other. He is my friend and faithful to me . We have come a long way through thick and thin . I am happy our paths crossed early in life”.

He praised Senator Ogbeha for his steadfastness, commitment and loyalty to the union for over three decades.

Senator Mark prayed that God continues to bless Ogbeha with good health, peace , wisdom and courage in years to come .

Senator Mark and Ogbeha were classmates at the Nigeria Military School (NMS), Zaria, in the early 60s , Course mates at the Nigerian Defence Academy ( NDA) and were both military governors during the General Ibrahim Babangida’ regime.

Mark was military Governor of Niger state while Ogbeha was the pioneer military governor of Akwa Ibom state and later Bendel State. Both retired as Brigadier Generals from the Nigerian Army .

Ayu pushes back, describes opponents as children who were not there when PDP was founded