▪︎ My visit to Atiku misconstrued, as Nwobodo, Turaki, Ugochukwu, others visit 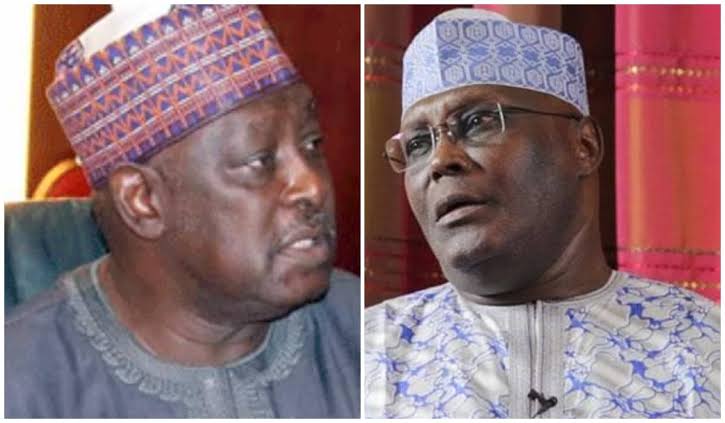 A former Secretary to the Government of the Federation, (SGF), Dr Babachir Lawal has distanced himself from joining the opposition party, the Peoples Democratic Party (PDP) to settle scores with the ruling All Progressives Congress (APC) over the controversial Muslim-Muslim Presidency in 2023.

He said he would rather quit active politics on May 29, 2023, when President Muhammadu Buhari would have completed his second term in office.

Babachir Lawal in a statement made available to our correspondent in Abuja on Wednesday said he would go back to his farm and remain an elder statesman next year.

In the statement, the former SGF clarified that his visit to former Vice President and currently Presidential candidate of the PDP, Atiku Abubakar to condole him on the death of his Personal Assistant was misconstrued as defection to the opposition party.

The Asokoro, Abuja residence of former Vice President Atiku Abubakar has been streaming with high profile visitors within the last 48 hours. Atiku left Nigeria for the United Arab Emirates, (UAE), after meetings with the organised private sector and the top echelon of the Nigerian media in Lagos penultimate week, in furtherance of his presidential campaign. The flagbearer of the major opposition party, the Peoples’ Democratic Party, (PDP) cut short his trip and returned on Saturday September 24, 2022. This followed the unfortunate demise of his most trusted, longserving aide, Abdullahi Nyako, in the early hours of Thursday September 22, in Dubai.

Delegations and individual mourners across the spectrum of the nation’s politics and economy, have been paying condolence visits to Atiku, the chief mourner in many respects. Second Republic Governor of old Anambra State, Jim Nwobodo led a delegation of South-East leaders to Atiku’s residence evening Sunday September 25, 2022. Third Republic Governor of Enugu State, John Nwodo and former Deputy Speaker, House of Representatives, who was also governor of Imo State, Emeka Ihedioha, were on the visit. Similarly, one-time presidential running mate to Atiku, Ben Obi and former governor of Abia, Theodore Ahamaefule Orji, were on the team.

Former Minister of Special Duties in the administration of former President Goodluck Jonathan, Saminu Turaki, SAN, led representatives of the Federal Executive Council of that era, on a visit to Atiku, earlier Monday. Former Minister for Women Affairs, Inna Ciroma, and her colleagues in Sports, Ibrahim Isa-Bio, as well as the Ministry of Federal Capital Territory, (FCT), Jumoke Akinjide-Balogun, were in the group. Celestine Omehia, who served briefly as governor of Rivers State, led a delegation of leaders from the state to the residence of the erstwhile Vice President. Former Chairman of the PDP, Uche Secondus; former Deputy Speaker, House of Representatives, Austin Opara and Senator representing Rivers East, George Thompson Sekibo, were present. Similarly, former Senator Lee Maeba; former Transport Minister, Abiye Precious Sekibo, and House of Representatives Member, Chinyere Igwe, were on the visit.

Abdullahi Nyako, who had been on the personal staff of Atiku Abubakar for the last two and half decades, died in his sleep in the before dawn on Thursday September 22, 2022. Olusunle, his friend and colleague from the Olusegun Obasanjo presidency, had exchanged chats with him late into the evening the previous night and was thoroughly astounded when news of his exit filtered in. A very well educated and experienced bureaucrat, he was deployed from the federal civil service to work with Atiku following his assumption of office May 29, 1999. He was designated “Principal Secretary” to the Vice President, a job he executed with every commitment and distinction. His relationship with Atiku had deepened at the expiration of Obasanjo/Atiku government in 2007, so much that Atiku retained his services thereafter.

Nyako who obtained a 1981 degree from the Ahmadu Bello University, (ABU), Zaria and a 1990 masters in public administration from the University of Jos, (Unijos), was called to the bar in 2007, after earning a degree in law from the University of Abuja, (UniAbuja). He joined the federal civil service in 1982 and served in various sensitive positions, including the Political Affairs Department in the Office of the President, between 1982 and 1987. He also served as Administrative Assistant on Special Duties, Office of the First Lady, (Maryam Babangida), from 1991 to 1993. He was also Executive Director, Local Organising Committee, (LOC), of the FIFA World Cup, the World Youth Championship, tagged *Nigeria ’95,* from December 1993 to December 1994. He was born in Kojoli, Jada local government area, (LGA), Adamawa State. He would have been 64 on November 11, 2022.

Babachir Lawal’s statement reads in part “It has just been brought to my notice that I have defected to the PDP. This is not true. This is fake news.

“Just like other politicians including some in the APC, I visited VP Atiku yesterday to condole him over the death of his PA and I noticed some people took my pictures. I suspect this fake news must have originated from this episode.

“Despite our being in separate political parties, Atiku and I are like brothers and I am always warmly received in his home.

“I am still a member of the APC and have no plans to leave it for any other party. In fact, I am considering leaving party politics altogether so as to remain an elder statesman.

“I had joined politics just because of President Muhammadu Buhari and will therefore have no further motivation to remain so after 29th May, 2023.

“I find the pleasure and comfort of my farms more attractive and rewarding”, the statement said.