Ogun Speaker gets N300m bail as EFCC arraigns him, two others for alleged N2.4billion fraud 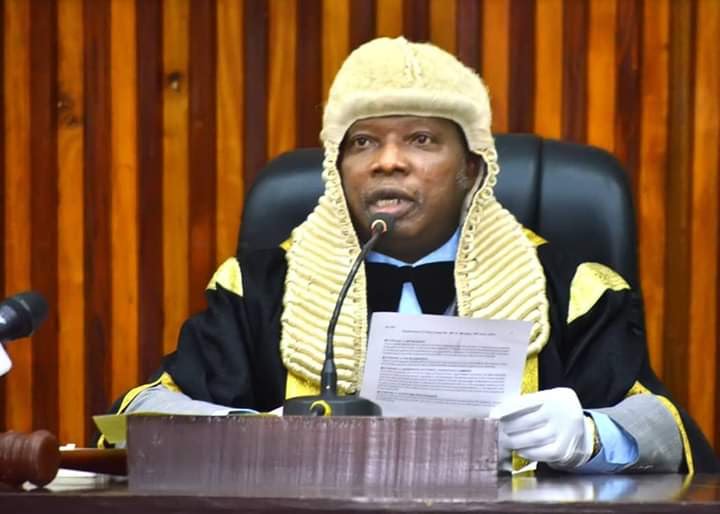 The  Economic and Financial Crimes Commission, EFCC, has arraigned the Speaker of the Ogun State House of Assembly, Oluomo Olakunle Taiwo, before Justice D.E. Osiagor of the Federal High Court sitting in Ikoyi, Lagos for an alleged N2.4billion fraud.

One of the counts reads: “ That you, Oluomo Olakunle Taiwo, Oladayo Samuel, Adeyemo Adedeji Taiwo and Adeyanju Nimota Amoke (now at large), sometime in 2019 in Abeokuta, within the jurisdiction of this honourable Court, conspired amongst yourselves to USE the total sum of N2,475,000,000,000.00 (Two Billion, Four Hundred and Seventy Five Million Naira), which sum you reasonably ought to have known forms part of the proceeds of your unlawful activity to wit: stealing from the treasury of Ogun State House of Assembly and you thereby committed an offence contrary to Sections 18 (a), 15 (2) (d) of the Money Laundering Prohibition Act, 2011 as amended and punishable under Section 15 (3) of the same Act.”

The defendants pleaded “not guilty” to the charges preferred against them.

In view of their pleas, counsel to the first defendant, Kehinde Ogunwumiju, SAN informed the court that he was in  the process of filing a bail application for his client at the  Registry.  He, however, pleaded to make an oral  application for bail.

Ogunwumiju observed that the defendant had been granted an administrative bail by the prosecution, and that “he did not default.”

He also told the court that the defendant, a public servant, “is contesting for the seat of the House of Assembly in the 2023 General Elections.”

He assured the court of his client’s attendance throughout the course of the trial.

Ogunwumiju also prayed that the defendant be remanded in the EFCC custody pending the perfection of his bail conditions.

Akinyemi Aremu and Oluwole Aladedoye, counsel to the second and third defendants, in their applications dated September 5, 2022 , aligned with the submissions of Ogunwumiju and pleaded with the court to grant their clients bail in “the most liberal terms.”

Aladedoye admitted that while bail was at the discretion of the court, the offences against the defendants were bailable and “ such bail, as the law permits, should be in the most liberal and affordable terms. “

In a response, EFCC’s counsel,  Rotimi Oyedepo said: “I have been served the advance copy of the bail applications. And in view of the serious undertakings that the defendants will be present in court, I will hand over the decision to the court.

“However, I urge your lordship to make such conditions and terms that will ensure their attendance in the course of trial.”

Justice Osiagor, in a short ruling, admitted Oluomo to bail in the sum of N300m( Three Hundred Million Naira)and two sureties in like sum.

The  second and third defendants were each granted bail in the sum of N100m (One Hundred Million Naira), with two sureties.

The sureties should be public servants on Grade Level 14 and should possess landed property within the jurisdiction of the court.

They must also provide a three- year tax clearance.

The Judge also ordered the defendants to deposit their International  Passports with the court.

Justice Osiagor further ruled that the defendants, pending the perfection of their bail, “are to remain in the EFCC custody for a week.”