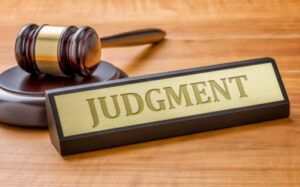 The Judge held that the PDP’S suit lacked merit and was aimed at irritating opponents in the 2023 Presidential election.

Justice Okorowo specifically held that the suit filed by a Senior Advocate of Nigeria (SAN), Gordy Uche, on behalf of PDP was incompetent and unjusticiable as it disclosed no reasonable cause of action.

Besides, the Judge said that PDP failed woefully to disclose any injury it suffered in the substitution of running mates carried out by APC and Labour Party.

The running mates whose substitution were  challenged by PDP are Kabiru Masari and Doyin Okupe for APC and Labour Party respectively.

In the suit, PDP claimed that the Electoral Act 2022 did not make provision for a “place holder” or temporary running mate and that time for resignation, withdrawal or substitution of presidential candidates or conduct of fresh primaries to replace them is not applicable to Masari and Okupe.

PDP also contended that Bola Ahmed Tinubu,  Peter Obi, can only qualify to contest the 2023 presidential election with Masari and Okupe, as their respective running mates.

The plaintiff further claimed that the Independent National Electoral Commission, INEC, lacked power to accept any withdrawal or substitution of Masari and Okupe without APC and Labour Party conducting fresh primaries to substitute Tinubu and Peter Obi.

PDP averred that Masari and Okupe are not products of any primary election and as such were not validly nominated by APC and Labour Party.

PDP also stated that INEC cannot validly make any other election time-table for the change and substitution of Masari and Okupe as running mates to Tinubu and Peter Obi and that the candidacy of Tinubu and Obi are tied to Masari and Okupe and cannot be severed, altered or changed any day later than June 17, 2022.

The Judge however held that the issue of nomination and substitution are internal affairs of political  parties and that courts have no jurisdiction to dabble into them.