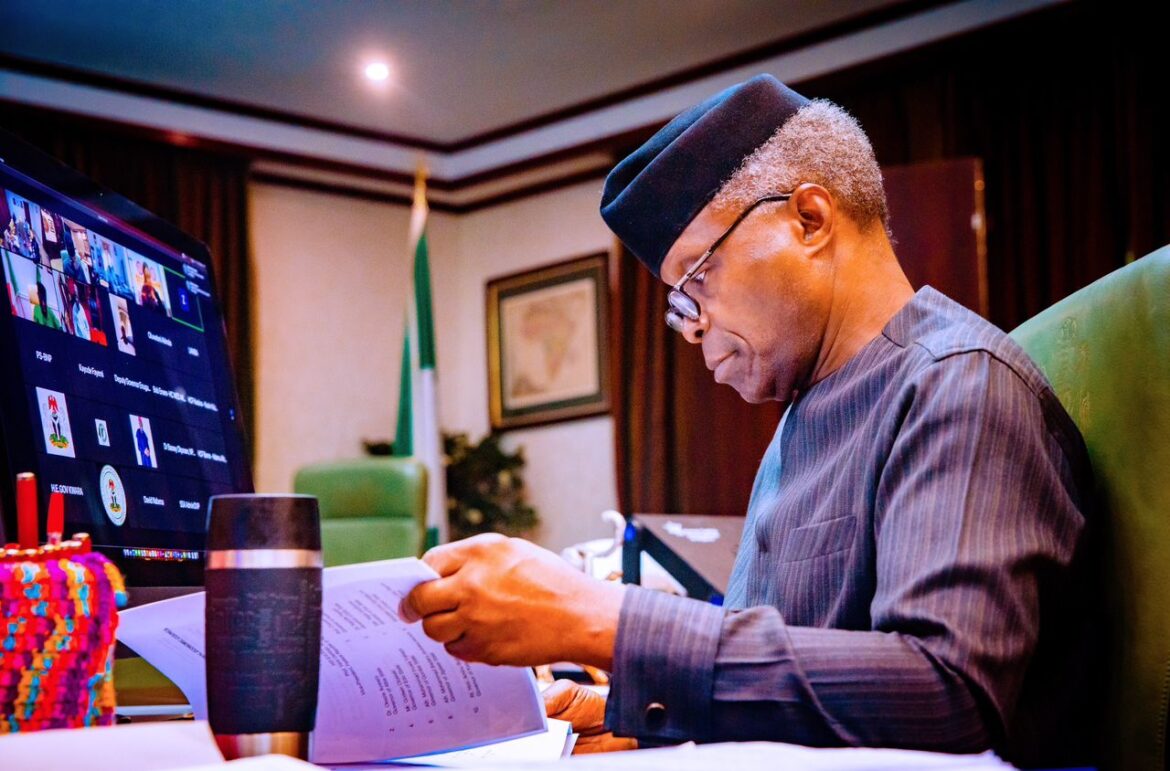 In its meeting today, the National Economic Council (NEC) received briefings on the need for States to adopt strategies to step up service delivery in the grassroots and also on how to mitigate flood disasters this season.

These were some of the highlights of the Council’s meeting presided over by Vice President Yemi Osinbajo, SAN.

Also, at the meeting, outgoing Governor Kayode Fayemi of Ekiti State and Chairman of the Nigeria Governors’ Forum (NGF), lauded the Vice President, stating that with the VP as NEC Chairman, the Council has done a lot to ensure that the country is a true federation, while expressing his appreciation to the Council, the VP and the President.

It was the 127th NEC meeting, and it held virtually with State Governors, some Deputy Governors and key federal ministers in attendance.

According to Dr. Fayemi, having served in previous NEC and longer than most current members, he can affirm that the VP’s leadership has been outstanding, adding that the Council has never had the kind of leadership that Prof. Osinbajo has provided. He hoped that such leadership of NEC would be maintained going forward.

Addressing the VP, Governor Fayemi said, “I want to particularly express my own gratitude to you for your leadership over the last four (4) years that has reenergised this Economic Council in a manner that we have not seen in a long time. In fact, I should say over the last seven (7) years, but I have been privileged to be part of it in the last 4 years.

“And I have been part of all the National Economic Council’s proceedings before your time, but I can say without any shadow of a doubt that the energy, the focus, the results over the last 4 years are due to no other reason than your extraordinary leadership of this Council.”
In his remarks, the Vice President commended the outgoing Ekiti State Governor, who was attending his last NEC meeting today.

Below are details and other highlights of today’s NEC meeting:

• That the Global caseload is stable

• No death in past week

• 6 States returned no testing at all

• Trends show that COVID-19 cases have increased by 3% across the States & FCT.

• It noted that the COVID-19 pandemic is not over

The NCDC therefore urged the States:

1. To commit more testing, including routine testing and frequent testing for health workers

2. It urged that Private health institutions be encouraged to do more testing.

1. Nigeria reached 43% of Vaccination target with Vaccination of 49 million. Agency set to achieve 70% by December 2022.

2. Some States come tops in the Vaccination drive: they are Nasarawa, Jigawa, Kwara, Osun, and Kaduna.

1. To convene LGA meetings, including officials, traditional and religious leaders to mobilize for Vaccination

2. To make Vaccination an agenda at State Exco meeting to review progress on targets

Council noted that the NSIA (Establishment) Act, 2011 provides that all appointments of individuals into the Board of Directors “shall be made by the President on the recommendations of the Minister of Finance, who shall consult with the National Economic Council (NEC).”

Council was also called to note that following the notification of the expiration of the tenures of the Managing Director/Chief Executive Directors, the Honorable Minister constituted the Executive Nomination Committee (ENC) to fill the vacant positions;

Council then noted that the outgoing Managing Director/Chief Executive officer will expire on the 30th September, 2022.

Finance Minister presented the outcome of the search to fill the positions of NSIA MD/CEO and 2 Executive Directors which are becoming vacant with the expiration of the terms of the current holders.

The names of the nominees were presented, and NEC gave its endorsement to the President for his approval.

It is an initiative of the Federal Government of Nigeria conceived to promote effective and efficient service delivery in Ministries, Departments and agencies (MDAs) to ensure customer satisfaction and to manage the performance-expectations gap between Government and citizens, as well as other members of the public on issues of service delivery.

The overriding aim of this program is to ensure improved service delivery to the citizens by making service delivery process and systems much more open, accountable, citizen centered, transparent at the grassroots by pitting systems and mechanisms in place that would provide quality service to the people.

A commitment to improving service delivery for citizens, with support at the highest levels of state government.

Establishment of a SERVICOM office to operationalise these commitments; co-ordinate their implementation; monitor and report of progress; survey customer satisfaction; and support the implementation of service charters.

That States collectively drive improved service delivery at the grassroots level for a better Nigeria.

· Identification of equipment and personnel

· Equip NEMA, SEMA and other response agencies with necessary resources for the emergency response to communities and persons affected by flood

The Vice President, on behalf of the NEC, praised Governor Fayemi especially in his role as Chair of the NGF and noted his “informed and patriotic contributions” to the work of the NEC.

The VP also commended the Permanent Secretary of the Federal Ministry of Budget and Planning who serves as Council Secretary, Mrs. Olusola Idowu as she retires from public service. According to the Vice President “we like to commend her leadership and great contribution to make the Council work orderly and well-resourced over the years.”

He also prayed for her, that she would continue to render great service both nationally and globally.

Earlier Governor Fayemi had commended the VP for ensuring as NEC Chair that the Council has done a lot to ensure we are a true a federation and expressed his appreciation to the Council, the VP and the President.

Also, the Deputy Governor of Akwa Ibom, Mr. Moses Frank Ekpo, also commended the VP’s leadership of the Council and paid tributes also to the outgoing NGF Chairman for leading the Forum so ably. He also thanked the outgoing Council Secretary for a job well done.

The Vice President agreed with him that, indeed, the NEC & NGF are ensuring that the country moves as a nation even more towards a true federation, not just in words but in action.

He then prayed for Dr. Fayemi that he would continue globally and nationally to rise in every way.