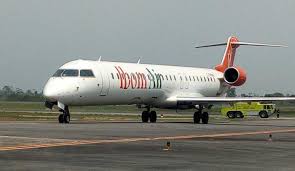 Ibom Air has explained why it disembarked passengers of the troubled Saturday flight from Abuja to Lagos at the cargo apron of the Murtala Mohammed International Airport after the plane got stuck on the tarmac over wheel problems.

But the explanation has drawn the ire of an insider who gave a different account of what happened.

The statement by its spokesman, Aniekan Essienette, the General Man, Marketing and Communication reads, “We would like to bring to your attention the reason behind the disembarkation of our passengers at the Cargo Apron of the Murtala Muhammed International Airport Lagos.

“Ibom Air flight QI 0307, the 10.30 am flight from Abuja to Lagos departed on time and landed normally at the international runway in Lagos, on schedule at 11.41 am. Upon taxiing off the runway, the pilots noticed an indication from the main wheels, suggesting a malfunction.

“In accordance with company procedure, rather than taxi the full distance to the domestic terminal, the crew opted to turn off into the international cargo apron from where stairs and buses were positioned to disembark the passengers and take them to the domestic arrival hall.

“All 128 passengers on board were safely disembarked and transported to the arrival hall at MMA2, while our Engineers work on the fault. This statement is given to clear any ambiguity while expressing our regrets to our passengers for the inconvenience.”

However,  an angry insider said, “See how they put it, that they didn’t want to continue to run to the terminal, instead of saying that the aircraft was grounded and could not move again.”

He had earlier disclosed on Saturday that the plane lost a tyre in the course of landing, and crash landed which affected the brakes of the aircraft.

Everyday.ng recalls the unfortunate experience of the passengers on Saturday when the aircraft got stuck on the tarmac.