It was during a thanksgiving mass for justice Emmanuel Agim Akomaye, recently promoted to the rank of judge of the Supreme Court of Nigeria, held at the St. Patrick’s Catholic, Ikot Ansa, Calabar.

When the governor said he would whisper a gift to the Bishop of the Catholic Doicese of Uyo, John Uyah, an indigene of Northern Cross River, like him, Ayade got more than he bargained for.

The Bishop politely turned down his offer of a gift, but advised him to put it together to pay the salaries of Cross River Government workers.

“I want to talk. The governor is my brother, we are both from Cross River North. I want to appreciate the governor and tell him to package whatever he has for me, add to it and use it to pay the salaries of the workers,” Bishop Ayah said.

A louder applause and comments of affirmation followed. 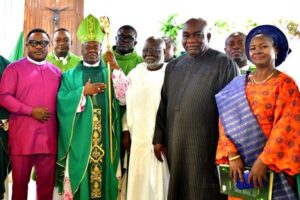 Accordingto Vanguard newspaper report, not captured in attached video above),  Ayade immediately went back to the “podium” to defend himself .

He explained that the salaries of the workers were ready adding that his administration has been faithful, and consistent in the payment of salaries for well over seven years.

He said “The people will appreciate Ben Ayade when he leaves office”,

He noted that while the hope of the people was raised when the governor started projects, especially the industrial projects, the hope had been dashed.

His words : “Cross Riverians were hopeful for the long expected economic transformation of the state, when the government started these projects.

“We have now noticed that the administration has hung our hearts up in expectation.”

He commended the state government for the improved security situation across the state, but appealed for improved road network.

“Our road network in the state is far from what we hoped for, many of the rural and urban roads have broken down.

“This has contributed to the high cost of conveying farm produce from rural to urban centers.

“However,  we wish to commend the government on the slight improvement in the security within the state over the last year but  the government should  not to rest on its oars as it is not yet “uhuru,” he said.

His spokesman, Mr. Christian Ita, had then offered an explanation, saying that while some of the projects had been completed, others have attained various stages of completion.

He advised anybody who was in doubt to undertake a tour of these projects rather than draw conclusion from the “comfort of their homes.”

“The government has not ended, it still has 10 to 11 months to run and work has not stopped in any of the projects initiated by this administration,” he added.

Last March, some persons claiming to be civil servants, Monday, protested before the office of the Head of Service (HOS) of Cross River State over alleged unpaid four years salaries by the state government.

The protesters carried placards in Calabar with inscriptions such as “over four years without salary,” “who did we offend?” “We go to work every day.”

Other placards carried by the protesters who sang solidarity songs bore the inscriptions: “the injustice is too much,” “a labourer deserves his wages.”

The Coordinator of the protest, David Iyaya, said the aggrieved “civil servants” were from various Ministries, Departments and Agencies (MDAs).

Mr Iyaya claimed they were employed by the state in 2018, but had not received a dime since their employment.

According to him, they were on a peaceful protest to the office of the HOS to let him and others know that they were suffering.

He called for the sack of John Odey, the special adviser to Governor Ben Ayade on Payroll Matters, whom he blamed for “not fighting for the good of workers” in the state.

“We are here to vent our anger. A Memorandum of Understanding (MOU) was signed, but instead of sticking to it, the government is calling for new recruitment.

“We want John Odey to be sacked. He is the SA on payroll and we expected him to mediate between us and the government as a former labour person, but the reverse is the case.

“We are so disappointed in him. We have lost four of our members; one just died last week at the teaching hospital,” Mr Iyaya said.

Reacting to the protest, the HOS, Ogbang Akwaji, said the protesters were not workers as they claimed.

“These are not my workers but they say they have appointment letters even though I have not sighted them.

“There is nothing new about these calibre of persons. They are flaunting appointment letters but the governor clearly stated that he did not give authorisation for their employment.

“So if you have an appointment letter into the service and the governor said he did not authorise it then what you are holding amounts to nothing.

“The governor addressed them at the stadium and labour listed their matter as one of the items in the memorandum of understanding and we are on it.

“This protest is unnecessary but we will engage them at the appropriate time,” the HOS said.