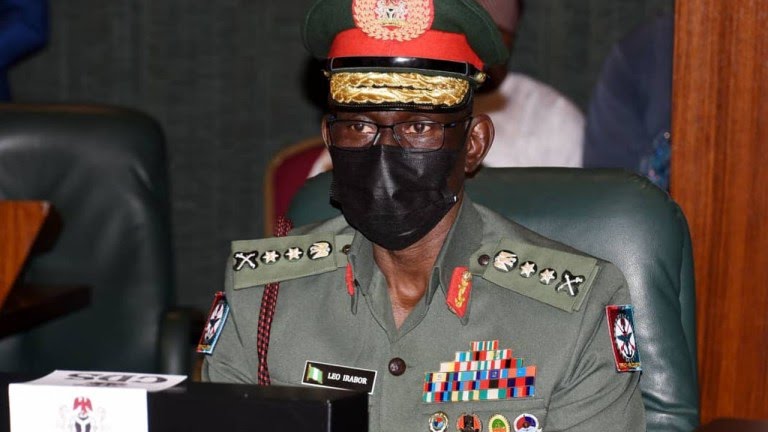 An additional two suspects have been picked up by security forces in connection with the killing of 40 worshippers at the Catholic Church in Owo, Ondo State.

Hours after the Chief of Defence Staff (CDS), General Lucky Irabor, announced the arrest of four of the Owo Catholic Church attackers, the two were apprehended at Omialafara (Omulafa), Ose LGA, Ondo State.

Director of Defence Information (DDI), Major-General Jimmy Akpor said in a statement, “The arrests were made through the collaborative effort by military and DSS personnel. The suspects are Al-Qasim Idris and Abdulhaleem Idris.

“It is instructive to note that Abdulhaleem, alongside other high profile ISWAP commanders, had also previously coordinated attacks on military targets in Okene, Okene LGA, Kogi State resulting in casualties.”

“It is the avowed commitment of the leadership of the military, Nigeria Police, DSS and other security agencies to work in synergy to enthrone peace and security all over the country.

“This is due to the need for collaboration as an essential requirement to successfully deal with the existential asymmetric threats currently bedeviling our dear nation, Nigeria”.

Meanwhile more details have emerged on the release of seven captives of Abuja-Kaduna train. They included six family members of the former military governor released after the Abuja-Kaduna train abduction were Abubakar Idris Garba, who is the father of the four kids, his wife Maryama Abubakar Bobbo and their eldest son, Ibrahim Abubakar Garba who is 10 years old. 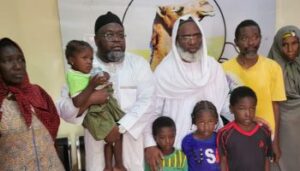 The children released were Fatima Abubakar Garba 7 years, Imran Abubakar Garba 5 years old and youngest Zainab Abubakar Garba who is only one and half years. It was still not clear on Wednesday if any ransom was paid for their release.

According to Tukur Mamu, the Publisher of Desert Herald and media consultant to Kaduna-based cleric, Sheik Gumi, the cleric played a role in their release.

In a statement, he said: “Disturbed by the gory videos images of four teenage children belonging to same family he saw in the last video released by the attackers of the AK9 Train, Sheikh Dr. Ahmad Gumi for the first since the abduction of the innocent passengers of that train over 4 months ago has reached out to the abductors through his Media Consultant, sent Allah’s messages to them and consistently pleaded with them to consider the release of the poor children and their innocent parents. It was learnt that the health condition of two of the teenage children has deteriorated since the flogging incident that affected their helpless father. A total of additional 7 hostages were therefore released on Wednesday.”

“The husband of the four kids is a staff of the National Assembly Commission. There was no intervention from the Commission or NASS on his behalf since the travails begun.

“This is to confirm to the world that due to Sheikh Gumi’s efforts and with the support of a serving Senator from the North, (a God fearing personality that doesn’t have any relationship with the hostages) who chose to remain anonymous that all the family of six have regained their freedom on Wednesday morning. Also released is a 60 year old woman, one Hajia Aisha Hassan who was said to have been released due to life threatening health challenges that deteriorated recently.”

Channels Television first reported the release of the seven.

On March 28, 2022, an Kaduna-bound passenger train was attacked by terrorists. Eight persons were killed while 61 were heralded into the forests. There are still about 27 in captivity after others paid for their freedom, with many paying up to N100 million per head, according to some reports.

Recall that the nation’s Defence Chief, General Lucky Irabor, told journalists on Tuesday that although some victims of the Abuja-Kaduna train attack had been released, the military and other security agencies remained committed to ensuring safe rescue of the remaining victims in captivity.

He said the military had intensified both air and ground operations to deal with criminals in all parts of the country, adding that several successes had been recorded in recent times.

Irabo disclosed that based on military air operations, the military on Aug. 6, killed one Alhaji Abdulkareen, a bandits’ leader along with his fighters in Nigeria’s North West.

“By the deeds of the surgical air operations that we have conducted, many of the bandits’ leaders have been killed,” he added.

Gov. Rotimi Akeredolu of Ondo State on Tuesday confirmed the arrest of five suspected killers of over 40 worshippers at St. Francis Catholic Church, Owo on June 5.

Akeredolu said this during a courtesy visit to his office by the leadership of the Nigeria Union of Journalists (NUJ), Ondo State Council, led by the Chairman, Prince Leke Adegbite.

The News Agency of Nigeria (NAN) reports that Akeredolu confirmed the arrest shortly after the Chief of Defence Staff (CDS), Gen. Lucky Irabor, announced the arrest of the masterminds of the attack in Abuja.

He noted that government did not spare a moment in trailing the terrorists since the horrendous attack on innocent worshippers.

”Now that the military has announced it, I can tell you that five of them have been arrested now. They are still on the trail of the rest.

“The home where they lodged in Owo and the person that accommodated them before the attack, has also been arrested.

“We did not spare a moment. I am happy that the Chief of Defence Staff has announced it. We have known for a while but we needed not to come out with it because more works are still ongoing.

“I can confirm that this arrest has been made and they are still on the trail of some of them,” he said.

The Chief of Defence Staff (CDS), Gen. Lucky Irabor has said one of the high-profile Islamic State in West Africa Province (ISWAP) members that escaped from Kuje Prison has been arrested in Ondo state.

Irabor disclosed this while speaking at a parley with media executives at the Defence Headquarters in Abuja on Tuesday.

He also disclosed that the masterminds of the June 5 massacre in Owo, Ondo State have been captured by security operatives.

According to him, they were captured at different locations across the country.

NewsWireNGR recalls that no fewer than 40 worshippers were massacred at the St. Francis Catholic Church in Owo, in an incident that jolted Nigeria and the global community.

He said that the suspects, the majority of whom were arrested in various communities in Kogi, would be paraded before the public in due course.

“We had wanted to present the suspects to the public immediately but couldn’t because certain investigations are still being carried out,” he said.

He gave his assurance that in due course, the suspects and others who had been involved in some daring attacks in the past few months would be presented to the public.

“Starting with the Owo church attack, it is my pleasure to let you know that we have arrested those behind that dastardly act.

“On Aug. 7, one Idris Ojo (37) was apprehended at Aiyetorosi in Ondo State. He was one of the high-profile Islamic State in West Africa Province (ISWAP) members that escaped from Kuje Prison.

“He was arrested along with one Jimoh Ibrahim, a 39-year-old criminal.

“Ojo was not done with all the criminal activities which he undertook in the past, he was also planning other deadly attacks and he was perfecting those plans along with his cronies before he was captured,” he said.

“Again, on Aug. 4,  the military in a combined operation with the Department of State Service (DSS) arrested four terrorists at Eika in Okehi Local Government Area of Kogi State.

“Now, Omeiza is one of the masterminds of the June 5 Catholic Church attack in Owo as well as the attack on the police station in Adavi also in Kogi State that led to the killing of a policeman as well as weapons being carried away,” the CDS said.

The CDS said the essence of the parley with journalists was to solicit understanding and support from the media in the fight against the security challenges bedeviling the nation.

He, however, called for greater cooperation between the military and the media with a view to finding solution to the security challenges and disallow enemies from stoking fears in the minds of the public.

The defence chief also urged Nigerians and political leaders to understand the distinction between military operations and politics, adding that the military remained undaunted in ensuring a safe and secured nation.

Earlier, the Director, Defence Information, Maj.-Gen. Jimmy Akpor, said the essence of the parley was to build a sustainable trust between the media and members of the armed forces.

Akpor said the meeting was in line with the leadership focus of Irabor toward fostering professional armed forces capable of meeting constitutional imperatives.

The Chief Executive Officer of The Media Today, Mr Charles Odenigbo, said the military and media must be frank and open to each other in ensuring peace and security in the country.

Odenigbo, the facilitator of the event, said that although military operations could not be discussed in the open, there was need to see how the media could fit into the activities of the military.

Governor Akeredolu has also called on leaders of the Ebira community in the state to warn the young ones against the bad venture of kidnapping.

The governor said recent reports from kidnap victims in the state have established that some Ebira indigenes are now involved in the unwholesome act.

He noted that the Ebiras have lived together with the people of the state peacefully for several decades, adding that they have always been supportive and hardworking.

“I want to use this medium to urge our brothers to concentrate on their farming trade. It will be unfortunate to know that the Ebiras in our midst are now involved in kidnapping.

“We are appealing to them not to copy bad thing. The traders selling by the road side should not become informants.

“We are not fighting them; we have seen their numbers, they supported and voted for us during elections. I will call their leaders and talk to them.

“Our brothers who were kidnapped on their way to Ikare; talk to them, they were taken to Ebira farmsteads.

“For me, we have lived together for too long for this to happen. I am ready to make any effort to ensure that the conviviality that we have enjoyed continues.

“But we are begging their leaders to urge them not to copy bad thing. They are in our midst, we are surrounded by them. The issue of security is key and it’s dynamic,” he said.

Akeredolu disclosed that aside the recent recruitment and training of new Amotekun personnel, 20 hunters and local vigilantees would be trained by the Amotekun corps in each of the 18 local government areas of the state.

The governor, who thanked the NUJ in the state for the cooperation extended to his administration, assured them of sustained efforts at developing the state.

Earlier, the Chairman of the NUJ, Ondo State Council thanked the governor for his support for the management of Ondo State Radiovision Corporation and Owena Press PLC, adding that the upgrade of facilities in the two state-owned media outfits was commendable.

He equally appreciated the governor for the approval of the Weigh-in allowance for journalists and information officers working in the State and Local government service.