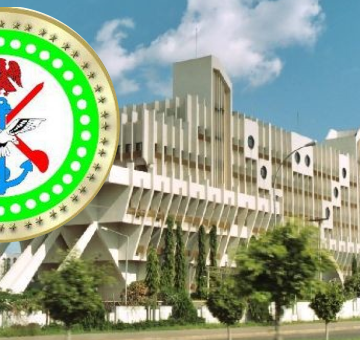 The Armed Forces of Nigeria and other security agencies form the various operational theatres in the 6 geopolitical zones of the country. The highlights of today’s briefing will cover the period from 28 July – 11 August 2022.

3. Troops in conjunction with Civilian Joint Task Force also arrested Hussain Dungus, Ali Bulama Jidda and Mallam Ali Abuna terrorist logistics suppliers on 6 August 2022 at Buni Yadi general area. Items recovered from the suspects include the sum of One Million Seven Hundred and Ninety-Three Thousand Seven Hundred naira (1,793,700.00) only, large quantity of assorted food stuffs, 3 handsets, 2 bicycles and other sundries. Consequently, within the week under review a total of One Thousand Seven Hundred and Fifty Five (1,755) Boko Haram Terrorists members and their families comprising of 280 adult males, 523 adult females and 952 children surrendered to own troops at different locations. All surrendered Boko Haram Terrorist members and their families were profiled and handed over to relevant authority.

4. Similarly, the air component of Operation HADIN KAI conducted air interdiction on 3 August 2022 at Degbawa near Mandara Mountains in Gwoza Local Government Area of Borno State. The airstrike led to the neutralization of a key Islamic State of West Africa Province Commander Alhaji Modu (aka Bem Bem) and his fighters. Information gathered from the locals revealed that 20 terrorists were confirmed dead in the strike at the location where the terrorists converged for a meeting before the strike. Accordingly, within the weeks in focus troops neutralized 29 terrorists, arrested 55 and rescued 52 civilians. Also, troops recovered 128 rounds of 7.62mm ammunitions, 5 bicycles, 12 AK47 rifles, 4 motorcycles and 5 mobile phones. Accordingly, all surrendered and items recovered have been handed over to the appropriate authorities for further action.

5. Between 26 and 29 July 2022, troops of Operation WHIRL STROKE conducted operational activities in Mararaba, Udege, Kukyo village, Tse-Ibor, Tse Igbakyor, Akwana and Ayibe village in Logo Local Government Area and Nasarawa Local Government Area of Nasarawa State and Modern Market near Mopol Barracks in Makurdi Local Government Area of Benue State. During the operations, troops arrested some notorious criminals who were on the wanted list of the Theatre Command. Notably is the arrest of one Nathaniel Azege who has been terrorising Makurdi town. In the same vein, troops also arrested Moses Aindigh, a (27yrs old) terrorist, and Mr Iluyasu Mohammed (37yrs old). Items recovered during the operation include 1 AK47 rifle, 1 locally made pistol 9 rounds of 7.62mm NATO, 5 mobile phones, 1 axe, 2 machetes among others.

7. On 8 August 2022 based on credible intelligence on the massing up of terrorists loyal to a notorious terrorist Alhaji Shanono at Ukambo village possibly for a meeting. The air component of Operation WHIRL PUNCH carried out air strike during their meeting. In the airstrike a terrorist leader, Alhaji Shanono and scores of terrorists were eliminated. Report from locals source disclosed that 30 AK47 rifles and 20 motorcycles were destroyed while 18 terrorists were neutralized. Source also revealed that 45 kidnapped civilians were released as a result of the airstrike.

8. Troops of Operation HADARIN DAJI in the North West Zone of the Country has continued to sustain operational activities through the conduct of fighting and clearance patrols to clear bandits and terrorists enclaves. On 25 July 2022, troops on routine patrol arrested 5 suspected foreign bandits named, Muritala Wada, Saminu Sani, Shamisu Adamu, Salisu Saadu and Usman Ibrahim at Jibia in Jibia Local Government Area of Katsina State. Furthermore, between 31 July and 2 August 2022, troops arrested one Mallam Yahaya a notorious bandit informant who has been on the tracking list of the Department of State Security for collaborating with bandits on the numerous attacks in Sabon Birni general area of Sokoto State. Troops recovered 161 cattle, 8 camels, large consignment of clothing from terrorists after an encounter in Zango in Shinkafi Local Government Area.

9. In another operation, the Air Component of Operation HADARIN DAJI on 6 August 2022 carried out successful strikes on key terrorists enclave and hideout located at Rudu forest in Katsina State. the air interdiction led to the neutralization of a high profiled terrorist leader who has been on the wanted list of the military named Alhaji Abdulkareem Lawal (aka Abdulkareem Boss) and his foot soldiers. Credible intelligence report revealed that he was responsible for several terrorists attacks, animal rustling and kidnapping and was also known to regularly invite terrorist groups from other areas and regions to join in the attack on his targets. Report gathered from the locals revealed that the terrorists leader was neutralized alongside 27 of his foot soldiers. All recovered items and apprehended bandits were handed over to the relevants authority for further action.

10. Troops of Operation DELTA SAFE has sustained offensive posture to deny criminals the much needed space for their illegal operation in Bayelsa, Delta and Rivers State respectively. In the process several illegal oil refining sites were discovered and destroyed. These includes 3768 dugout pits, 188 storage tanks, 33 wooden boats, 16 pumping machines, 1 generator, 1 vehicle, 175 cooking ovens and 23 rounds of 7.62mm ammunition. Also, recovered was Three Million Seven Hundred Fifty Thousand (3,750,000) ltrs of crude oil and Two Million and Nineteen Thousand (2,019,000) ltrs of Automotive Gas Oil and the arrest of 10 suspected pipeline vandals. Additionally, troops arrested 2 high profile sea pirates known as Fagha Golden (aka Fine Boy) at Nonwa village in Tai Local Government Area and Victor Elkanah (aka Victor Padi) at Pharzy Spring Diagnostic and Wellness Hospital, One-Eleme Local Government Area of Rivers State. The suspects are notorious for the series of armed attacks on oil vessels, kidnapping of expatriates and illegal oil bunkering within the state. The large quantity of crude and Automotive Gas Oil through a great to the economy and the number of arrested crude oil thieves shows the unrelenting efforts by the troops of Operation DELTA SAFE.

11. Finally, I wish to convey the military high command commendations on the efforts of troops in the various theatres of operation across the Country. The media community is also  acknowledged for their partnership and continued cooperation with the military and other security agencies in our quest to return peace to our dear country. Also, The entire populace is hereby appreciated for the support given to the Armed Forces and security agencies in the conduct of their operations while also urging them to continue to provide credible information on criminals in their locality.

Thank you all for your attention and God bless.