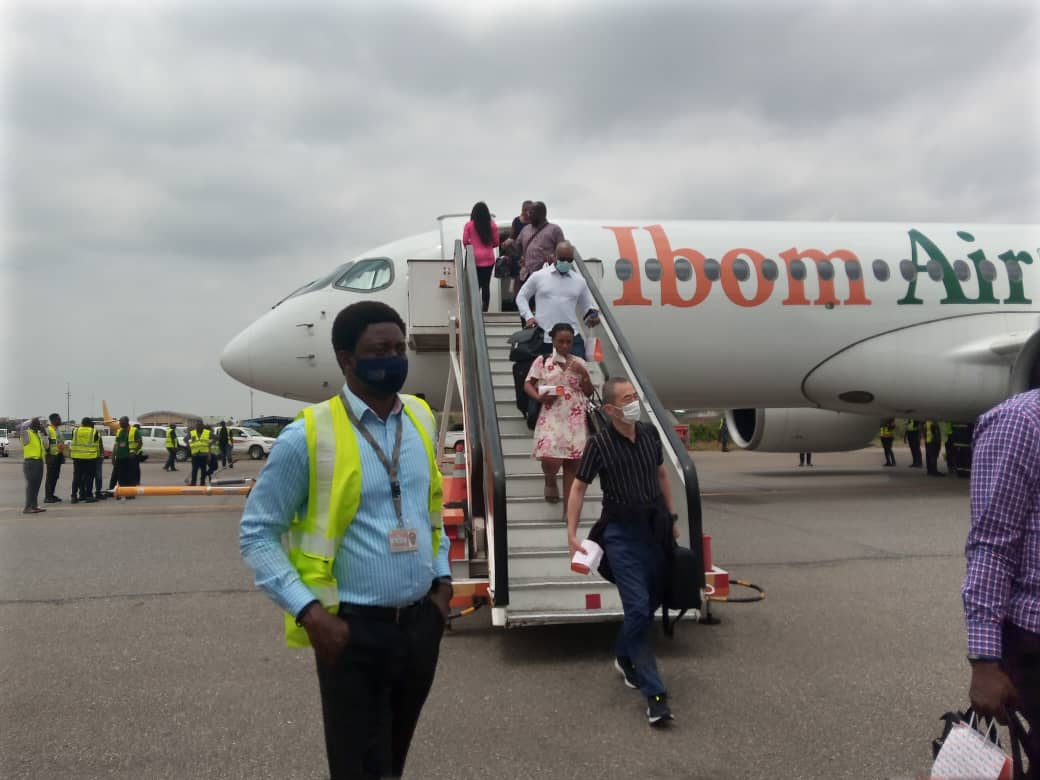 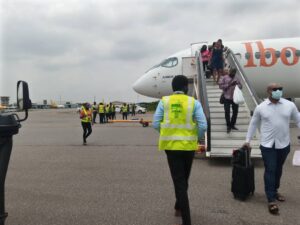 Above & below: Passengers being evacuated from troubled Ibom Air flight.

Passengers on the Ibom Air plane that is stuck on the tarmac of the Murtala Mohammed International Airport say that emergency evacuation did not commence as they earlier thought.

Instead, more engineers have been brought in to deal with the technical problem that grounded the aircraft.

They are wondering why emergency evacuation has not commenced.

But one said: “We are far away from the parking area so I think the idea of many passengers walking the distance to the Arrival Hall is a consideration.”

Shortly after speaking to Everyday.ng, a series of posts on social media arrived. It reads:

Recall that Everyday.ng earlier reported that emergency evacuation had commenced.

Hundreds of passengers on the flight, appear afraid but are said to be calm following the sudden stop of an Ibom Air plane conveying m to the nation’s commercial capital from Abuja.

Details remain sketchy but a social media platform conversation between a passenger and a friend is on-going and posted below:

We landed some moments ago but the aircraft suddenly stopped on the run way. There is fire service vehicle close by and other vehicles. But the crew is not telling us what is going on. It is Ibom Air

Director-General (DG) of the apex regulatory body, Capt. Musa Nuhu, told reporters in Lagos that the twin challenges of fuel and foreign exchange liquidity crises had forced operators into a “pathetic” reality and of “grave concern”.

While he assured that safety remains a priority and non-negotiable, Nuhu said efforts are on to salvage the sector from collapse.

The Guardian earlier reported that the entire local sector might be in for a blackout over loss of fleet capacity that has reduced the operators to 38 airplanes as at weekend.

Findings showed that the eight active airlines are operating a cumulative 38.77 per cent fleet capacity, with a total of 60 out of 98 listed airplanes grounded, pending the availability of foreign exchange earnings to defray maintenance cost.

Nuhu hinted that besides the duo of Dana Air and Aero Contractors that had closed operations over financial issues, the NCAA had commenced financial and economic health audits of other airlines.

“Nobody has to tell you that these are very difficult times. We have done three (airlines) and are still on two or three, because we are taking them in batches. We also sit down to have discussions with the relevant management.

The NCAA DG noted that the Minister of Aviation, Hadi Sirika, had been working with the Airline Operators of Nigeria (AON) to finding solutions to the forex crisis and assuage the rising cost of aviation fuel that currently sells at an average of N1000/litre outside of Lagos and Abuja airports.

On the five per cent Passenger Service Charge (PSC) waiver requested by the airlines, Nuhu said though the NCAA was willing to support the airline to get out of the woods, the statutory charge is an Act of the parliament and only the National Assembly could subject it to review.

He added that the current fate of the aviation industry could not be treated in isolation of the economic environment that it operates.

“What is happening to aviation is happening to all sectors but air transport has become very critical now due to other challenges of travelling by road. But we cannot quantify the lives of human beings. So, with all these challenges, safety remains a priority and it supersedes all other considerations.

“NCAA is neither a police agency nor here to close businesses. On anything that affects safety, there will be no compromise. I will rather shut down an airline than allow them to operate unsafely.

“The truth that it is a very difficult situation, but all parties, even up to the presidency, are working. All hands are on the deck to ensure that the aviation industry does not collapse. We have no choice than to keep aviation working,” he said.

The implication of having only 38 planes active out of a total of 98 or 38.77 per cent fleet operating capacity is most telling in the surging passenger traffic, shrink in flight network and spike in airfares.

This week most seats on the busy Lagos, Abuja, Port Harcourt, Kano and Kaduna routes, where available, were sold for between N76, 000 to N180, 000 for one-way economy seats. Round-trip tickets ranged between N140, 000 to N260, 000, depending on route, airline and time of purchase.

▪︎ Additional report by The Guardian

Happening Now…Emergency evacuation begins as Ibom Air gets stuck on tarmac in...