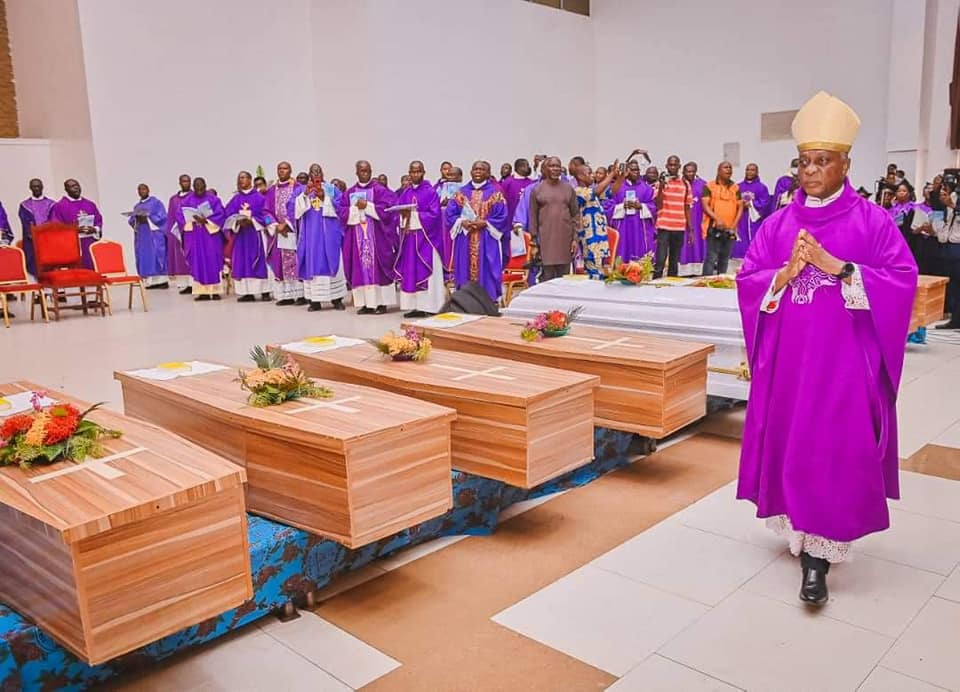 The Federal Government  on Monday condemned the call by five US Republican Senators asking for the redesignation of Nigeria as a country of particular concern because of alleged persecution of Christians.

The Senators who made the call in a letter to the US Secretary of State,  Antony  Blinken also alleged violation of  freedom of Christians’ rights to practice their religion.

Responding to the allegation in an interview with the News Agency of Nigeria (NAN) in London, the Minister of Information and Culture, Alhaji Lai Mohammed said the call was based on false premise and misunderstanding of what was going on in the country.

Recall that in a letter to the United States Secretary of State, Mr. Anthony Blinken, five US Senators – Josh Hawley, Marco Rubio, Mike Braun, James M. Inhofe, Tom Cotton – wrote, “As you are well aware, horrific acts of deadly violence have been committed against Nigerian Christians in recent weeks, including the massacre of churchgoers on Pentecost Sunday and the stoning of a Christian college student. Sadly, such violence has become all too familiar for Christians in Africa’s most populous country. Last year, however, you inexplicably removed Nigeria’s designation as a Country of Particular Concern (CPC) despite no demonstrable improvement in the country’s religious freedom conditions. On the contrary, the situation in Nigeria has grown worse. We previously urged you to immediately reverse your misguided decision, and we write today to renew our call.

“Recent high-profile acts of violence underscore the intense religious persecution that is regularly experienced by Nigerian Christians. On Pentecost Sunday, gunmen attacked St. Francis Catholic Church in Nigeria’s Ondo state, reportedly killing at least 50 churchgoers. Last month, a violent mob brutally stoned to death Deborah Emmanuel Yakubu, a student at Shehu Shagari College of Education in northwest Nigeria. According to reports, some Islamist students were enraged by a “blasphemous” message Deborah had posted in a WhatsApp group, in which she said that “Jesus Christ is the greatest. He helped me pass my exams.” Merely expressing one’s Christian faith has apparently become tantamount to a death sentence in many parts of Nigeria.

“Religious violence and intolerance directed toward Nigerian Christians has worsened in recent years. One report documented more than 4,650 cases of Nigerian Christians who were killed for their faith in 2021. Accordingly, Nigeria earns the dubious honor—for the second consecutive year—of being the deadliest country on earth for Christians.

“We wrote last year that “[n]ot only has the government of Nigeria failed to take meaningful steps to mitigate such violence, but Nigerian authorities restrict and crack down on religious minorities and detain individuals indefinitely on blasphemy-related charges.” We remain concerned that the Nigerian government is failing to protect the religious freedom and basic safety of its Christian citizens. Furthermore, as this year’s annual reports from the bipartisan U.S. Commission on International Religious Freedom (USCIRF) and from your own Department make clear, Nigerian government authorities directly participate in the persecution of Christians, Muslims, and even
non-theists, most notoriously through arrests and convictions under blasphemy laws. Make no mistake: continued enforcement of state-sanctioned blasphemy laws enables the type of deadly violence that killed Deborah Emmanuel Yakubu and so many others.

“When we previously wrote you, we were met with a response which failed to answer our questions about why the State Department views Nigeria as not having engaged in or tolerated “systematic, ongoing, and egregious violations of religious freedom” or even “severe violations of religious freedom.” This is unacceptable, especially because you are required by federal law to consider the recommendation of USCIRF—which, since 2009, has been to designate Nigeria as a CPC. In fact, USCIRF reiterated in its 2022 Annual Report that it was “appalled” at the removal of Nigeria’s CPC designation. Despite public statements from you and other State Department officials condemning the recent bloodshed in Nigeria, the fact remains that the Department still does not officially regard Nigeria as a severe violator of religious freedom.

“The State Department released its 2021 Report on International Religious Freedom on June 2,
which starts the 90-day timeline for the Department to make its religious freedom designations. Given the abysmal state of religious freedom in Nigeria, it is incumbent upon you to reverse last year’s decision and redesignate the country as a CPC. The moment demands that you do so without delay.

“We look forward to your swift action on this important matter.”

But minister Lai Mohammed, who is in London for engagements with
international media as well as
some relevant Non-Governmental-Organisations, recalled that a few months ago Nigeria  was taken out of the list of countries of particular concern because it was proven that there was no iota of truth in the allegation that Christians or persons of any religion were being persecuted or people were not allowed to practice religion of their choice,

“The country also does not have a policy of violation freedom of religion and it is not true that Nigeria persecute anybody on account of his or her faith,” he said.

Mohammed noted that the  Constitution of Nigeria guarantees the right of anybody to practice his or her own faith without molestation and the government has always safeguard the constitutional provision  jealously.

He said most commentators who were not well versed in the politics and happenings in Nigeria took criminalities and communal clashes  as issues of religious persecution.

“Nobody in Nigeria is being persecuted But we have issues of criminality going on and the criminals really do not make distinction of any religion.

“They kidnap for money, they hold people on ransome irrespective of their religion and there are some issues pf communal matters dating back to many years.

“If statistic is to be taken, I can say confidently that as many Muslims as Christians have been victims of these criminals,” he said.

According to the minister, the only known group that target Christians was the Islamic State’s West Africa ProvinceI (SWAP)

He, however said that the federal government had mounted a ;large scale military operations to wipe out the criminals and it is yielding results.

“What ISWAP is doing is that because of their dwindling influence hey are now attacking Churches and Christians n order to create crisis between varios religious group.

“But as a government, we are after them,” he said.

The minister said some NGOs were also feeding the international community with wrong information to get funds from donors.

Mohammed reiterated that the two major religions in Nigeria, Islam and Christianity are also collaborating to find solution to the crisis ad bring peace and harmpn.

He gave the example of  the Nigeria Inter-Religious Council (NIREC) which is working to foster unity and better understanding between the Christian and Islamic faiths.

The minister solicited support from multilateral organisations and foreign countries in tackling the challenges if insecurity.