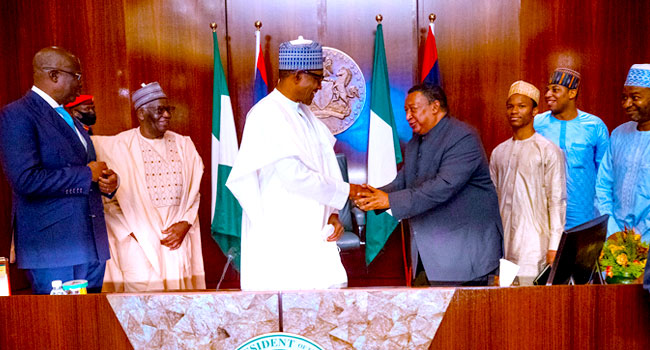 Just hours after he was declared a worthy ambassador of Nigeria by a grateful President Muhammadu Buhari and another official engagement in which he advised the Federal Government to develop new technologies, strengthen human capacity and innovation to meet the world’s growing need for energy, the outgoing Secretary-General of the Organisation of Petroleum Exporting Countries (OPEC), Dr. Mohammad Barkindo, dies. 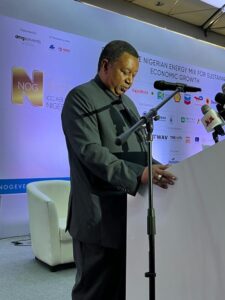 Above: President Muhammadu Buhari exchanges pleasantries with the outgoing OPEC Secretary-General, Mohammed Barkindo, at the State House in Abuja on July 5, 2022; Below: At the oil confab

His death was announced by Group MD of NNPC Ltd, Mele Kyari, who said on his verified
Twitter handle, said: “We lost our esteemed Dr. Mohammad Sanusi Barkindo.

“Certainly, a great loss to his immediate family, the NNPC, our country, Nigeria, the OPEC and the global energy community.

“Burial arrangements will be announced shortly”.

You have indeed been a worthy ambassador of our country,” President Buhari told Barkindo, according to a statement by his his spokesman Femi Adesina.

He added: “We are proud of your achievements before and during your appointment at OPEC and the proud legacies you will leave behind.

“Your time in charge of the affairs of OPEC has been a very challenging one for the global oil industry. Oil producers were finding it difficult to come together to address challenges that were crippling the oil market.”

“Not long after, the world was faced with the COVID-19 pandemic that sent crude prices spiralling down at an alarming rate. You showed incredible leadership to rally industry players and pushed through the turbulent times.

“There is no doubt about your efforts in putting together the Declaration of Cooperation which is the largest in the history of OPEC and the global oil industry and also the longest in duration in the history of the organization. This was a herculean task.”

He applauded the OPEC Chief  for providing experienced administrative management to OPEC, saying his efforts have placed the organization in a stronger position to confront the challenges it will face in the coming years.

At the oil conference, Barkindo said regular investment was needed in view of global oil sector requirement of cumulative investments of 11.8 trillion U.S. dollars in the upstream, midstream and downstream through to 2045 to meet energy expectations.

According to the News Agency of Nigeria (NAN), Late Mohammad Barkindo, OPEC Secretary-General, made this known in his keynote address at the official opening of the ongoing 21st NOG Conference and Exhibition on Tuesday in Abuja.

The conference has its theme as: “Funding the Nigerian Energy Mix for Sustainable Economic Growth.”

“I am confident that the implementation of the Petroleum Industry Act will help unlock the full potential of our petroleum industry, strengthen its ability to attract long-term investment, as well as support a dynamic and diverse economy.

“If our National Oil Companies (NOCs) are to continue to innovate and flourish, it is of utmost importance that they have predictable and unfettered access to investment capital.

“Regular Investment at adequate levels is the lifeblood of our industry. It is essential if we are to develop new technologies, strengthen our human capacity and remain leaders in innovation,” he said.

The OPEC secretary-general said the industry was facing huge challenges along multiple fronts and these are currently threatening  investment potential and in the longer term.

“To put it bluntly, the oil and gas industry is under siege!

“For starters, the evolving geopolitical developments in Eastern Europe, the ongoing war in Ukraine, the ongoing COVID-19 pandemic and inflationary pressures globally have come together, causing significant volatility and uncertainty in the commodity and energy markets.

“Against this backdrop, a number of industrialised countries and multilateral institutions continue to pursue stringent policies aimed at accelerating the energy transition and fundamentally altering the energy mix,” Barkindo said.

He said in a very short timespan, the industry had been hit by two major cycles – the severe market downturn in 2015 and 2016, and the even more far-reaching impact of the COVID-19 pandemic.

He described 2020, the first year of the pandemic as one of the darkest periods in the history of oil, upstream oil capital expenditure which fell by around 30 per cent.

This, he said exceeded the colossal 26 per cent annual declines experienced during the severe industry downturn in 2015 and 2016.

He said the OPEC also projected that total primary energy demand would expand by a robust 28 per cent in the period to 2045.

According to him, oil is expected to retain the largest share of the energy mix, accounting for just over a 28 per cent share in 2045, followed by gas at around 24 per cent.

In other words, he said oil and gas together would continue to supply more than half of the world’s energy needs for many decades.

“These hydrocarbons are especially vital to the energy mix in regions like Africa, which will see massive population shifts and economic growth in the coming years.

“These developments increase the urgency of eradicating energy poverty.

The impacts of the two major market cycles are manifesting themselves in real time,” he said.

Receiving Barkindo at the State House in Abuja, the President said posterity would remember him kindly for making the nation and himself proud during his six years of meritorious service at the helm of affairs as the fourth OPEC Secretary-General from Nigeria.

He directed the Ministry of Petroleum Resources and the Nigerian National Petroleum Company (NNPC) Limited to mobilise the oil and gas industry to organise a befitting welcome reception in honour of Barkindo.

Speaking with President Buhari during his visit to the Presidential Villa, Barkindo attributed his success to the tremendous guidance, charisma, and international gravitas of President Buhari, support from the OPEC secretariat in Vienna, and cooperation by members of the organisation.

He recounted how the counsel from President Buhari helped in the birthing of the Declaration of Cooperation of OPEC and non-OPEC oil-producing countries, after he assumed office in Vienna, Austria in 2016 during a downturn in the sector when oil prices plunged to less than 10 U.S dollars per barrel.

“It was very obvious to me that this was beyond OPEC alone to address,” said the outgoing OPEC boss. “We needed to get the support of other leading oil producers around the world. I recall that I did consult with you, and I drank from your fountain of wisdom and your deep reservoir of knowledge of OPEC and global affairs.

“With your advice and guidance, I set out to various capitals around the world to try to persuade them to understand the gravity of the situation and the need for them to urgently join hands with OPEC.

“I did explain to them that they do not have to be full members of OPEC but we could work together in a framework of cooperation and on the 10th December 2016 we signed this historic agreement in Vienna and on the 1st January, we started working together and we were able to assist the oil market to restore stability.”

Barkindo stated that the Declaration of Cooperation, which is now in its sixth year, also helped the organisation to navigate the turbulence in the market occasioned by the COVID-19 pandemic in 2020.

He explained that amidst COVID-19, the organisation took a decision to withdraw 9.6 million barrels per day from the market- the highest ever adjustment in its history- for a duration of two years.

Barkindo added that OPEC is now in the final lap of restoring the production figures due to a rebound in the global market and economy.

“Throughout the period of my tenure I have continued to benefit from the President’s international goodwill and everywhere I visited in the world both within OPEC and outside OPEC, the first person your fellow Presidents, prime ministers, and kings, ask me of is how is my brother, President Muhammadu Buhari,” he said.

Having survived the major turbulences in 2016 and 2020, Barkindo expressed confidence that the worst is over, and the future looks very promising for the organisation.

He, therefore, thanked President Buhari for giving him the opportunity to serve, pledging that Nigeria would continue to play its leadership role in OPEC as well as in the global oil industry.