Copyright 2021 - All Right Reserved
Home Politics You are a traitor and on your own; Southern, Middle-Belt leaders tell Okowa
Politics

You are a traitor and on your own; Southern, Middle-Belt leaders tell Okowa 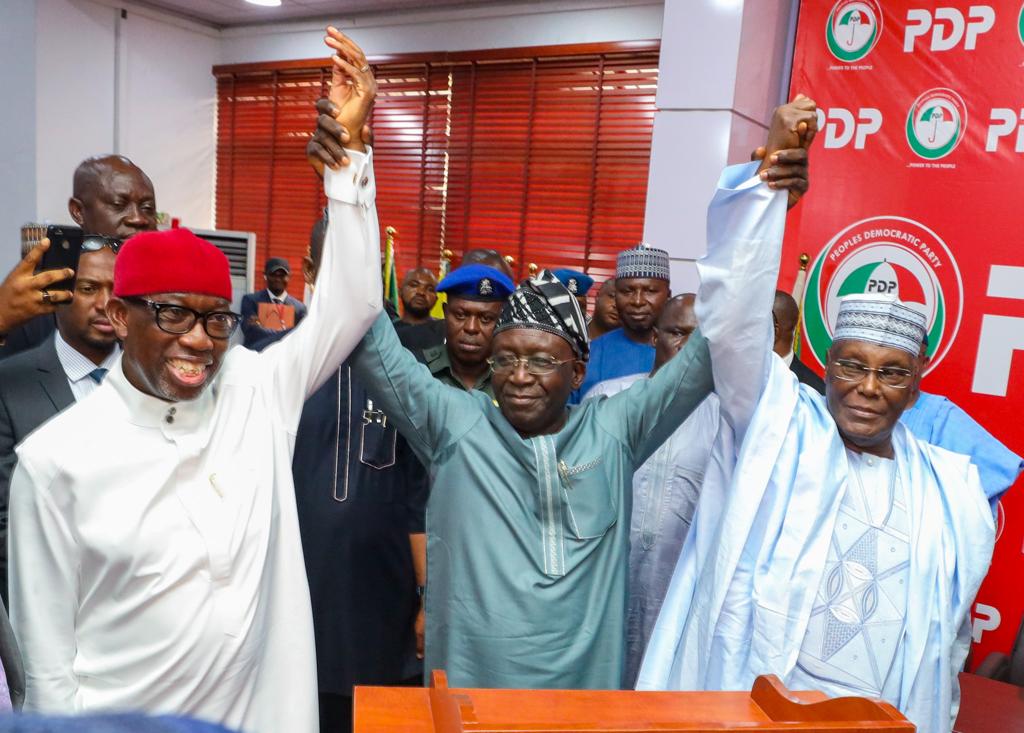 In blistering remarks that bespeak their anger and frustration at the manner Governor Ifeanyi Okowa emerged as the running mate of former Vice President Atiku Abubakar, the Presidential candidate of the People’s Democratic Party (PDP),  southern and middle-Belt leaders have described Okowa as a treacherous character.

Their statement reads in full: “The Southern and Middle Belt Leaders’ Forum (SMBLF) has berated the Governor of Delta State, Senator Dr. Ifeanyi Okowa for accepting his nomination as Vice Presidential Candidate to Alhaji Atiku Abubakar, Presidential Candidate of the People’s Democratic Party (PDP) in the forthcoming 2023 general elections. It is unspeakable and quite disappointing that Governor Ifeanyi Okowa, who is currently Chairman of the South-South Governors’ Forum, and a native of Owa-Alero in Ika North-East Local Government Area (one of the Igbo-speaking areas) of Delta State, would exhibit such barefaced unreliability.

“It bears recalling that the 17 Governors of the Southern States of Nigeria, both of the People’s Democratic Party (PDP) and the All Progressives Congress (APC), under the Chairmanship of the Governor of Ondo State, Rotimi Akeredolu, SAN, met in Asaba, the capital of Delta State on May 11, 2021, and took far-reaching decisions, including that, based on the principles of fairness, equity and justice, the presidency should rotate to the south, at the end of the statutory eight years of President Muhammadu Buhari’s tenure. And this very Governor Okowa was the host of that historic meeting. The Southern Governors later met again in Lagos, on July 5, where they reaffirmed their decision, and again in Enugu, on September 16, to restate the call that the presidency should rotate to the south in 2023.

“It is essential to underline that the Southern and Middle Belt Leaders’ Forum (SMBLF), applauded the meeting of the governors, given its significant representation and the gravity of the outcome; we followed up and issued a similar statement after our meeting in Abuja on the 30th of May 2021, asking that the presidency should rotate to the south. And went further, on several other occasions, to caution political stakeholders from the South, including serving and former governors, ministers, senators, etcetera, not to, on any account, allow themselves to be appointed or nominated as running mate to any presidential candidate, if the presidency is not zoned to the south and that we will work against such person or persons.

“It is, therefore, most unfortunate that the Governor of Delta State, Senator  Ifeanyi Okowa who should know better, accepted his appointment as running mate to Alhaji Atiku Abubakar. We do not have anything personal against  Ifeanyi Okowo but his action is treacherous and tantamount to a despicable pawning of the political future of the people of Southern Nigeria.

“Sadly, it is also now common knowledge that he spent extensive sum of money to lobby for the position. And that explains why he never made any statement when his party, the People’s Democratic Party (PDP), thoughtlessly jettisoned the zoning principle, which has become established as a norm and an intrinsic part of the nation’s political trajectory.

“It is difficult to fathom how a political party can claim to be on a supposed “rescue mission” with such false footings of unfairness, injustice, duplicity and gross insensitivity to national outlook.

“It is regrettable that while most of Governor Okowa’s southern and northern counterparts have maintained gallant, patriotic deference to the unity and peace of the country, above blinkered political considerations, by their resolute stance on the rotation of the presidency to the south in 2023, Governor Ifeanyi Okowa, the Chairman of the South-South Governors’ Forum, of all people, would gullibly and slavishly capitulated to the bonbon of absurdity. Thus, acceding to a situation whereby, one person rules for eight years and hands over to another of his stock, in a country of at least 360 ethnic groups. What a shame!

“The people of southern Nigeria chimed at Asaba, Lagos, Enugu, Uyo, Port Harcourt, Umuahia, and Abuja, continuously, on the zoning of the presidency and warned that another northern presidency, after the eight years of President Muhammadu Buhari, would be injurious to the unity and peace of the country.

“Governor Okowa has, by his action, betrayed the trust reposed on him by his colleagues; the southern governors, the entire good people of southern Nigeria and all well-meaning Nigerians. He has made himself persona non grata, not only, with SMBLF but all citizens who treasure our oneness and yearn for a more united and peaceful Nigeria.

“We, therefore, reject Governor Ifeanyi Okowa and his Vice Presidency, and leave him to his lot, but let the world know that this is a betrayal of the highest order.

“And that this is not a matter of loyalty to one’s political party, but rather a greedy, parochial and unpatriotic action, committed against the general interest of his State, Delta state, the Niger Delta region, and Southern Nigeria. It is, certainly, also not in the interest of the nation at large.

“We commend the patriotism of all Nigerians who cherish our unity and progress as a country and further urge all such Nigerians; in the North and the South; young and mature, the high and mighty; irrespective of religion and tribe, to remain steadfast on the centrality of the presidency rotating to the South in 2023, in the national interest.”