Copyright 2021 - All Right Reserved
Home Politics Who attacked Tinubu’s convoy after his confession that battle for APC ticket ‘hard, I resorted to prayers’?
Politics

Who attacked Tinubu’s convoy after his confession that battle for APC ticket ‘hard, I resorted to prayers’? 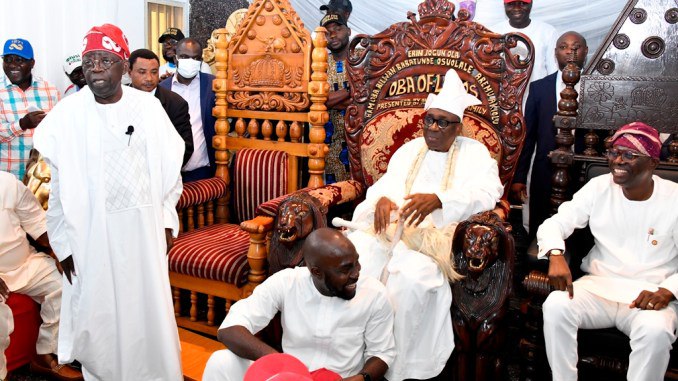 Questions are being raised over what the hoodlums who attacked the convoy of the presidential candidate of the ruling All Progressives Congress, Bola Tinubu, in Lagos, wanted, shortly after his humble confession to the Oba of Lagos that he resorted to baring his mind and prayers when he saw that some forces were arrayed against his emergence as party candidate.

According to a report by African Independent Television (AIT), his convoy was attacked at the Adeniji end of Isale Eko after the former Lagos governor paid a visit to the Oba of Lagos, Rilwanu Akinolu.

His confession when he met the Oba: “There is no Lagos indigene that has had the opportunity to become President of the Nigeria, despite the contribution of the State to the national stability and progress. The highest position attained by any Lagosian in national leadership is the position of Chief Judge of the Federation.

“I took up the fight to break this jinx. The battle to secure the APC ticket was hard. When I was almost fed up, I resorted to prayers. I also poured out my mind when I felt there was a gang up against my person. Thank God that I have brought home the presidential ticket.
The task ahead is to galvanise our people to get their voter cards and vote to enable us realise this ambition. Getting our people to vote is the most important task before all of us. We need to take this message to our people across communities and sensitise them on the need to vote in the general elections.”

Recall that a few days before the primary that he won, Tinubu bared his mind in Abeokuta, Ogun State at a meeting with delegates, explaining why he thought it was his turn to succeed President Muhammadu Buhari.

He narrated all he did to ensure Buhari won, even making remarks that political watchers and APC National Chairman, Senator Abdulahi Adamu, considered inappropriate. Some of the remarks are subjects of skits, comedies, and musicals.

Even the Presidency frowned at the comments and reminded Tinubu he was not alone in ensuring Buhari became President in 2015.

The former Lagos State Governor arrived in Lagos on Sunday after the Ekiti State governorship election and was received at the Presidential Wing of Murtala Mohammed International Airport in Ikeja before proceeding to the palace of the Oba of Lagos.

All roads leading to the presidential wing of the Murtala Mohammed International Airport (MMIA) were crowded in a carnival-like atmosphere as residents of Lagos State trooped to the airport to receive him.

Tinubu was returning to Lagos almost two weeks after clinching the APC ticket during the primaries held early this month in Abuja.

The convoy moved to the palace of Oba of Lagos, Rilwan Akiolu, where the APC National Leader received royal blessings.

According to a press release signed by Gboyega Akosile, chief press Secretary to Governor Samwo-Olu, on Sunday, Tinubu recalled that his victory at the party’s presidential primaries did not come easy, noting that he fought a hard battle to clinch the ticket.

Akiolu, who described Tinubu as his “stubborn son”, said it was time for political leaders in Southwest region to close ranks and work for the victory of Tinubu at the 2023 presidential election, saying the massive support received by the APC National Leader across the country must be complemented by politicians in the region.

The monarch said: “Your emergence as presidential candidate of your party is the beginning of another journey in your political career. All Yoruba ancestors shall be with you on this journey to make our fatherland a better place.”

Tinubu left the palace to his house on Bourdillon Road in Ikoyi, where the APC Governors, led by chairman of Progressives Governors Forum, Atiku Bagudu, were waiting to receive him.

On the way, even as his vehicle and many others had gone past, his convoy was attack.

According to the AIT report, the hoodlums who were wielding swords and cutlasses, threw stones at the convoy as it drove from the palace.

They also smashed side glasses and front windshields of vehicles in the convoy.

Though Tinubu was not affected by the attack, the bus conveying journalists and the backup security car on the convoy were the most affected.