The Village I once Lived 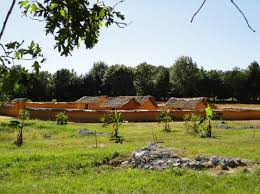 The sun, in a herald of the goodness of God to humanity, rose like a groom waiting for his bride, and shinning on the branches of a short tree standing opposite the window. The atmosphere was a subdued silence momentarily interrupted by a cock crowing in the distance, and the chirping of birds. One could hear in a far distance the scream of little children resuming for the day at a nearby primary school. I was once like them many years ago in this community.

It was a Friday morning in the month of June.

I had woken up for the day, deep in thought. Childhood memories of yesteryears came flooding my mind like angry waves at the bank of a sea. This was where I was born over 60 years ago.

Many things have changed. Not in terms of social and economic development (politicians jump every where  collecting the votes of people, and end up dumping them to their fate), but in terms of passage of generations. In a particular clan – all the people I knew had all either passed away or no more around. Family trees are fastly becoming extinct. No one seems to bother about its preservation for posterity.

My own mother that I saw just a couple of years or so ago is ageing fast. Her hair had turn all white; her gait bent. Inside of me I was in tears! Everything in this life is useless. Weak frame, sickness, ageing and death testify to the vanity of this life. As I walked through narrow roads and paths in the village with magnificent buildings dotting here and there, I spoke to myself, ‘Vanity! Vanity! Who will live in these dwellings after they are all gone, and some of the children in America and Europe? Vanity! Then I sauntered into the compound of an uncle whose funeral had brought me home. Magnificent building. Class. But he is no more. He was just home from the US for Christmas, opened up his new house, and went about the village doing good works. On his way back to the US as he entered his younger sister’s home in Lagos, he gasped for life, and was gone! I looked at the two children, visiting from the US? Will they come here again?

Close by is my own  piece of land that my mother is using for farming. My wife had been thinking of where to retire to, and talked of us putting up a storey building there. I was not excited. I had desired a modest bungalow with a one-room penthouse for study and prayer, but how long will Providence allow me to stay in this side of eternity? I was losing interest in so many things in this world.  God’s word had really dealt a blow in my inner being. ‘Dead to this world and it’s allures and fantasies’!

Back to my mother.

Standing before her, she asked, ” What would you like to eat?”

It was unbelievable not to have yam in our home in the village. Of a truth, my father is dead!

Throughout the years my father was alive we never lacked yam. We would eat, and I would take some for my children in the city. Again, I wept inside of me. I remembered an invitation to come and speak on Fatherhood in a church the following week in Lagos.  Fathers are strong pillars in a home.

I could buy yams in Lagos, not in my village, I protested within me. I had no choice. I was already feeling for my ailing mother. It was a market day. I gave her some money. But I grumbled within me. What is life after all? The people you knew and cherished before lie buried beneath the dust. The two tomb stones of my father and a younger brother nearby speak of many generations that have passed. If not to preach the Gospel, selflessly serve humanity, what is life after all?

I had warned my younger brother not to venture into politics. He countered, “They will not do anything to me.” He thought it’s about physical strength. He became a councillor. It wasn’t long, he cried, ‘My head, my head!’  Spiritually, they got him. He was gone! I was consumed with a conference I was speaking in Burundi that time and did not give a spiritual covering he greatly needed. His death still hurts me till today. Energetic young man, bubbling with energy, gone. What’s life after all?

Not far from my place is our paternal compound. Another uncle had died not long ago. I was told burying him was like war. As the young men were carrying the coffin into his father’s home, there was fierce resistance from an invisible force. They would push and the force would push back. The pall bearers began to sweat. They had to bring reinforcement before the body could go in. Mysteries!

In one of the evenings, I had sat with my mother close by. Again, deep in thought. Sitting also before me was a young girl and her mother. God had sent them to be keeping my mother company and passing the nights with her so that she would not be alone. I asked what the young girl was doing. The mother said she was doing her West African School Certificate Exams. Then I turned to her and asked.

“Did you have a paper today?”

“Fine,” she answered with a smile.

Somehow within me, I knew it was not really fine. But I continued.

“Do you have paper tomorrow?”

It was difficult to believe. How could you have a paper the next day, and you are sitting down. Doing what? When we did School Certificate those years, we were not like that. We would study TDB (Till Day Break) and from there go into the exam hall.

“Do you have past WAEC question papers?” I asked.

“How, How will you practice how to answer the questions?” And the paper was English Language. I was ready to take her through a revision if she had one. Oh, no! I pitied her!

Then the mother interjected. “The teachers in public school have been on strike because the Governor has not paid them, and the other students are not doing any examination.

“But which school does she attend?”
The mother and my own mother chorused, “Kompany”.

They said it is a private school in the village run by Roman Catholic Priests and Nuns. The mother said, that was the school, the elder sister attended. She also did the School Certificate Exams, that her result was purchased by someone.

The mother said the elder sister was very brilliant and was the best in the exams but her result did not come out, that someone purchased it.

This brilliant daughter had become an auxiliary teacher in this school. She teaches, Data processing, Computer Skills and Religious Studies. The invigilator had come again as usual to coordinate another WAEC exams. She engaged him in a discussion. The invigilator not knowing who she was opened up to her about a candidate who was the best in the school but that they sold her result. He mentioned the name, and it was this girl he was talking with.

The girl said, “I am the candidate.”
The man’s jaws dropped. He began to beg her not to expose him. So, it’s not only politicians that are corrupt. Corruption is deep in the system in Nigeria.

Then, I met the girl. Smart by the way she speaks. She was meeting me for the first time, and said to me, “Are you coming for December? (Christmas)

“I am wedding, my fiance lives in Aba. I will send my invitation to you.” She is still very young, and she is going to wed, and not going to the university. But who will sponsor her?

As I write this piece, my mother had been out since morning. She told me she was going to pluck some water leaves in the piece of land. She is not back since. From plucking water leaves she would be doing other works in the farm, I suppose. This is village! It has been 42 years I left it for other life pursuits, and not much has changed.

▪︎ Ndukwe, a missionary and media practitioner, operates out of Lagos and sent this via WhatsApp

Why your ill-mannered child’s behaviour is my business