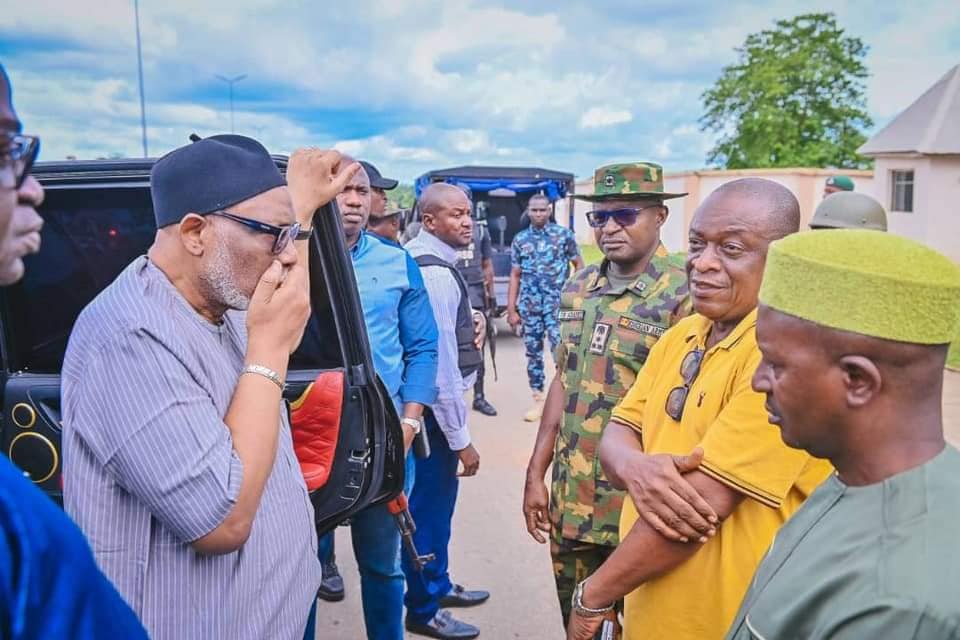 The tragedies have continued unabated, EVERYDAY.
Buhari should STAY at home and face the issues he allowed to fester, focusing on rehabilitation of terrorists, rather than take them out.

The IDPs are in a sorry state and a different conversation, altogether. The insecurity across the land, with impunity is INEXCUSABLE and a downright criminal negligence of the administration.

They have simply refused to commit effectively and responsively, to use available superior technology, sensible security architecture or counter terrorism measures, to liquidate these rampaging bastards from 14 other African countries, who have invaded our people and land with utter impunity.

It is a prime shame.

President Buhari is a trained soldier who knows a lot better to do. This nation of over 216 million people has more than enough human and material capacity. WHY IS BUHARI REFUSING TO DEAL SUMMARILY WITH THESE MURDERERS OF OUR PEOPLE, DESTROYING OUR ECONOMY, LAND AND PEACE?!!

The Owo massacre, was not banditry. It’s clear TERRORISM, as with the others. When will this administration reach ZERO TOLERANCE and do what they should have done seven years ago?!

Nigeria is a laughing stock to the International Community. Except for BBC and sometimes CNN, the rest of the world simply ignores the madness going on in Nigeria. It has become an embarrassment to humanity and the Global Community. The whining, pretentious helplessness and empty speeches of Government is fake and unconvincing, as we watch gargantuan irresponsibility in the manner of electioneering excesses and obsession, while the people BLEED.

Yet, a realistic observation shows, we are just seeing the tip of the iceberg, that has built up, after reckless failure and abandon of the primary DUTY AND MANDATE of Government, namely, the SECURITY & WELFARE OF THE PEOPLE.

This is UNACCEPTABLE. ALL NIGERIANS SHOULD REFUSE TO TOLERATE THIS FIASCO OF INSECURITY AND BAD GOVERNANCE.

The terrorists did not just stroll into Nigeria by accident. Their operations and patterns make apparent that this nation has intentionally and  deliberately been compromised by some wicked and evil agendas, to take over Nigeria, by force, deception and decimation.

These invaders are mere foot soldiers of a sinister agenda, that has come into the open. The foot soldiers brag of it. Their sponsors threaten with it. The political motives for perpetual domination of the Nation State is apparent and obvious. The ETHNIC and RELIGIOUS expressions, are just the fronts, hiding a raw and basic political bent.

The plans have now gone rogue and beyond the control of its infantile political purveyors and sponsors, consuming all in its wake.

Not a single Nigerian should be killed or traumatized anymore!

Mr. President, sir, this falls squarely on your desk, as well as ALL State Governors.

The looting of public treasury registered in the last 3 months is more than staggering. Loads of money that could have been used to secure and build a better country. Investors won’t touch Nigeria with a thousand kilometer pole, despite it having probably one of the highest trade potential in the world. All because of  this deliberate but self-inflicted injury of senseless political thuggery and blatant terror.

Mr President and his team have failed and are failing Nigerians. This is condemnable and sickening.

The Nigeria citizens must persistently speak out strongly to all levels of political power (Executive & Legislative Arms) and take measures, collectively and individually to defend themselves, as provided constitutionally.

We, as citizens, must all have ZERO TOLERANCE, for ALL terrorists, no matter who they are, or their sponsors, ACTIVATE and DEMAND our RIGHTS TO LIFE, DIGNITY, HONOR & PROGRESS.

▪︎ Gbaja, a reverend gentleman, sent this via WhatsApp

With teary eyes, Akeredolu looks toward Abuja over Adamu’s ‘frolic’, says power must shift to south

Gov Simon Lalong: setting the template of unity in diversity