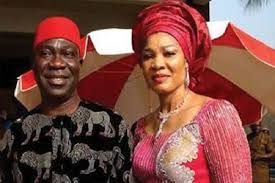 A clearer picture is beginning to emerge as to how former deputy senate president, Ike Ekweremadu, got enmeshed in a scandalous case that will keep him and wife, Beatrice, in detention until July 7, 2022 when their bail application will be heard in a London court.

Their arrest and charge to court, it appears, was a case of doting parents seeking medical help for their ailing daughter, who needed kidney transplant.

A letter dated December 28, 2021, by Ekweremadu and addressed to the Visa Section of the British High Commission in Abuja showed that he actually applied for a visa for a young man to be a kidney donor to his daughter.

But when the young man’s kidney did not match, and wanting to remain in the UK, allegedly weaved a story to the Police that he was trafficked into the UK for an organ harvest.

The man and alleged victim, Mr Ukpo Nwamini David, according to Ekweremadu’s letter was billed to donate a kidney to Ms Sonia, his daughter, who is down with kidney failure and needed a kidney transplant to stay alive.

It was learnt that the process had been concluded with the young man’s consent.

Reports said that David, who is now claiming to the London Metropolitan Police to be 15 years old raised the accusation of been trafficked to push through a request for asylum.

The Police, based on the allegation arrested Ekweremadu and his wife and arraigned them.

Meanwhile, on another platform, one Ikem Okuhu on Facebook claimed he was volunteering some facts on the Ekweremadu matter.

He said Ike Ekweremadu wasn’t involved in any organ trafficking.

According to Okuhu, “He (Ike) has a daughter who needs a kidney transplant and a willing donor was seen in Nigeria and travel preparations were made. 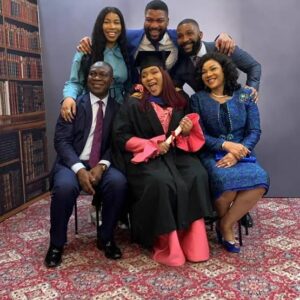 “Ike Ekweremadu did write to the British High Commission, explaining the situation and the donor travelled to the UK with the patient.

“The donor is a 21 year old man and not a girl as many are writing.

“He is not a minor and as it happened, the organ did not even match….

“Not wanting to return to Nigeria, the donor went to report that he was trafficked to London for possible organ harvest, believing the same would guarantee him asylum.”

The letter reads in part; “I am writing in support of the visa application made by Mr. Ukpo Nwanini David who is currently having medical investigation for a kidney donation to Ms Sonia Ekweremadu.

“David and Sonia will be at the Royal Free Hospital London and I will be providing the necessary funding. I have enclosed a statement of my account.”

Below is a copy of the letter: 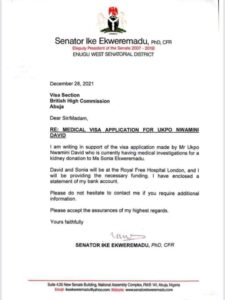 Recall that earlier on Thursday, Ike and Beatrice were denied bail by a court siting in Uxbridge, London.

British SkyNews reported earlier: “Two people have been charged with conspiring to bring a child to the UK in order to harvest organs, the Metropolitan Police said.

“Beatrice Nwanneka Ekweremadu, 55, and Ike Ekweremadu, 60, have been remanded in custody and will appear at Uxbridge Magistrates’ Court today.

“Charges were brought against the pair, who are from Nigeria, following an investigation by the Metropolitan Police’s Specialist Crime team.

“A child has now been safeguarded.

“The investigation was launched after detectives were alerted to potential offences under modern slavery legislation in May 2022,” the force said.