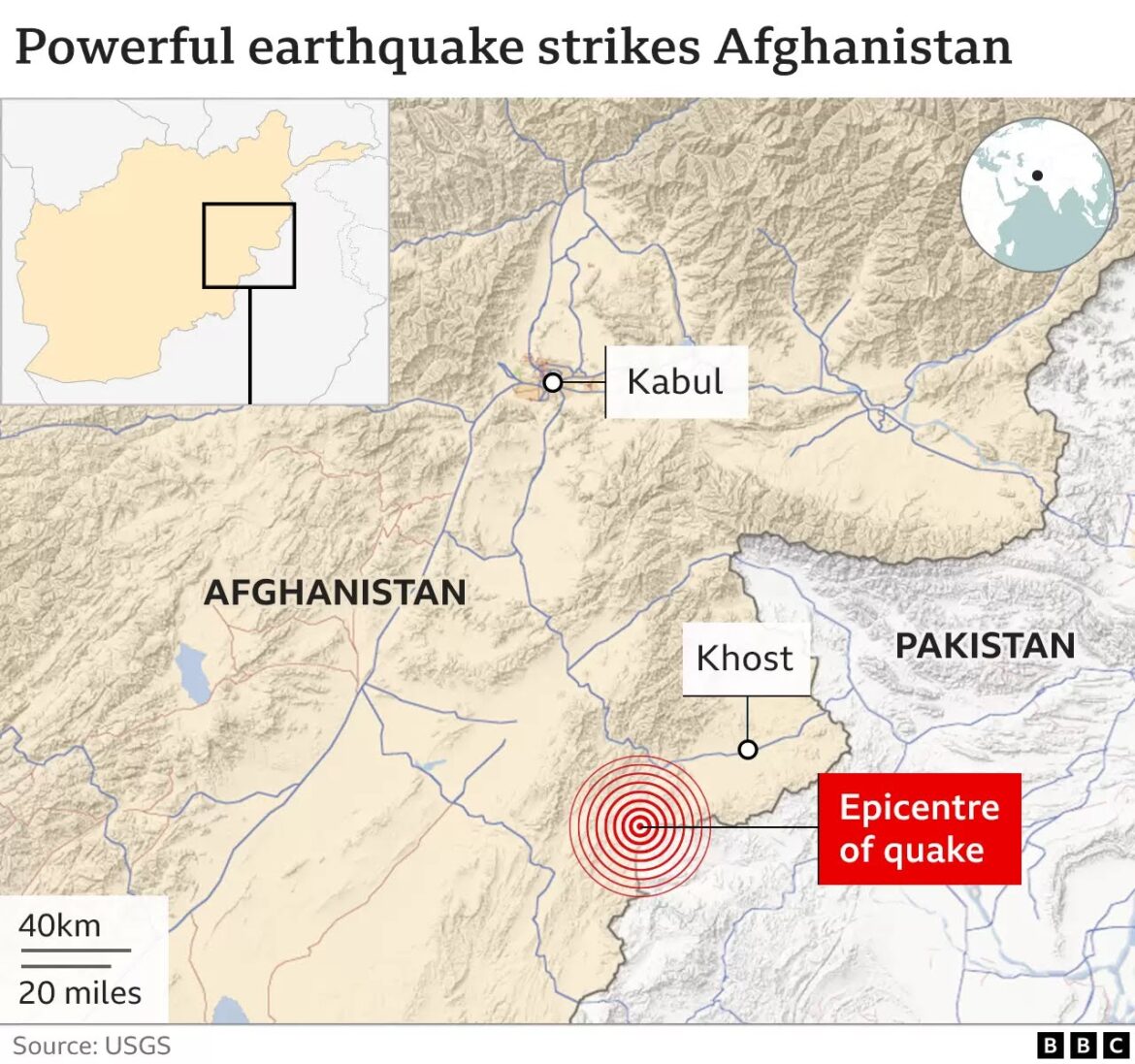 Doctors in Afghanistan have told the BBC that many children may have been killed in Wednesday’s earthquake.

More than 1,000 people died in the disaster and heavy rain, threadbare resources and rugged terrain are hampering rescue workers.

Unknown numbers were buried in the rubble of ruined, often mud-built homes by the magnitude 6.1 earthquake.

“We can’t reach the area – networks are too weak,” a Taliban spokesman was quoted by Reuters as saying.

The United Nations is among those scrambling to provide emergency shelter and food aid to remote areas in the worst-hit Paktika province.

Afghanistan’s health system was facing near collapse even before the disaster.

Survivors and rescuers have told the BBC of villages completely destroyed near the epicentre of the quake, of ruined roads and mobile phone towers – and of their fears that the death toll will rise further. Some 1,500 people were also injured, officials say. 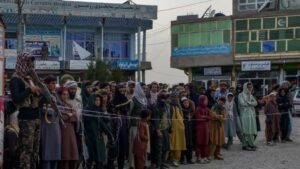 Most of the casualties so far have been in the Gayan and Barmal districts of Paktika. Locals report dozens of villages have collapsed.

One woman in hospital in Paktika’s capital told reporters she had lost 19 family members.

“There was a rumbling and my bed began to shake,” another survivor, Shabir, told the BBC.

“The ceiling fell down. I was trapped, but I could see the sky. My shoulder was dislocated, my head was hurt but I got out. I am sure that seven or nine people from my family, who were in the same room as me, are dead.”

The deadliest earthquake to strike the country in two decades is a major challenge for the Taliban, the Islamist movement which regained power last year after the Western-backed government collapsed.

The earthquake struck early on Wednesday about 44km (27 miles) from the city of Khost and tremors were felt as far away as Pakistan and India.

Afghanistan is in the midst of a humanitarian and economic crisis, and Abdul Qahar Balkhi, a senior Taliban official, said the government was “financially unable to assist the people to the extent that is needed”.

One survivor, Zaitullah Ghurziwal, told the BBC that people had lost everything in the quake.

“Nothing is left here. Our belongings are still under the rubble,” Mr Ghurziwal said. “There are no blankets, tents, there’s no shelter. People are lying on open grounds. We need food and water. Our entire water distribution system is destroyed. Everything is devastated, houses are destroyed.”

The head of the UN, António Guterres said the agency had “fully mobilised” over the disaster. Health teams, medical supplies, food and emergency shelters were en route to the quake zone, UN officials said.

But Mohammad Amin Huzaifa, head of information for Paktika province, told AFP it was proving “very difficult” for rescuers to reach areas “affected by floods because of heavy rains last night”.

Rescuers trying to get in from neighbouring regions have also reported weather hindrances.

“It’s June and the weather shouldn’t be like this. We’ve had hail and snow and it’s made things very difficult,” Obaidullah Baheer from NGO Save Afghans from Hunger told the BBC. “Those roads have never been really developed because of the security situation for the past twenty years, so there are a lot of challenges but hopefully we can get in.”

Communication following the quake is difficult because of damage to mobile phone towers and the death toll could rise further still, a local journalist in the area told the BBC.

“Many people are not aware of the well-being of their relatives because their phones are not working,” he said. “My brother and his family died, and I just learned it after many hours. Many villages have been destroyed.”

Afghanistan is prone to quakes, as it is located in a tectonically active region, over a number of fault lines including the Chaman fault, the Hari Rud fault, the Central Badakhshan fault and the Darvaz fault.

Over the past decade more than 7,000 people have been killed in earthquakes in the country, the UN’s Office for the Co-ordination of Humanitarian Affairs reports. There are an average of 560 deaths a year from earthquakes.

Most recently, back-to-back earthquakes in the country’s west in January killed more than 20 people and destroyed hundreds of houses.

Even before the Taliban takeover, Afghanistan’s emergency services were stretched to deal with natural disasters – with few aircraft and helicopters available to rescuers.

The country is also experiencing an acute shortage of medical supplies and malnutrition rates have been rising.

According to the UN, 93% of households in Afghanistan suffer food insecurity. Lucien Christen, from the Red Cross, said Afghanistan’s “dire economic situation” meant “they’re [Afghan families] not able to put food on the table”.