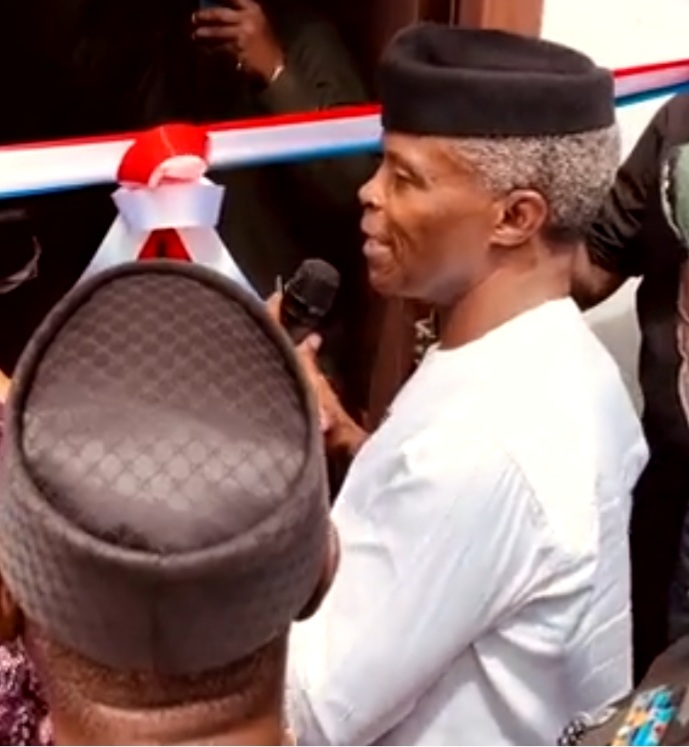 Less than 24 hours after reports emerged from Minna, the Niger State capital, that an aide of Vice President Yemi Osinbajo was heard allegedly inducing All Progressives Congress (APC) delegates with promises of accommodation, feeding, and political appointments, his campaign team has denied the allegations.

The office issued the denial, just as the Osinbajo in Port Harcourt, Rivers State, said the ruling party has the greatest potential to do the best for Nigeria and ensure its further development and progress.

In its denial, the campaign office said, “We have seen an outlandish news report that a so-called “Osinbajo Campaign Organisation has said that it would provide hotel accommodation for more than 7,000 All Progressives Congress delegates across the country during the party’s presidential primary election.”

“Attributing such a claim to Senator Babafemi Ojudu, Special Adviser to the President, in the Office of the Vice-President, the report falsely claimed that “Ojudu announced this to delegates in Minna, while wooing them to vote for Osinbajo during the party’s primaries.”

“For the records, Senator Ojudu at no time made such a claim and the Osinbajo Campaign team has no such plans. Such reported offers of free accommodation and free food should be ignored.

“The Vice President continues to spend time interacting directly with the APC delegates and stakeholders across the States answering their questions on issues of politics and governance. It is the plan and intention of the Osinbajo Campaign Team to keep engaging the APC delegates on the major issues of the day, exchanging ideas on how to move the country forward and  forging a partnership of stakeholders whose collaboration would go beyond the 2023 elections.”

Meanwhile, speaking briefly with the media after meeting with Rivers APC delegates, the Vice President affirmed Nigeria’s future greatness and prosperity, noting that “we are also, of course, completely at one on the idea that the party needs to be united. So, everything that needs to be done is being done, and will be done to ensure unity of the aspirants.”

He further noted that, “Our party is obviously, as you know, not just the ruling party, but the party that has the greatest potential to do the best for this country.

With regards to his consultations with the delegates, Prof. Osinbajo disclosed that “What we spent our time doing today was talking more about national issues, about issues of development; and we all affirm that we have to do a lot of work; we are willing and able to do the work.”

Earlier, the VP at the meeting with the Rivers’ delegates, called for unity among the presidential aspirants, and the party in general.

He also restated his capacity to make a difference in committed, dedicated service to the people of the country as president if elected.

According to Prof. Osinbajo, the best aspirant should be chosen to lead the party as its presidential candidate in 2023.

In his call for unity, the Vice President noted that all the aspirants that have made public their intention to run for president under the APC are progressives.

He said, “We are all progressives, we represent the same point of view; that this country can be better, that we can improve the fortunes of our young people, that our country can be a great place. Every one of us have that desire, and every one of us can achieve that, given the chance.

“Everywhere I’ve gone to, I’ve pointed out that there is no need for conflict of any kind, especially among presidential aspirants. All of us, who are all presidential aspirants, have either worked together, eaten together, one place or the other. We are aspirants today, but only one person would emerge, and we must be prepared to work with that person.”

The Vice President received a rapturous welcome from residents and people in the State, starting from his arrival at the Port Harcourt International Airport, all the way to the Palace where he met with traditional rulers led by the King Jaja of Opobo, Dr. Dandeson Douglas Jaja, Jeki V, Natural Ruler, Amanyanabo of Opobo Kingdom.

It was the same excited reception from residents as Prof. Osinbajo acknowledged cheers from the large crowd as his convoy drove past or he walked down the streets of Port Harcourt, on the way to the venue of the delegates’ meeting and the Osinbajo Campaign Office in the State capital.

At the official opening of the PYO Campaign Office in Port Harcourt, the Vice President, said: “we commission this PYO Campaign Office for the benefit of our great party, Rivers State and Nigeria, and we declare here, that this coming election, including the primaries, we will win, the PYO campaign will win, Professor Yemi Osinbajo will win, and all of us who are here will win, in Jesus mighty name.”

The VP’s prayer was greeted with a loud Amen from the crowd.

Before his interaction with the APC delegates and stakeholders in Rivers, the Vice President had paid a courtesy on the Rivers State Traditional Council led by the King Jaja of Opobo, who is also the Chairman of the Council.

Thanking the Monarch for the honour and reception, the VP congratulated him on his recent 80th birthday celebrations, while acknowledging the prominent roles traditional rulers play in national matters.

“I regard it as a deep honour, not just because our traditional rulers represent our people, culture and values, but also because I strongly believe that traditional rulers play prominent roles in directing the affairs of our society.

In his remarks, King Jaja of Opobo, thanked the Vice President for his “good wishes” and for sending a representative to his 80th birthday celebration.

“That was very kind of you… Let us campaign in peace and let us not add to the challenges that we are going through already,” the monarch stated.

During the interactive session with delegates, Prof. Osinbajo fielded questions from the APC stakeholders present on various national issues, and exchanged ideas on issues of national development, governance and politics.

2023: I’m running as a Nigerian Presidential aspirant, not a northern aspirant – Lawan