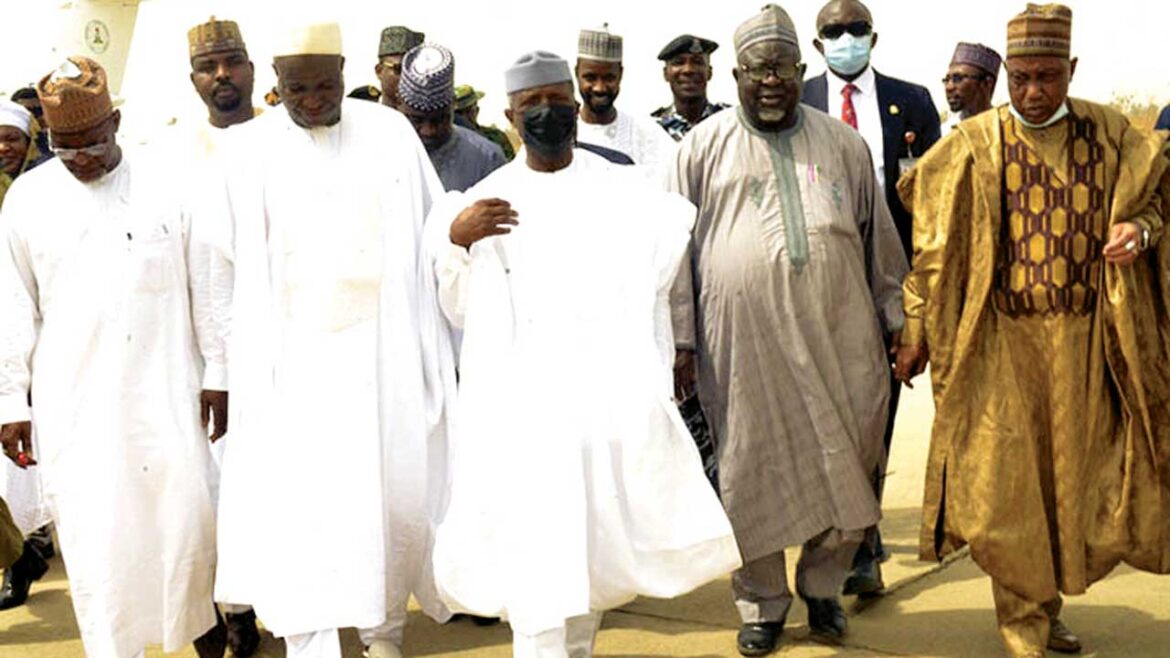 It was gathered that the governor created an emergency trip to Abuja on the day the vice president scheduled to visit the state to meet delegates and seek their votes during the party’s presidential primary election.

Reports from the state say that the governor had relocated to Kano since he declared his aspiration to run for president, as he keeps holding frequent meetings with politicians in respect of his ambition

The vice president shifted the time of arrival to the state from 1.00 p.m to 3.00 p.m as the governor refused to receive the vice president claiming to be traveling to Abuja. He directed his deputy to represent him.

Our reporter in the state gathered that the deputy governor has also been out of the state for some days for his political activities.

Speaking to our reporter the media aide to the deputy governor, Malam Ahmed Haruna said “my boss is not in town, he is in Abuja for screening over his governorship aspiration”.

The intrigues notwithstanding, the stakeholders and delegates of the All Progressives Congress (APC) in Jigawa State interacted with the Vice President Yemi Osinbajo, SAN, Saturday in Dutse, the State capital, in what the VP described as very fruitful conversations.

Prof. Osinbajo’s Saturday visit to Jigawa is in continuation of his nationwide consultations with APC stakeholders and delegates, and his main message was that for the 2023 elections, decisions should be based on what is in Nigeria’s best interest.

On arrival in the State capital, Dutse, the Vice President was received by a crowd of supporters, at the airport and on the streets, APC Chieftains and senior state government officials led by the Secretary to the State Government, Alhaji Abdulkadir Fanini Adamu, who represented  Governor Muhammad Badaru Abubakar.

At the townhall style interaction with the delegates, which also featured a Questions and Answers session, the Vice President restated his view that decisions about the 2023 elections be  based on what is best for the country, its destiny and future as a nation.

He also restated how his training and experience in governance serving as VP under President Muhammadu Buhari, would help him to lead the country effectively as president in 2023, if given the ticket and elected under the APC platform.

Later while speaking during a brief chat with the media, Prof. Osinbajo noted that that he was happy with the interactions with the Jigawa delegates.

“I think it was extremely fruitful, and at least we all understand where we are coming from and where we ought to be in the few years ahead. All of us are very happy that we were able to have this engagement.”

Delegates who spoke during the interactive session, included members of the State House of Assembly, Local Government officials, grassroot leaders and women leaders.

Many of the delegates spoke about the successes of the Social Investment Programmes (SIP), especially the National Homegrown School Feeding programme, which the delegates recalled offered first time jobs for several women. They also commended the contributions of the VP in that respect, while praising other achievements of the Buhari administration, including the efforts to make fertilizer available and affordable, a benefit much enjoyed in Jigawa State.

Others at the interaction highlighted the reputation of the VP as “a man of proven integrity and fear of God,” and his “excellent track record, loyalty and support of Mr. President.”

Generally, several delegates expressed the wish that if and when the VP becomes elected as President he should expand the SIP, ensure youth and women engagements in government, while providing Federal support to Jigawa State agrarian economy.