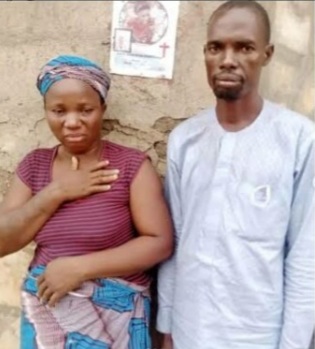 It was a clear case of playing ostrich and politics with the death of his own state indigene in one of the most gruesome ways known to mankind.

Not a visit, not even a phone call to the parents by any known official of the state government, a source said; but the Niger State Governor  Abubakar Sani Bello has appealed for calm in the wake of disturbances and tension in some parts of the North,  following the murder of Deborah Samuel, a Niger State indigene and student of the Shehu Shagari College of Education Sokoto on  the allegation of blasphemy.

Elsewhere and in an interview with journalists, Garba said his family was saddened by Deborah’s killing, but noted that nothing could be done about the situation.

He further narrated how he paid N120,000 to convey his daughter’s corpse from Sokoto to Niger after convincing the Sokoto state government to allow him to bury his child. He has since buried her in Tunga Magajiya, Rijau Local Government Area of Niger State.

Garba said, “We can’t say or do anything, except to take it easy as an act of God. We have left all to God, we have decided to take it like that.

“I went to the Criminal Investigators Department (CID), Sokoto and pleaded with them that since the corpse has been burnt, they should help me with it so that it doesn’t completely decompose so I can bury her”

He stated further that because of the hostile atmosphere in Sokoto, he has to approach the Department of State Security (DSS) for an escort which they agreed, adding “the DSS reasoned with me and followed me. I signed some documents and they gave her body to me”.

“I paid N120,000. It was hard getting anyone who will help us take the corpse down here. Most of the Hausa men were reluctant to help us but you know that no matter the circumstances, someone always needs money”, he added.

Mr. Emmanuel, a father of seven added, “As believers, we have taken this as an act of God. We won’t seek for vengeance or any action. Vengeance is for God not human being, A believer resigns his fate to God”.

He vowed not send any of children to school any more, pointing out that “Everything we have, we put it into the education of Deborah and today, she is dead. There are her siblings here, who because of Deborah’s schooling, we couldn’t send them to school because we can’t afford it.

“If you have anything, you can’t sponsor all your children to such schools. I have seven children, Deborah was the second born. It is all over for me because I don’t have the resources”.

“I personally went and brought back the body of my daughter to enable me to bury my own child. This is because keeping her in the morgue will not return her back.

“When I got there, I met government officials and made them understand the need to allow me take her back home and they agreed with me. When we got to the morgue, those in charge asked me to sign the necessary documents and I did. They released the corpse to me.

“I personally, paid the sum of N120,000 to the driver out of many that refused to convey her back home and it is because of the condition of the remains. Most drivers we approached all refused except one.

“The government wanted me to leave the remains, when they called me, I said no, they should allow me to please, bury my daughter.”

On the other hand, the deceased mother Alheri Emmanuel explained that Deborah was the second out of seven children.

“Because of what happened to me, I will no longer send my children to schools where so much money is involved. Because of her education, the education of some of her siblings suffered as it is so difficult to care for them all at the same time. And, now things are difficult for us.”

In a statement, the Governor Sani Bello talked about peaceful co-existence in a plural society like ours, is not only necessary, but the first condition for growth and development.

He said, “peace is in the best interest of everyone. Without peace we cannot sleep; without peace, we cannot work. Peace is the bedrock of everything. Without it, our dreams die.”

The Governor admonished all to be accommodating and tolerant of our religious and cultural diversities so as to make our society a destination of choice for many people in and around the world.

He appealed to traditional, community, religious and opinion leaders to refrain from making inflammatory statements and encourage their constituencies to continue to be law-abiding.

Governor Sani Bello observed that vile and unfounded rumours and exaggerations have often provided fertile sources of conflict and urged all to dispel them.

He enjoined the public also to be proactive and report issues likely to lead to  breach of the peace to authorities for immediate intervention.

While commiserating with the family of the deceased, the Governor  has  directed the police and other security agencies in the state to deal decisively with any individual or groups, who attempt to exploit the current situation to foment trouble.