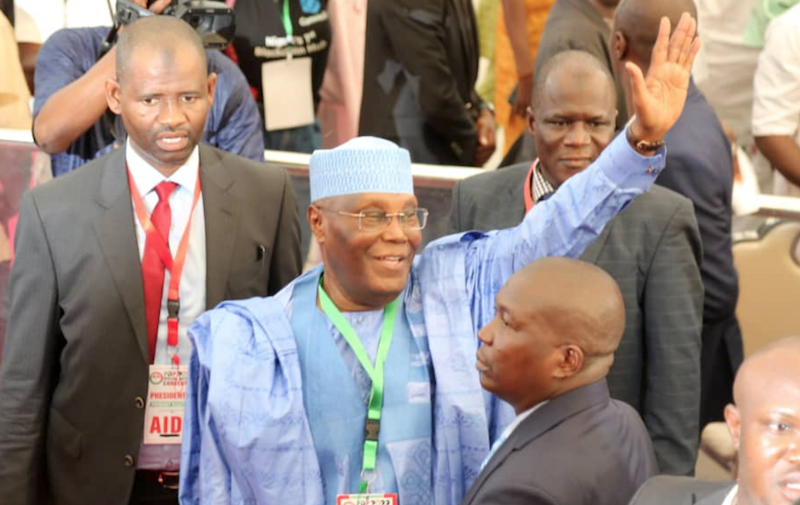 For the second time around, former Vice-president, Atiku Abubakar, will be the official flagbearer of the main opposition party, the Peoples Democratic Party (PDP) in the 2023 presidential election.

Just 10 minutes before Sunday, he was announced the polling 371 votes. Wike got 237 votes; and Saraki 70 votes.

It will be the sixth time in his 75 years on earth that Atiku will be vying to run Nigeria, and in his victory speech, he promised to unify Nigeria, a country almost stripped down the Middle along ethnic and religious lines.

“I pledge to unify this country,” he said in his victory speech. “That’s why I refer to myself as a unifier.

“The reason I feel that unity is important is because APC has disunited Nigerians completely,” the PDP chieftain added. “I will work to restore unity and bring a sense of belonging to all Nigerians.”

He accused the ruling All Progressives Congress (APC) of mismanaging the country but promised to fix the economy and tackle Nigeria’s security challenges.

“The PDP made Nigeria one of the most prosperous countries in Africa. We implemented economic reforms. The APC wiped out all those gains.”

Aminu Tambuwal, the Sokoto governor and aspirant, gave Atiku an easier leeway to emerge victorious when he suddenly withdrew from the race, as voting was about to begin, and  called on his delegates to cast their votes for Atiku.

Three year ago Tambuwal was first runner up to Atiku in 2019 at the party’s presidential primary election in Port Harcourt, receiving the full backing of Wike then.

Tambuwal easily forgot Wike’s gesture in what some observers see as backing his own northern brother; while others say it was a grand plot by the ‘PDP cabal’ to give Wike a bloody nose and whittle down his power in the party. Some say he has not forgiven Wike for always reminding Nigerians of the treachery of Atiku, Saraki, and himself in abandoning PDP in 2015 to side with President Muhammadu Buhari.

Blessed are the persecuted