Copyright 2021 - All Right Reserved
Home News Army Commander missing, over 40 others killed after troops clash with terrorists in Taraba
News

Army Commander missing, over 40 others killed after troops clash with terrorists in Taraba 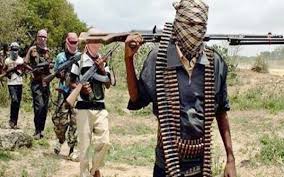 At least six soldiers, a police officer and about 40 others have been reported killed in an ambush and attack by terrorists in Tati, a community in Takum Local Government Area (LGA) of Taraba State.

The soldiers were said to have eliminated an unspecified number of the terrorists.

According to reports,  the police officer was gunned down after he saw the terrorists and shot at them. He ran out of bullets and was killed by the terrorists.

The Commanding Officer 93 Battalion, Takum was said to be driving in the vicinity with his men and joined the fray.

He was abducted and six other soldiers in the convoy killed.

The Takum Local Government Area Chairman, Mr. Shiban Tikari, was quoted as saying that the terrorists were well trained.

“If you hear of their mode of withdrawal and attacks, you will know that they are well trained. When the army got to Tati community, they heard the sporadic gunshots and because the terrain is a difficult one, they followed them up with motorcycles.

“The commanding officer is still at large and that is why the soldiers went into the bush in search of him. We recovered six corpses of the army personnel with the exception of the commanding officer. We are still waiting for them to come out so as to know more.”

The Commissioner of Police in Taraba, Abimbola Sokoya, has confirmed the incident, adding that the slain policeman was attached to the 67 Police Mobile Force (PMF) team in Takum.

He added that the incident left an unconfirmed number of locals killed and several houses razed, while a reinforcement had been sent to Takum to ensure a robust joint operation.

“There is a joint operation going on right now – i.e between the military and other security agencies and normalcy is being restored,” the police commissioner stated.

He explained that there has been an existing communal crisis between the Fulani herdsmen and the Kuteb-speaking tribe before the advent of the terrorists.

According to him, the Police Anti-Bomb Squad is investigating the incident and will soon update him on its findings.

Meanwhile, the House of Representatives on Wednesday expressed grave concern over the death of the soldiers, Policemen, and others.

They urged President Muhammadu Buhari to embark on massive recruitment of personnel into the Nigeria’s Armed Forces to prosecute the war against terrorism ravaging the country.

Two Taraba lawmakers namely: Hon. Danjuma Usman and Hon. Rimamnde Shawulu lamented killings, and pushed through a motion asking the Chief of Army Staff and Inspector-General of Police deploy more men to secure the embattled Takum LGA in Taraba State and fish out the bandits.

In his lead debate, Hon. Usman noted that on Tuesday 10th May 2022, terrorists attacked Tati village in Takum Local Government Area of Taraba State.
He pointed out that the farming community was razed down by the bandits who had arrived in the area the previous night and butchered 42 civilians, policemen and six soldiers.

According to him,“In response to several distress calls made by the residents, Security agents mobilized scantily to the area.

“The bandits ambushed the security agents who were outnumbered and in the ensuring face off six soldiers were killed; this was after the bandits had earlier killed a policeman at a checkpoint and other civilians at Tati; the Commander of the 93 Battalion is missing in action.

“The massive movement of the bandits to the area had been reported by residents to government agencies and functionaries as well as security agencies some days back.

“The Security agencies, especially the 93 BN of the Nigeria army and some units of the Special Forces (Operation Wild Stroke) had engaged the bandits successfully last week and seized dangerous weapons from them.

“About a month ago the bandits had struck at Kwentwen, Kwencwen, Kwenmboi (Quarry), Gangum 2, Tati-Kumbo and Tati area. Others are; Bassang, Fawen, Kashiten and Muji in Takum and Ussa Local Government Areas respectively and killed over 46 persons without any serious challenge.

“The House is concerned that these bandits are increasing their reach and destabilizing more parts of the country.

“The House is also concerned that these bandits operate in very large numbers and in this instant case, less than 20 military men are confronted by over 300 well armed bandits.

“The House is disturbed by this persistent and consistent killings of both security personnel and civilians that may dampen the morale of our soldiers and encourage the bandits to cause more havoc.

“The House is further disturbed that Nigeria has one of the lowest ratios of Soldier to civilian population and the men are overstretched as operations are taking place in almost all States of the Federation.”