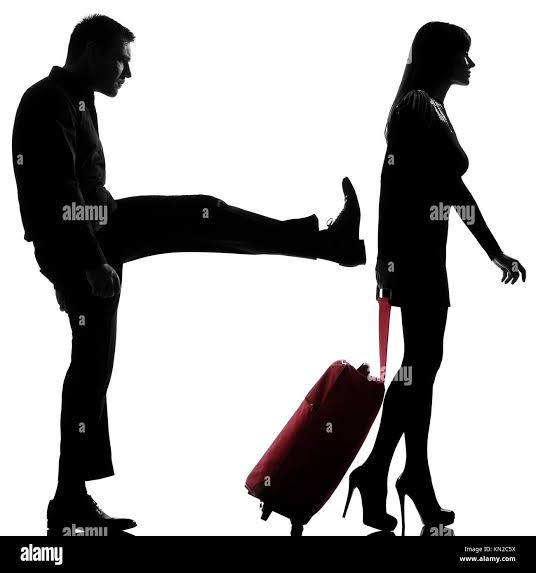 Recent events have provoked some deep thoughts on this recently coined marital maxim that’s beginning to gain wide acceptance. It is becoming increasingly acceptable in Christian circles to counsel a wife that finds herself living with an abusive situation that is tending towards domestic violence to pack her load and leave before she is killed. The thinking is, “it is only the living that can seek a marital resolution”. And against the backdrop of two recent cases of well-known women (especially the Gospel singer of the “Ekwueme” fame) that have been purportedly beaten to death by their husbands, it is becoming easily canonizable to persuade women to quickly separate, even if they will not divorce.

I personally feel the pain of these tragic deaths and loss to the body of Christ and humanity.

However, the sentimental feelings of sympathy with the deceased and domestically abused must not be allowed to gradually push the Church towards accepting a dangerous “one degree deviation” from the truth. If we do, it will eventually crystallize into the “divorce on demand” era into which the backslidden church of the Western world has already been plunged.

PLEASE HEAR ME OUT!

I know that this opinion is held by some of my well meaning friends and colleagues in ministry but permit me to “dissent sharply”, hoping I can do it in love! I feel personally responsible to sound the alarm for the sake of our younger generations, before we hand over a compromised marital gospel.

God not only hates divorce, He does not like separation! To say He does not hate separation is to say He likes it, He does not mind it and He actually accepts or encourages it. That, to all intents and purposes, is very very far from the mind of God for the marital institution.

All of the above is simply the theology of our subject but we must settle theology to help us map our way through the maze of the practicalities of every day living.

Am I therefore saying that wives should stay on and die in domestic violence? No! I am saying that separation is not the divine solution and is never the first option. To quickly separate is a lazy easy way out approach to solving issues that necessarily starts small and long before the incidence of domestic violence.

Getting married in virtually all cultures, is a long emotional process of wooing and love bargaining. Most marriages are neither forced nor imposed. Both usually profess love and affection. So, something somewhere somehow causes the love-turned-hatred. What eventually becomes domestic violence usually starts with some little little irritations which if not handled or mishandled snowballs into big trouble. So beating a wife does not happen without signals.

Let me say upfront that nothing, No! nothing justifies domestic violence from a husband to his wife. And it is only a weak, incapable husband that vents his frustration on a delicate object of love and affection that the wife represents. Any man who beats his wife has confessed his poverty of spiritual and mental capacity to command a submission by his life and wisdom from his wife. Only after such internal admission do men reach for their fists to conquer the weaker sex.

However, truth be told, unless a man is diagnosed with insanity, nobody beats his wife without a provocation. And most women believe in their caustic tongues and speech as adequate weapon of retaliation whenever they feel cheated by their husbands.

I even heard a woman preacher in the wake of these discussions, tell her congregation that God gave women “a mouth that runs” to balance the physical power he gave to the men. I do not doubt that women generally has the power of the tongue but I dare say they were not given such capacity to abuse and provoke their husband; just the same way God did not give the man physical power to beat his wife.

The marital problems we have today can neither be solved by violent fists nor caustic mouths. Both only result in the divorce that God manifestly hates.

When we teach young people about marriage I tell them “Marriage is 20% correct choice plus 80% correct principles”. That a couple secured the will of God in marriage is not a sufficient basis for a stable enjoyable marriage. They must determine to follow the Manufacturer’s manual for marriage and simply obey the single, single instructions to every member of the home . . .
— Husband love (care for, tend, grow).
— Wife submit (follow, defer to, honour).
— Children obey (respond, follow instructions)
— Fathers provoke not (harass not)
— Servants obey (not with eye service) and
— Masters, forbear threatening.
Ephesians 5 & 6

Most people who quickly recommend separation (forgive me) are simply unwilling or unable to do the labour of painstakingly identifying the irritation point in a marital conflict, removing the thorn that’s reddening the eyes and applying the balm of Gilead. That’s why real Pastors are never quick to recommend leaving. They know it is the beginning of sorrows for all involved and especially their children who suffer untold mental and developmental disabilities as a result. They simply roll up their spiritual sleeves and get their gifts working to restore love and harmony where it has ebbed out. I admit they do not succeed in all cases but I can confirm they do in much more cases.

Marital problems can be solved.
Marital storms can be calmed.
Jesus can still speak . . .
“Peace, be still”.
There’s virtually no irredeemable marriage once one or both parties can be brought under the reign of Christ.
By the special grace of God, I have seen marriages that have already degenerated into domestic violence, mended and become beautiful even when we had no access to the battering husband. God still performs such miracles today.

Even though I know that emotions are high now, and there’s a justified outrage against the husband that allegedly killed this wonderful worship voice, a gift to the body of Christ, yet we must not allow the pendulum swing too wildly to the extreme of setting a dangerous attitude towards conflict in marriage. All of us who have been married for upwards of two, three decades know that even if marriage is a bed of roses, roses have thorns in their branches. Marriage is a union of two unrelenting forgivers. And once the heart melts, the clenched fists become cuddling hands.

We must not produce a generation that holds marriage very loosely and are ready to jettison their marital vows at the slightest opportunity. Satan may have repackaged the concept of divorce into the “leave to live” gospel, aided by the actions of few carnal men who batter women in response to whatever offence; yet we must not buy it of his hands.

We must not establish an error in trying to rectify another. Yes, the woman may in these extreme cases leave the house or dangerous vicinity temporarily, she must not first think of leaving the marriage. These extreme cases must NOT be allowed to set the normal doctrine for the rest of us as if they are in d majority.