Copyright 2021 - All Right Reserved
Home Opinion For opinion piece of inside details of APC crisis, Buni lashes out at newspapers
Opinion

For opinion piece of inside details of APC crisis, Buni lashes out at newspapers 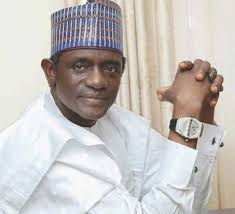 Rather than castigating Mai Mala Buni, governor of the backwater Yobe state, who has shown more preference for the chairmanship of the All Progressives Congress (APC) Caretaker Extraordinary Convention Planning Committee (APC-CECPC), to providing leadership for the good people of Yobe state, and putting him in the dock for high crimes against the APC, a section of the media is annoyingly celebrating his “return” as a resounding victory. The surprise is not that the media does not seem to mind Buni continuing to hold the party hostage rather, some media apologists have taken great delight in deriding the G19 governors led by Nasir El-Rufai, for attempting to save the APC, return the party to being led by properly elected officials and describing these patriots as failed coup plotters. What an irony?

To portray El-Rufai, the governor of Kaduna state and spokesman for the 19 APC governors, who were expressly mandated by President Muhammadu Buhari to ensure that the March 26 convention holds, after several Buni-engineered postponements to serve his ambition to emerge as vice president, as a spoiler, is not only turning history on its head but also, an unwarranted demonisation.

It is important to stress that the main outcome of the events of the last few weeks, is that the thrice postponed convention will eventually hold, as Buni can no longer shift it. That was the principal objective the president and the 19 APC governors set out to achieve. Buni’s antics are now public knowledge and as such, he can no longer use the postponement strategy for a self-serving purpose. For the uninformed, the victory belongs to the party and not to Buni, Yahaya Bello and Hope Uzodimma, who have nothing to lose should APC collapse.

The media has tried to completely misrepresent the facts of the healthy internal contest, while portraying villains as winners, rather than calling them out. How on earth can those working extremely hard to save the party from imminent death at the behest of the president, the leader of the party, be accused of trying to destroy it or be tagged failed coup plotters. And the culprits, the sit tight Mai Mala Buni, being rewarded with a pat on the back? It just doesn’t add up. Sadly, the media, especially the print media, lacks a professional body or regulatory authority that can check its excesses, the same way the Nigerian Broadcasting Commission (NBC), closely monitors the electronic media.

The headlines are not only a sad commentary on how low the Nigerian media has descended but acutely depressing, because it is misinforming and misleading Nigerians, who have invested trust in the media for unbiased reports and informed analysis. It is most embarrassing for readers to equate professional mass media practitioners, with untrained citizen journalists, that operate on new media platforms such as Facebook.

It was always going to be tricky getting Buni out because he had become like a bull in a China shop. More worrying was that his body language showed readiness to wreak further damage on the party, knowing that he has the Independent National Electoral Commission (INEC), behind him. And they didn’t fail him. The president and the 19 governors were ever mindful of that fact, in navigating a solution to what was a difficult situation. If Buni was forced out, the president and the G19 would have run afoul of the 21 days legal notice that it needs before it can hold its convention. It would also have meant moving the convention to May, which the president is opposed to and which is what Buni, had wanted all along. To get around the lacuna, the president and the El-Rufai group settled for Abubakar Bello, the deputy to Buni, to take over. And he was already delivering on the matching order from the president by swearing in the state chairmen that Buni refused to, months after their election.

With Buni, the APC found itself in the kind of difficult situation King Solomon did. King Solomon had to make a decision between two women, who both laid claim to a child. They argued forth and back about whose son was alive and whose had died. Solomon knew he needed wisdom to handle the situation as the APC knew. To determine the real mother, Solomon ordered that the surviving baby be cut into two halves, and given to each woman. The real mother outrightly rejected the decision while the fake mother wholeheartedly welcomed it. The real party members have shown willingness to bend backwards to ensure the party survives, while the Buni group has continued to flex muscles.

King Solomon was convinced beyond doubt by the natural motherly reaction of the first woman, who rather than accept her child being cut into two, implored the King to give the baby to the other woman. Buni is like the woman that urged the king to go ahead with the splitting exercise because he has absolutely nothing to lose. Buni is a typical politician that stands for nothing. It is the tragedy of our recruitment process that has thrown up the likes of Buni, Bello and Uzodimma.

The APC, it must be recalled, kicked out Adams Oshiomhole, who was a disaster. The party then brought in Buni to stabilise the fractured party by holding the convention. Like they will say in the motor park, APC entered one chance. While Adams left without a fight, Buni is ready and willing to collapse the party. John Oyegun had equally left without any hesitation, once the president asked him to throw in the towel. So why is Buni, who wasn’t elected, proving so difficult? Is it a confirmation of the insinuation that he has a deal to destroy the party? Or is it because he is serving the interest of some ministers and political associates of the president?

On the president’s letter, it is what it is. But the president knows El-Rufai pretty well since they politically teamed up. He knows El-Rufai does not issue threats. He will either write or convey his feelings directly to the president, which El-Rufai’s traducers can’t do. Those sponsoring libellous stories in the media are just wasting their precious resources on a worthless venture because El-Rufai-led G19 is on more solid ground.

We remain a united family, with much respect to our President

The attention of His Excellency Yobe state Governor and Chairman APC Caretaker Extraordinary Convention Planning Committee, Hon. Mai Mala Buni, has been drawn to some media reports specifically in The Observer Times and The Cable.ng, two online publications, in which the authors are trying to set party stakeholders against one another,  to ignite an unsolicited crisis, just a few days to the party’s National Convention.

The two reports which seem to suggest a Victor and Vanquished positions from the recent happenings in the All Progressives Congress when His Excellency Governor Buni travelled out of the country for medical attention, are irresponsible and deliberately intended to instigate disaffection and acrimony among the critical stakeholders of the party.

Since the intervention of His Excellency President Muhammadu GCFR, via a Press Statement issued by his Senior Special Assistant on Media, Malam Garba Shehu,  calling on stakeholders to shun media war, backstabbing and name-calling, the Progressive Governors and all other stakeholders obliged to the presidential directive.

Therefore, it is irrational, absurd and irresponsible for anyone to at this moment initiate animosity and resentment among the stakeholders who are working assiduously for the success of the upcoming Convention.

Similarly, upon his return and assumption of office as Chairman of the party, Governor Buni described the incident as a past event and there is no Victor, No Vanquished.

He commended his colleagues on the Caretaker Committee for the great job they have done under the acting chairmanship of Niger state Governor, Abubakar Sani Bello.

The Governors and other Critical stakeholders are now heading various sub-committees of the Convention and have been meeting with the chairman to ensure a successful arrangement for a successful Convention.

Therefore, it amounts to irresponsibility for anyone to write an injurious opinion in complete disregard to the directive from the President.

The party and all stakeholders would not condone such disrespect to the President to deliberately cause confusion and divert attention from the cause of having a fruitful Convention.

The authors for such baseless, flimsy, and unwarranted articles, should be cautious of the negative impact of such deliberate sabotage on the party and the good relationship between the Governors and their followers.

The Chairman warned that the party would not tolerate such irresponsibility and advised the authors to either work for the unity of the party or just watch if they have nothing to contribute positively.

“We remain a united family, with much respect to our President and one another, and loyal to our party. We are collectively committed to the success of the forthcoming National Convention, we will not be diverted from this noble cause of moving the APC forward”.