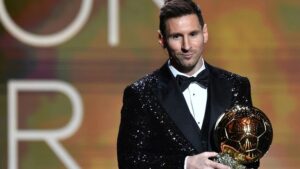 The Champions League quarter-final draw took place on Friday and threw up some tasty ties.

There’s no space for Lionel Messi or Cristiano Ronaldo, but let’s be honest… PSG and Manchester United have been rubbish this season considering the talent they have.

So, instead of worrying ourselves about the above pair, let’s instead look at the winners and losers of the QF draw.

• Benfica caused a couple of shocks on the way, but Liverpool’s superior quality over Portuguese opposition was highlighted in their 5-1 hammering of Porto

• Chelsea may be unbeaten in their last five encounters against Real Madrid, but they’ll need all the help they can get against a much-improved Blancos side

• Indeed, Karim Benzema is in potentially the best form of his stellar career, underlined by his comeback hat-trick against PSG

• And with sanctions against Roman Abramovich meaning Chelsea may have to play their home leg behind closed doors due to being unable to sell tickets, a tough road lies ahead

• Despite their 3-0 heroics against Juventus, Villarreal are probably the weakest of the remaining sides

• Bayern were superb in the group stage, winning all six of their games

• ‘Loser’ is something we’d never call Cholo to his face, but it’s undeniable that beating Man City is a big ask

• After all, Atleti failed to beat both Liverpool and Man Utd at home this season – and only squeaked past the latter with a 1-0 win at Old Trafford

• Even if Simeone can mastermind another success, he’ll have to face either Real Madrid or Chelsea in the semi-final.

Ebelechukwu Obiano not with us – EFCC