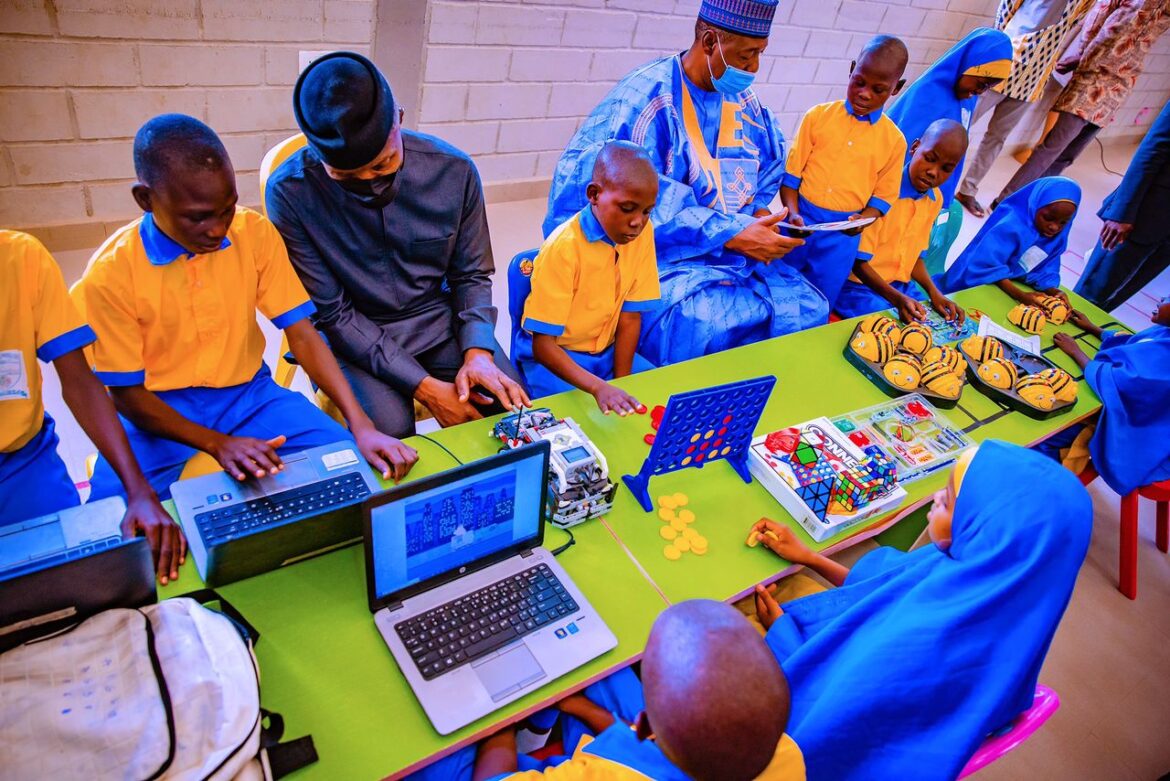 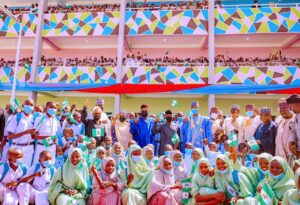 Above and below: Osinbajo and Zulum in the midst of pupils and students of the schools. Photos by Tolani Alli

Maiduguri, the capital city of Borno State, was agog on Thursday during a one-day visit by Vice President Yemi Osinbajo, SAN, who commissioned projects executed by the State Government and headlined the 30th edition of the National Micro, Small and Medium Enterprises (MSMEs) Clinic held in the State.

All along the road as the convoy passed through several streets in Maiduguri, the residents trooped out in excitement and large crowds turned out with placards and much cheer at all of the events. On the path to the palace of the Shehu of Borno and other destinations during the visit …, different sets of school children lined the streets clapping and singing, displaying much affection for both the President and his deputy who was in town. There were drumming and dancing all over the place with much fanfare.

Prof. Osinbajo, who was hosted by the Borno State Governor, Prof. Babagana Zulum, visited the holding camp of thousands of returnees who had fled the State during the worst days of the insurgency, where he interacted with them and delivered President Muhammadu Buhari’s message of hope and restoration.

The VP informed them that the President recently set up a Repatriation Committee which he was asked to Chair, with the Borno State Governor as Vice Chair.

According to the VP, the Presidential Committee “will take care of you and return you to your homes. We are going to do the best that we can so that you can continue with your life and do your work. By the grace of God, all will be well with you, God bless you.”

This news attracted a wide applause from the returnees who had fled in the wake of the insurgency to neighbouring countries like Niger and Chad.

Earlier this month, the President had set up the Committee on the Repatriation, Return and Resettlement of Internally Displaced Persons (IDPs) in the North-East of Nigeria, and tasked it with the responsibility of activating a permanent solution for effective and practicable restoration of the returnees. 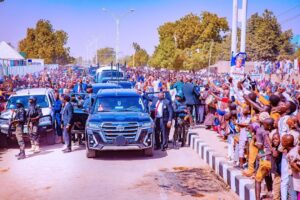 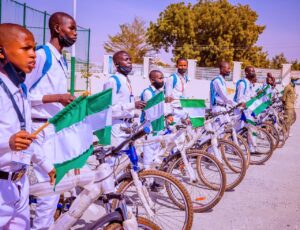 The President had directed members of the Committee to “dedicate more time to the conduct of field visits to regularly engage with state government, communities and key stakeholders.”

At the MSMEs Clinic, the Vice President emphasised that in furtherance of its efforts towards providing infrastructure and improving the business environment, the Federal Government will continue to work with private sector partners to support the MSMEs sector.

The VP also commissioned a number of projects, including the Legacy Doctors’ Quarters and the Resilience Commercial Centre, a business hub facility.

Afterwards, he went to the Children Learning Centre, a school set up by the North-East Children’s Trust, a charity he had championed during his 60th birthday to support orphans who are victims of the insurgency in the North-East.

There, Prof. Osinbajo and the Governor interacted with the children who were obviously excited on seeing and meeting the VP, and were singing and chanting joyously all through the short visit to the school. In particular, the pupils were chanting, “welcome ‘Daddy Osinbajo!’”

From the centre, the Vice President went to the palace of the Shehu of Borno, Abubakar Ibn Umar Garbai, El-Kanemi of Borno, to pay courtesy call on the paramount ruler, where he spoke about his visit to the State, thanked the Shehu for his fatherly support and also commended the visionary leadership of Governor Zulum.

He said: “I am always excited to come to Borno State; this State has proved so many things; it has proved what Nigeria can be; how resilient we are; how courageous we are; how committed we are to the Nigerian project.

“From the days of former Governor, Kashim Shettima, now Senator, I have seen a steady hand of progress here in Borno State; a commitment to development, a commitment to growth. And then over to Gov. Zulum, who has proved that it is possible to do incredible things with very little.”

In his remarks, the Shehu of Borno, Abubakar Ibn Umar Garbai, praised the Buhari Administration for the restoration of peace in the State and the North-East in general, noting that the entire people of Borno were appreciative of government’s efforts and Prof. Osinbajo’s dedication to the cause of peace in the region.

While commending the Federal Government for ensuring the restoration of peace in Borno, Gov. Zulum thanked the VP for his personal commitment, stating that “we want to thank you for the enormous contributions that you have been making towards to the reinstatement of the displaced communities in Borno State.”

The other projects commissioned by the Vice President before attending the 30th MSMEs Clinic include an ultra-modern senior secondary school, named after the late Alhaji Mai Deribe, and a 4.3km road project. Again, at the school commissioning some of the orphans who attended the Children Learning Centre and now mainstreamed into Senior Secondary School (SSS) in the State were on hand to show appreciation to the Vice President with a big greeting card signed by 171 of them. They narrated how it is that they are all being referred to as “Osinbajo’s children.”

On arrival at the venue of the MSMEs Clinic, the Vice President inspected the exhibitions by participants. One of the products was an electric car, which the VP drove briefly, with the Governor sitting in.

In his remarks, Prof. Osinbajo announced the establishment of a shared facility for use by small businesses in the State to be completed within four months.

According to the Vice President, “the FG government working with our private sector partners will put up a world-class Shared Facility for MSMEs here in Maiduguri.

“Furthermore, Mr. President has directed that such facility, which must reflect the choices of the people of the State, must be commissioned within 4 months. With these marching orders, the relevant Federal and State Government agencies and the relevant private sector partners must get to work and quickly identify a viable cluster for the benefit of MSMEs in the state.”

Shared Facilities, the Vice President said, “are provided to MSMEs clusters by the Federal Government and involves installation of specialised machinery that can be used or rented for short periods by business owners. Such facilities spare MSMEs from the financial burden of having to purchase their own equipment while giving them access to the latest equipment.”

Prof. Osinbajo added that “in addition to its other interventions, especially in providing infrastructure and improving the business environment, the Buhari Administration is committed to supporting MSMEs because we know that the can-do spirit of Nigerians, when given necessary impetus, is a driving force for innovation and creativity, which are known catalysts for rapid economic progress.”

Speaking on the MSME Clinics and gains recorded over the years, Prof. Osinbajo explained that “they serve as a bridge between the Federal Government, State Government and small businesses in each State. It does this by bringing all relevant regulatory agencies – whose work impact on the business experience of MSMEs – together in one place to consult and solve problems over a one- to two-day period.  The idea is similar to providing an opportunity for patients to consult doctors in a mobile clinic.”

Encouraging States to leverage opportunities created by the Clinics, the VP noted that “all the needs and queries of MSMEs cannot be met in a one-day period, which is why we also encourage State Governments to establish MSME One-Stop-Shops.

Reiterating the commitment of the Federal Government to the growth of small businesses in Borno and the country at large, the Vice President said people of the State had benefitted from other interventions by government.

“It is pleasing to note that MSMEs in Borno State benefitted fully from all tracks of the Survival Fund Scheme. The data shows that close to 30,000 MSMEs benefited across all its tracks with the total amount of N1.5 billion helping both business owners and employees alike.”

He commended Governor Zulum of Borno for the giant strides recorded in the state, noting that “the entire country has observed, with admiration, the dedication, commitment, compassion and integrity that you have approached your duties as a Governor of this State, at a time of such immense security and economic challenges.

“In the midst of the crisis, you have built 8,000 housing units, the first flyover in Borno State, several mega schools. You have demonstrated what is possible with clarity of vision (even with limited resources), and a love for the people you serve. Well done and keep it up.”

On his part, Governor Zulum thanked the Vice President for sparing time to visit the state and commission projects, aside from attending the 30th MSMEs Clinics.

He pledged the commitment of the State government to work in partnership with the Federal Government and other partners to improve the lives of the people.

The VP also stopped by the camp of surrendered insurgents and their families before departing the State on Thursday.

He was accompanied on the visit by some members of the National Assembly, including Sen. Abubakar Kyari; Hon. Muhktar Betara; Ministers of State for Industry, Trade and Investment, Ambassador Mariam Katagum; Agriculture, Mustapha Baba Shehuri; and some heads of agencies, among others.

Buhari signs, seeks amendment to Electoral law; Ekweremadu says, We’re not yet there, but it’s a quantum leap

ASUU ends warning strike, will it make it indefinite as talks resume...