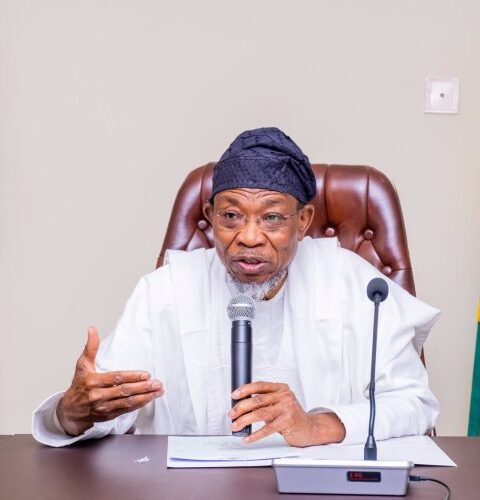 The Police Command in Osun has denied the report that the Minister of Interior, Rauf Aregbesola, was attacked and shot at by hoodlums in Osogbo. The police, rather, said that the minister’s convoy with thugs in tow was the source of the shooting that shook Osogbo on Monday.

The Police Public Relations Officer (PPRO), SP Yemisi Opalola, in a statement on Monday in Osogbo, said that it was some of the minister’s escort that shot into the air without provocation, causing people to scramble for safety.

“Today, Monday, at about 5.40pm, the Minister of Interior, Mr Rauf Aregbesola was moving in convoy of personnel of NSCDC, Correctional Service, Immigration, as well as some unidentified armed people, suspected to be political thugs along Orisumbare/MFS Road, Osogbo.

“Suddenly, some of the security escorts of the minister started shooting sporadically into the air without any provocation nor attack, thereby causing members of the public to scramble for their safety.

“Thirteen empty shells of G-3, assault and AK-37 rifle were recovered along the road after the minister’s departure.

“No casualty, however, was recorded”,  the PPRO pointed out.

She, however, said that the report of the incident was still sketchy, adding full report would be made available  at the end of investigation.

According to her, the situation is under close monitoring and normalcy has returned following the minister’s movement with the alleged thugs through Osogbo.

Recall that the Osun State Commandant, Nigeria Security and Civil Defence Corps (NSCDC), Commandant Emmanuel Ocheja, had assured residents of the state of adequate security amidst the mayhem caused by the alleged attack on the the Minister of Interior, Ogbeni Rauf Aregbesola’s convoy on Monday.

Commandant Ocheja, who spoke through the Command’s Public Relations Officer, Assistant Superintendent of Corps, Atanda Olabisi, said ‘unknown hoodlums attacked the convoy of the former Governor on Monday evening around Old Garage area in Osogbo, the state capital. However, the security details of the minister were able to disperse the hoodlums and bring normalcy to the area.

Commandant Emmanuel Ocheja said “Osun State is a peaceful state and the Command will continue to render excellent and all–inclusive security services in the state, in line with the statutory mandates and functions of the Corps. Professionalism and impartiality is the watchword of NSCDC at all times.”

Earlier, the Publicity Secretary of the All Progressive Congress (APC) factional group, Comrade Abiodun Agboola, accused the Governor Gboyega Oyetola’s administration  of spreading deliberate and criminal misinformation on the alleged attack on the Minister of Interior, Ogbeni Rauf Aregbesola.

In a statement issued in Osogbo, the factional APC spokesman added, “It is callous and unfortunate that the minister is being harassed with a view to shutting him out of the state with the governorship primaries in view.”

According to him, Aregbesola’s convoy was attacked by some armed political thugs at Orisunmibare, Osogbo, while coming from Ilesa around 5:30pm on Monday.

Political hoodlums, carrying guns, were said to have waylaid and shot their weapons on spotting the minister’s convoy

As the story goes, security operatives on the convoy  stepped down from the vehicles and started shooting in a bid to scare away the armed thugs. The situation allegedly led to a panic

But the APC spokesman said: “May we note that the hoodlums were led by Oyetola’s head of political thugs, Asiri Eniba, apparently at the behest of his sponsor.

“Consistently, the Oyetola government had been on the game of attacking members of The Osun Progressives (TOP), which has the backing of the Minister.

“It is unfortunate that the Oyetola government who had always wanted to tarnish the good name of the minister quickly put up a report, deceiving many that the Minister “invaded” Osogbo and sent it to the unsuspecting media for use.

“It will interest members of the public to as a matter of fact, note that Aregbesola had entered town from Ilesa Garage and, as usually demanded by the people on the street, came on the open roof of the car, passing through Itaolokan, Ojaba, Station road and Orisunmbare with mammoth crowd swarming on his convoy and without any incident until the convoy was attacked at old garage where the Asiri Eniba gang attacked the convoy.

“It is important note that the stretch of the Minister’s trip which had been peaceful was about 10km without any incident until around old garage area which is the base of the chief thug.

“Safe for the mischief of the Oyetola’s government to unjustly run the Minister out of town, simply because of their mortal fear of his popularity, no person has been wounded in any of the Minister’s outings.

“May we ask the mischief-maker-government to produce the dead bodies of the people claimed to have died today in Osogbo. The Oyetola’s administration should burry its head in shame.

“It is only a cowardly and irresponsible government that will be scaring away the people it is ruling for whatever reason.

“It is a shame for the Oyetola-led-administration that Osun, which was adjudged as the third most-safest state in Nigeria before Oyetola became governor is now a state where political violence and insecurity now thrive.

“Monday’s attempt on the Minister’s life is a confirmation that Osun is no longer a safe state. We can only pray that the Almighty would keep the good people of Osun state and her well-wishers safe.

Hanifa: School proprietor reverses self on murder, says not guilty, but agrees to conspiracy charge