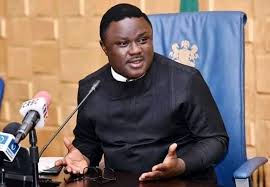 The EndSARS protest in Cross Rivers State cost former governors, senators, serving federal lawmakers from the state and others property worth over N27b, senate report has said.

The Senate Joint Committee on National Security and Intelligence; Defence; Police Affairs; Judiciary, Human Rights and Legal Matters disclosed this in a 69-page report on the mayhem visited on the ancient city of Calabar during the EndSARS Protest on 23rd and 24th of October, 2020.

The report of the committee, under the chairmanship of Senator Ibrahim Gobir, was considered on the floor of the Senate on Wednesday.

Gobir, in his presentation, said that Investigative Hearings by the Committee revealed that the violence in Calabar metropolis during the protest which led to the looting and destruction of private and government-owned properties was “largely spontaneous with no identified goals, leaders, sponsors or financiers”.

The lawmaker disclosed that one of the victims of the protest, Senator Bassey Ewa Henshaw, who appeared before the Committee, attributed the violence to the displacement of the people of Bakassi as a result of ceding their homelands to the Republic of Cameroon, a situation which turned some of them into militants.

In addition, the Joint Committee stated in the report that a total of forty-one (41) government properties were vandalized by hoodlums during the #endsars protest around Calabar municipal and neighboring Bakassi, Odukpani and Akpabuyo Local Government Areas of  Cross River State.

The Joint Committee in its findings revealed that at the time of the invasion of homes, the Security Agencies failed to promptly respond to distress calls from victims, adding that several victims got hint of the planned attacks before the actual acts.

The Joint Committee disclosed that the financial value of the vandalised property/items were also submitted by the affected persons verified by the Committee set up by the Governor amounting to the tune of N73bn.

Accordingly, the Senate in its recommendations, urged the Federal Government to evolve and implement holistic reforms in the Nigerian Police Force.

According to the upper chamber, employing more able bodied personnel, injecting more financial resources for the purpose of procuring arms,  ammunition and other policing gadgets, as well undertaking regular training would ensure efficient policing in the country.

It called on the Federal Government of Nigeria to give priority in terms of security to Cross River State considering the peculiarity of the State with very large land mass.

The Senate also resolved to transmit the cost of N34,255,427,822.44 billion naira; and N10,927,321,757.50 billion naira to the Cross River State Government as amount to defray the cost of rebuilding and reconstructing vandalized and looted property belonging to private individuals and federal government agencies, respectively.