The House of Representatives Speaker, Hon. Femi Gbajabiamila, has given the Minister of Niger Delta Affairs, Senator Godswill Akpabio, 48 hours to produce the list of federal lawmakers who benefited from 60% of contracts awarded by the Niger Delta Development Commission (NDDC). Akpabio made the allegation while giving testimony at the House Committee on NDDC’s investigation on alleged N40 billion Corruption probe.
Gbajabiamila spoke on Tuesday a day after Akpabio made his allegations and was taken on by female lawmaker, Hon. Boma Goodhead, who refused to be restrained by Committee Acting Chairman, Hon. Thomas Ereyi-Tobi.
Akpabio was stopped by the chairman who kept saying, ‘it’s okay Minister’, while the female lawmaker continued to push the minister for answers to her own questions, despite attempts by the chairman to hush her.
The Videos:


Recall that in his testimony before he passed out, the Acting Managing Director of the NDDC had corrected the figure the figure spent on handling Covid-19 matters among staff within a six-month, stating that it was not N1.5 billion that was spent but N1.32 billion.
Meanwhile, Akpabio, says he does not have knowledge of any contract allegedly awarded to the Chairman, House of Representatives Committees on Niger Delta Development Commission (NDDC), Rep. Olubumi Tunji-Ojo.
Tunji-Ojo stepped aside to allow Ereyi-Tobi, his deputy to preside over the investigations, following the insistence of the NDDC that he was a complicit party.
Akpabio said that he was yet to see contract documents made to Tunji-Ojo’s company.
His words: “I am not sure if NDDC awarded contract to the Chairman, House of Representatives Committee, Rep. Olubumi Tunji-Ojo. 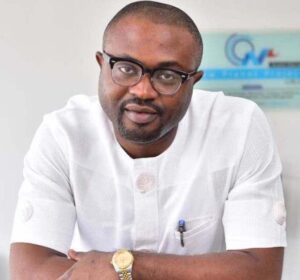 “For me to say that, I need to see that contracts were awarded to his company; may be the contract was awarded in the area where he comes from in Ondo.”
On the rift with the former acting Managing Director of NDDC, Ms Joy Nunieh, Akpabio alleged that she was sacked for insubordination and for being without an NYSC (National  Youth Service Corps) discharge certificate.
On the forensic audit, Akpabio said that the forensic audit directed by President Muhammadu Buhari is ongoing and that the process had not been hijacked as alleged in some quarters.
He explained that the NDDC draws its funds from two sources, the Federal Government and the oil companies.
Akpabio recommended that the budgeting system for NDDC be changed so that it will reflect budget lines in the Appropriate Act.
He also recommended some amendment to the NDDC Act to prevent the management from spending beyond its threshold by splitting big projects into small components.
Akpabio said that management of the NDDC had spent N4.2 billion, which is beyond its threshold by splitting projects into small components of N49 million to evade the approval of the supervising minister.
The minister said that no member of staff of the NDDC had been sacked under his watch, saying that even those on leave got COVID-19 allowance.
Contrary to allegations claiming that the IMC had spent N81.5 billion between February to May, Akpabio said only N23 billion had been spent.
The minister said that only three contracts had been approved since he was appointed as minister of the ministry.
According to him, the contracts include the procurement of forensic auditors, purchase of official cars for NDDC and the award of emergency project on the control of COVID-19.
He told the lawmakers that all contracts were approved by the Federal Executive Council (FEC); except of the emergency COVID-19 project.
Akpabio said that at the time of his appointment, there was no budget running and could not have compelled the then IMC to pay N10 billion for Christmas largess to all state.
He said, prior to the implementation of the of the TSA account, the NDDC had over 300 accounts across commercial banks saying that with such systems, monies could get missing.
However, an analysis, which has gone viral on social media discountenance the ongoing drama which seeks to blur what actually took place at NDDC.
It reads: “So while Professor Pondei, Minister Akpabio, and Madam Nunieh are diverting our attention with faint spells, alleged sexual harassment and slaps, let us stay focused on the real issues at hand.
Do you really understand this NDDC Issue beyond the melodrama?
The real issue is that an Interim Management Committee of the NDDC allegedly did the following:
1. Spent N81.5 billion as sundry expenses, including graduation ceremonies in the United Kingdom during lockdown.
2. Spent N3.14 billion for COVID-19 palliatives for staff.
3. Spent N1.3 billion on community relations.
4. Spent N85.6million for travels during lockdown between February and May 2020.
5. Spent N122.9 million on condolences between February – May 2020.
6. Spent N23.8million on consultancy.
7. Spent N2.6 billion on medicals,.
8. Spent N790.9 million as imprest
9. Spent N1.9 billion on Lasser fever
10. Spent N706 million on legal services
11. Spent N1.121billion on public communication
“In all these expenditures nothing was “spent” on Projects in the Niger Delta for the good of the common man for whose purpose the Commission was set up.”
▪︎ Additional reports by NAN.

(Opinion) Presidency’s comment on continuous bloodshed in Kaduna is lame; and mark of ineptitude, complicity