For the second time this year, a top government official has been attacked outside the shores of the country by angry Nigerians. This time, it is Transport Minister Rotimi Amaechi, who confirmed the attack on his Twitter handle @ChibuikeAmaechi.
He was attacked inn Madrid, Spain while attending a conference on Climate Change by persons he described as “misguided Nigerians” 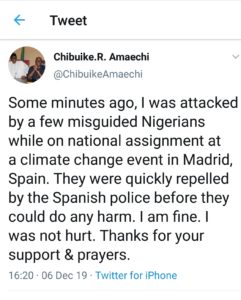 Last August, former Deputy Senate President and Chairman of the Senate Committee on Environment, Senator Ike Ekweremadu, was attacked by members of the Independent People Of Biafra (IPOB) in Nuremberg, Germany last August.
Details of the attack on Amaechi, other than his own narrative, are yet to emerge, and it is not known if he was attacked by IPOB members.

My impression on what happened to Sowore in court, by Wole Soyinka