Apparently humbled by his defeat on Saturday by Senator Smart Adeyemi in the rerun of the Kogi West Senatorial District election, Senator Dino Melaye is waxing philosophical, thanking God for escaping five assassination attempts.
His words On Twitter: “I want to specially thank God almighty that he preserved my life after five attempted assassination, combined forces of security agencies, INEC, federal, state and LG powers,” he said.
“I was fought on land, in the air and spiritually. It was not about election but my life. God I thank you. The forces against me are not beyound God. People should not worry about me, i am fine and will always be. I just thank God that the plan to kill me did not succeed. A living dog is better than a dead lion. I thank God for life. My name is Daniel i can not fall or fail.” 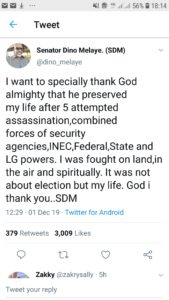 He has said he will contest his loss in court.
Melaye and Adeyemi have over the years swapped positions with Adeyemi replacing Melaye in the Upper legislative chamber. Also, in the last five years both men have swapped parties and stay in the Senate.
Adeyemi, who was in the Peoples Democratic Party (PDP) in 2015 lost his Senate seat to Melaye who moved to the All Progressives Congress (APC) from the PDP. He was in House of Representatives on the platform of the PDP before the 2015 elections.
Melaye was in the Senate until his last year there when he returned to the PDP. Meanwhile, Adeyemi had moved to the APC.
After the February 2019, Melaye was declared winner. Adeyemi contested the victory at the tribunal, and won there. Melaye appealed. The court ordered a repeat election which culminated in an inconclusive election that Adeyemi won.
Both men have since continued their battle of words even after the election.
Melaye, on twitter handle, said: “The reaction of men and women of goodwill all over Nigeria especially the wonderful people of Kogi west who truly voted for me is a testimony that God is with me and with us all. I won the election and Adeyemi remain my political wife,” he said.
Adeyemi, in his response, said: “When a servant steals the garment of his master, the garment will be too big for the servant… the joy of having his master’s garment will cause the servant to misbehave to people he ordinarily could have respected. The over-sized garment made Melaye to misbehave while in the senate.”
The Independent National Electoral Commission (INEC) declared Adeyemi of winner of the Kogi West senatorial seat after the Saturday’s supplementary election.
Returning Officer, Prof Olaide Lawal, said Adeyemi polled a total of 88,373 votes to defeat his main challenger, PDP’s Senator Dino Melaye who polled 62,133 votes.
Adeyemi was leading with 20,570 votes during the November 16 senatorial rerun election before the poll was declared inconclusive.