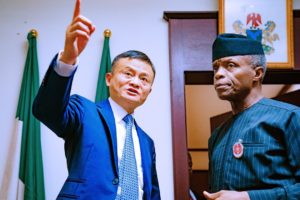 Release
By Laolu Akande, Senior Special Assistant to the President on Media & Publicity, Office of the Vice President
The creativity and resourcefulness of young Nigerians doing incredible things in the technology space across the country and beyond present great opportunities for partnerships with global technology giants, according to Vice President Yemi Osinbajo, SAN.
The Vice President stated this on Thursday when he received a delegation of Chinese technology entrepreneurs led by Co-founder of AliBaba Group, Jack Ma, at the Presidential villa.
Mr Ma is in Nigeria on the invitation of Vice President Yemi Osinbajo as part of the Federal Government’s efforts to promote technological innovation amongst young Nigerians as a means of job creation.
According to him, “…just as you said, Nigeria represents an incredible opportunity and potential, and we had spoken a few minutes ago about how Nigeria will in another two decades or so become be the third largest in terms of population in the entire world. The largest segment of that population are young people, under 25, who will be over 60% of that population.
“This is exciting time for us and we are really happy that you are here and I know the young people and lots of businesses and entrepreneurs are looking forward to your interaction with them later today. 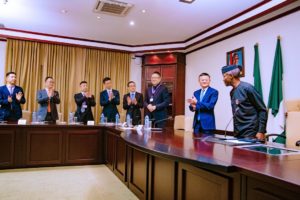 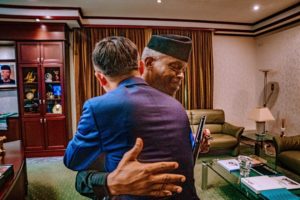 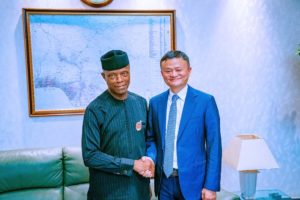 “I think you will find very energetic, very creative group of young men and women and older men and women who are increasingly interested in entrepreneurship especially digital entrepreneurship.
“So, the potential is tremendous, it is an incredible potential that we have. So, we are at a point, and your coming is very strategic, in our trajectory and in the progress of our country.
“I think, it is a very important moment and what we are seeing – a lot of entrepreneurship, a lot of young people who are very actively engaged in the digital economy at various levels.”
Continuing, the Vice President spoke about some of the steps already taken by the Buhari administration to support young Nigerians in the technology space in building skills and capacities to create opportunities for themselves and others.
He said, “But just as I said earlier, one of the critical things for us is that with a huge population and so many people living in the rural area, we have major issues around financial inclusions for large numbers of our people. And so making payments or doing financial transactions across the country presents a challenge which we have to meet.
“The point you made is important, namely, that Government must provide the infrastructure for purposes of enabling the entrepreneurs to do more effective business.
“So, that is one of the critical areas for us. We have a programme that is called Broadband Connectivity for all by 2023 which is basically to see how we can deepen connectivity for all.
“We are also looking just as you said about e-government, that’s also crucial because government tends to be viewed with a great deal of suspicion, nobody is quite sure of what the government is up to all the time. We think that government can benefit from the efficiencies that the digital economy provides.
“So we are at a point where we are also looking at how to revolutionize government businesses so that we can do more in terms of business with the ordinary citizens, give more information, do more transactions, get passports and licenses and approvals online and that kind of thing.”
Speaking specifically about the impact of the Federal Government’s N-Power programme the Vice President said, “We started a job programme for young people called N-Power where we engaged half a million young people.”
“We wanted to build the E-frastructure to make this happen, so we gathered a group of young entrepreneurs, so they put together the system which enabled us to engage the half million people.
“We pay them online, we teach them online, we put materials in open portals for them so that they can actually access these portals. They also have equipment (like the one I have) which helps them to train as extension workers for farms. They also work as teachers, so, we train them also using these open portals and all others and it proved to be tremendously successful,” he added.
Earlier in his remarks, Mr Jack Ma who made very commendable remarks about Nigerian entrepreneurs said he had always looked forward to visiting the country.
He said his company was working on promoting technological innovation in the areas of E-frastructure, Entrepreneurship, E-governance and Education in Nigeria and other African countries.
Mr Ma disclosed that four Nigerian technology entrepreneurs are among top 10 African entrepreneurs to be supported by AliBaba Group.

Director, Councillor, others in trouble over workers’ salaries