It all started with the video of eight years old Success prefering to be caned to missing school. She was sent home for her parent’s inability to pay a N900 examination fee.
A public outcry followed.
However, the viral video on Success, her clear innocence and desire for education above the temporary pain from the whip, has made her an instant success with many falling over themselves to spnsor her education.
But it has also put the Delta State government in a tight spot as another viral video has shown apparent neglect of the Okotie Eboh Primary School 1, Sapele, where Success schools.
The video is a tale of unconscionable abandonment of hundreds of pupils by a government that prides itself in infrastructural development.
Swiftly, however, the State Government has commenced renovation work on the school as fingers are pointing in the direction of civil servants for the neglect, and heads are beginning to roll.
The head-teacher is on suspension for charging illegal examination fees, though many suspect she is a scape-goat for the fresh video, that scandalises the state government. She acted as guide to a young lady who filmed the school, interviewed teachers, pupils, and staff.


More heads within and outside the school, sources fear, may roll over the neglect of the school and undue exposure, especially of the video chronicling the dilapidated and dangerous state of the public school, like many more in the State.
Last week, a social media user uploaded a video of a passionate and disgruntled little girl, Success Adegor who felt cheated for being sent out of class because she

defaulted in her school fees.
While this was not the first time that such stories and videos make it to the internet, however what took many who have now expressed interest to sponsor the little girl to whatever level of education she so desires is her willingness to receive strokes to stay in class.
Unlike the practice with some pupils who will rather run out of class even when not sent home just for the fun of play, Success told her interviewer that her parents were willing to pay and that the school authority should have whipped her rather than send her home for school fees.
As expected, the video went viral with celebrities and other good spirited Nigerians promising to take over the sponsorship of her education and some others who might be in similar pitiable situation.
Within two days, she turned a mini celebrity. Their Sapele home quickly wore a Mecca kind of tourist attraction. Guests of various calibre flooded her home. Like baby Jesus, several gifts ranging from school fees, school bags, book, cash and promises of scholarship flowed her direction.
The following day, Success displayed her new school bag with gratitude to the kindhearted Nigerians.
As Nigerians continue to show support for Success wellbeing, a Dublin based Youth leader, Mr. Lucky Fasa Eghagbevwa has moved a step ahead in preparing a successful life for Success. FASA has opened an account for her at First Bank PLC, Sapele, to enable her save whatever she has earned and will continue to receive. Though, Success is eight, the likes of Fasa has successfully planned a better future for her through Fasa Hope Foundations/ Fasa Volunteers for Oboro.
It is worthy of note that this is not the first time Mr Lucky Fasa Eghagbevwa is opening bank accounts for children. In July 2018, he opened over 30 bank accounts for children in Christ Hope Academy, Ekpan. Uvwie Local Government Area, Delta State.
When news men contacted Mr Lucky Fasa, on why he opened this account, he simply said that miss Success needs an educational trust fund rather than spending the money she is getting now for unnecessary things.
Consequently, the Delta State Government has since began the renovation of Success’ school and had sanctioned the head teacher for demanding illegal fees from her pupils.
For those who are willing to donate their token towards Success educational fund should make their donations to this : Account no is :3135820709
Account name: Adegor Success
Bank: First Bank, Sapele
Meanwhile, the Delta State government has suspended the headmistress of Okotie-Eboh Primary School 1, Sapele Local Government area of the state, Mrs Vero Igbigwe.
She was suspended following the viral video where little Success Adegor was sent home over her parents’ failure to pay her examination levies.
Igbigwe was suspended on Monday when the Delta State Commissioner for Education, Barr. Chiedu Ebie visited the school.
The head teacher, according to the commissioner, could not explain the alleged illegal collection of examination levies from the school children. 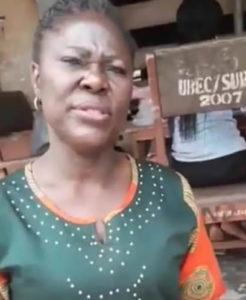 
Ebie told journalists after his fact-finding mission to the school that a detailed investigation would be conducted to unravel the role of the teacher and any other person that was involved in the illegal levy collection.
He said Mrs Igbigwe would remain suspended pending the outcome of the panel report that will be set up to thoroughly investigate the incident.
According to him, “There is right to fair hearing. So, what will happen is that a detailed investigation would be set up to look into the issue in details.
“Like I did say, I conducted a preliminary investigation but in the interim we have to suspend her (Mrs Igbigwe) as the head teacher of this school pending the outcome of the investigation.
“That suspension will take effect as from today (Monday). Obviously, there are contradictions in her story because everybody was there when they talked about school fees. It was obvious that Success was sent home because of her inability or her parents to pay the supposed fees which is not in any way part of the 2018/2019 levies.”
The commissioner added that the state had since awarded the construction and upgrade of the school structures before the video of Success being driven home went viral last week on the social media.
Ebie, a lawyer, added, “First of all, you need to take into consideration that we are not just dealing with one school. In Delta State, we have 1,125 public primary schools; we have 465 public secondary schools and six technical colleges. It is not humanly possible to attend to all of them at the same time. What we do is that we deal with them in phases.”
He was accompanied on the visit by the Chairman of Sapele Local Government Council, Chief Eugene Inoaghan, a former state Commissioner for Housing, Chief Paulinus Akpeki, and other top officials of the ministry.
▪Additional reports by The News Guru and Warri Today