It is time to send the All Progressives Congress (APC) adminstration packing wherever it is found as far as Dr. Jennifer Douglas-Abubakar is concerned. Wife of Peoples Democratic Party (PDP) presidential candidate, Alhaji Atiku Abubakar, restated her position, Monday in Port Harcourt, Rivers State.
She adds: “Great people of Rivers state, thank you for your immense support and for standing by your governor. I am rest assured that Rivers state will deliver their votes for PDP at the forthcoming presidential elections.
“We don’t have to beg for your votes, I know Rivers state is hundred percent PDP. Come out and vote en mass, bring your children, your husband and all your households, don’t just vote stay and protect your votes. Don’t let them  take away your vote. Women come out en mass let us send them parking”.
Jennifer spoke on a day that fifty-eight  governorship candidatess from various parties said they are adopting Atiku Abubakar and Nyesom Wike as their candidates.
According to them the alliance is as a result of their good works. They described Wike as ‘Mr Excellent project’ stressing that their withdrawal from the race is to ensure that the elections in Rivers state is peaceful.
On his part, the Governor of Rivers state, Nyesom Wike described APC as darkness and PDP as light, adding that APC is known for dictatorship but PDP will guarantee everyone’s freedom.
Mrs Abubakar appreciated the people of Rivers state for their support for their governor and love for Atiku. 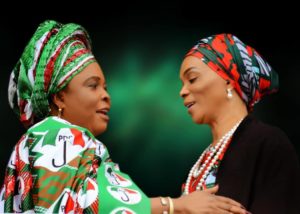 Meanwhile, Alhaji Abubakar Atiku has assured that the PDP would not make vain promises as the APC did in 2015 to deceive the people. He said his government will provide jobs, revamp the economy, tackle insecurity and will be gender sensitive.
On his part PDP’s National Chairman, Prince Uche Secondus while speaking at the rally said, “Kano has fallen, Kano is now 100 percent PDP.”
Secondus said the myth and belief that Kano was the stronghold of Buhari has been shattered with the huge crowd at the Kano stadium.
The PDP National Chairman further assured that, the current analogue government must be voted out to a more efficient digital government.
“This analogue government must be changed to a digital one. APC is going, and PDP in taking over. “Buhari is insensitive of the security challenges in the country. He is not aware that the Kano governor is deeply engrossed in corruption”, he said.
The Senate President who doubles as PDP campaign Director General, Bukola Saraki, called on Rivers people to come out en mass and deliver the vote that will take Atiku to Aso Rock. He avered that Atiku will remove poverty from the land, revamp the economy and create jobs for the youths. He called on them to ensure they don’t just vote but defend their votes as well.