The Peoples Democratic Party (PDP) cautions the Chief of Army Staff, Lt. Gen. Tukur Buratai, to refrain himself from acts or actions that will suggest in any way that the military has become an arm of a political party.
Speaking with army commanders and principal staff officers this Wednesday, the army chief said soldiers and officers that were not ready to be loyal should leave the force by 22nd February before Saturday’s election.
His words:  “One of our core values is loyalty to constituted authority. It is unfortunate to hear persons who are aspiring to rule this country are inciting the army to disobedience,” he said.
“We have consistently stated our position in the political dispensation to remain neutral and apolitical. However, direct and public incitement of the Nigerian Military against democracy and constituted civil authority will not be tolerated.
“I request such persons to withdraw this inciting statement. Let me reemphasize loud and clear, that the Nigerian Army is a professional army. The foundation of military professionalism is discipline and without discipline an army cannot stand. Loyalty must be hundred per cent.  I shall leave you in no doubt as to our resolve to bequeath a professionally responsive army to Nigeria and Nigerians.
“Should any officer or soldier have doubts as to his loyalty to the Nigerian state as presently constituted, such a person has up to 22 February 2019 to resign. There is no room for indiscipline or disobedience to lawful orders in the army today.” 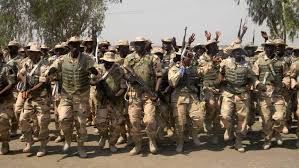 The PDP, in its statement by spokesman, Mr. Kola Ologbondiyan, says Gen. Buratai’s allusion to Atiku Abubakar, as well as his threats to officers and ranks to execute the unlawful order by President Muhammadu Buhari to participate in the electoral process is an aberration of our laws and a recipe for crisis.
The PDP states that Atiku Abubakar spoke on the side of the law and wishes of Nigerians and cannot be intimidated by any body no matter how highly placed.
“Gen. Buratai is counseled to note that the loyalty of the military is to the state and that the President lacks the powers, under our laws, to deploy soldiers for the conduct of elections.
“Our party urges Gen Buratai to concentrate on his very demanding assignment of protecting the territorial integrity of our nation and ending insurgency rather than dabbling into partisan politics at the risk of our national cohesion.
“It is imperative to state that by trying to drag the military to participate in the February 23 Presidential elections, President Buhari plots to suspend our constitution, assume the position of an emperor, trigger unrest, subvert our electoral process and derail our democracy.
“The party directs President Buhari to the judgment of the Federal High Court, Lagos on March 23, 2015, wherein the court, presided over by Justice Ibrahim Buba, directly outlawed the deployment of troops in the conduct of elections in our country.
“President Buhari should also avail himself of the subsisting judgment of the Court of Appeal, which on February 15, 2015, held that the President has no powers to deploy soldiers in the conduct of elections.
“The PDP further counsels President Buhari and Gen. Buratai to end their rationalizing of military option, as the courts have summarily dismissed their arguments that soldiers are needed to guarantee peaceful elections.
“It may interest President Buhari to know that the judgment was sequel to a suit filed by the APC Leader in the House of Representatives, Femi Gbajabiamila, seeking a declaration that deployment of soldiers during elections is illegal and unconstitutional.
“In case, President Buhari is not aware, as usual, the court directly held that “the Armed Forces have no role in elections” and if soldiers must vote, they must do so in their barracks.
According to the court, “the time has come for us to establish the culture of democratic rule in the country and to start to do the right thing particularly when it has to do with dealing with the electoral process, which is one of the pillars of democracy.
“In spite of the behaviour of the political class, we should by all means try to keep armed personnel and military from being a part and parcel of the electoral process.
“The state is obligated to confine the military to their very demanding assignment, especially in this time of insurgencies by keeping them out of elections”, the court held.
PDP added: “The priming of the military ahead of the election, therefore, heightens the fear of plots by the APC to plunge our nation into crisis and use security forces to subjugate Nigerians, seeing that President Buhari has no chance of winning the February 23 Presidential Election.
“The PDP therefore cautions President Buhari not to allow his desperation to push him to corrupt the patriotism of our military and use them against innocent Nigerians, whose only demand is for a free, fair and credible election.
“We urge the international community to note the roles being played by President Buhari, his Federal Executive Council and Gen. Buratai in our electoral process.”