By Emma Agu
Cyprian Ekwensi’s novel: Survive the Peace was premised, among others, on the disrupted family ties and social relations that emerged in Igboland, after the Nigerian Civil War. Those of us, who witnessed the war, albeit as kids, will confirm that things actually went awry: Brothers turned against brothers; most time, as they squabbled over resources that were, indeed, very scarce. Unfortunately, while in some cases, the enmity caused by the situation has petered out, in others, erstwhile harmonious relationships have been destroyed forever.
By some surprising amnesia, sadly, today, some of those who witnessed that low era, in Igboland, seem not to have properly digested the lessons of the period hence the stage is set for a repeat of that history. This time around, it is the countdown to the 2019 elections, a period that is, again, pregnant with unfathomable forebodings, as Igbo brothers squabble over the best strategy to confront what many regard, as an existential challenge.
From the current fireworks, ignited by the recent endorsement of Alhaji Atiku Abubakar, the presidential candidate of the Peoples Democratic Party, PDP, by the Ohanaeze Ndigbo, over and above the incumbent President Alhaji Muhammadu Buhari of the All Peoples Congress Party, APC, it is obvious that, no matter the outcome of the elections, things will no longer be the same again. While the pro-Atiku groups do not see anything wrong with the Ohanaeze position, those in the pro-Buhari camp disagree vehemently with and, in fact, reject the endorsement. Those who want to dismiss the disagreement with a wave of the hand should be concerned that Barrister Uche Okwukwu, the secretary general of Ohanaeze, has endorsed President Muhammadu Buhari, obviously conveying the lack of consensus on such a serious matter.
For those who do not know, Okwukwu is an unapologetic pro-Igbo Ikwerre man from Rivers State; he is one whose Igbo DNA has not undergone any mutation, even if you prefixed his first name “Uche” with an “R”, to read Ruche! It is against this background that the reported suspension of Okwukwu, last Friday, should be viewed as not just a dangerous escalation of a worrisome crisis but a questionable strategy for resolving an impasse that could have been averted, had Ohanaeze Ndigbo not been dragged into the murky waters of partisan politics.
Here again, history appears to be repeating itself, as this looks like a throwback to the situation just before the 1979 elections when the leadership of Ohanaeze, at the time, endorsed the Shagari-Ekwueme ticket. Predictably, Ohanaeze went comatose after that incident, only to be revived in 1983. Let us hope that the body is not being railroaded into another state of suspended animation! It is interesting to note that the great ZIK of Africa, Dr. Nnamdi Azikiwe, was on the ballot as the presidential candidate of the defunct Nigerian People’s Party, NPP, the same year Ohanaeze endorsed Shagari. This time around, by some poetic coincidence, Buhari was at Onitsha, Anambra State, commissioning the Zik Mausoleum, a project that had been abandoned for over 20 years, just as the Nnia Nwodo-led Ohanaeze leadership was publicly endorsing Atiku Abubakar. History!!!
Passions are understandably very high at the moment with each group posturing sanctimoniously, as the moral beacon of the Igbo society. This is particularly the case with those who support the Ohanaeze President, the erudite Dr. John Nnia Nwodo who, in turn, sees himself, not without justification, as the repository of the sovereign socio-cultural authority, of the Igbo nation. Curiously, that is the source of the problem: his authority is socio-cultural, not political. The Ohanaeze leadership was never intended to usurp the role, of political parties, to openly canvass for votes, in a purely partisan fashion. Those who take this line of argument have a strong point, for several reasons. 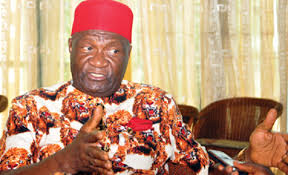